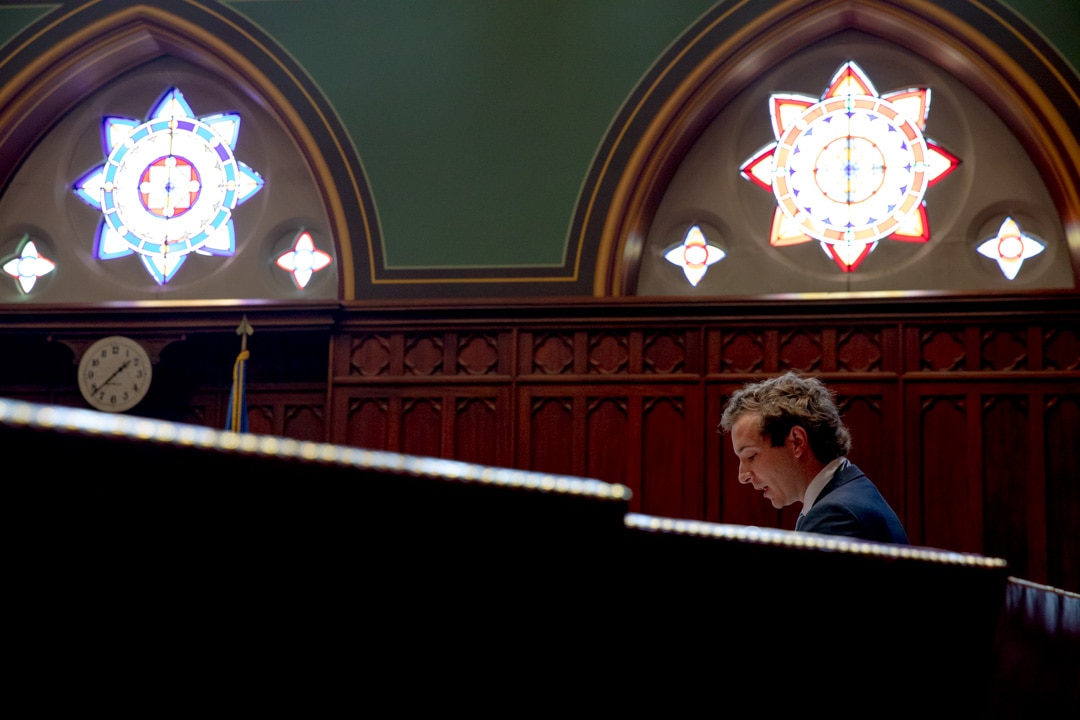 Sen. Will Haskell, D-Westport, argued that minimizing crowds at the polls by allowing people to vote by absentee ballot contributes to public safety.

Meeting for the first time since COVID-19 forced the closure of the State Capitol in March, the Connecticut Senate voted  35-1 Tuesday for final passage of legislation allowing no-excuse absentee ballot voting as a public health precaution in November.

Gov. Ned Lamont promised to quickly sign the measure that temporarily expands the definition of “sickness” in state voting law to cover concern over getting COVID during the pandemic, rather than being ill and unable to vote. It gives every voter the ability to vote by absentee ballot. An executive order provides voters with the same option in the August 11 primary.

“This legislation recognizes the unique moment we’re in,” said Sen. Mae Flexer, D-Windham, who presented the bill to the Senate as co-chair of the Government Administration and Election Committee.

Flexer, the mother of a newborn, said she found it nerve-wracking to return to the Capitol, despite the many precautions in place for a special session on a limited agenda of four bill adopted last week by the House, including a sweeping police accountability bill drafted in response to the police killing of George Floyd in Minneapolis.

“That fear, that concern informs why we are here today,” she said.

The House passed the bill, 144-2. The sole dissenter in the Senate was Sen. Dennis Bradley, D-Bridgeport, who cited concerns over the potential for fraud from the liberalized use of absentee ballots and the secretary of the state’s intention to mail absentee ballot applications to every registered voter.

“In urban areas, where there’s such a transient community and people move on a regular basis, that makes it ripe for more fraud,” Bradley said after the vote.

Flexer introduced the bill to a nearly-empty chamber under rules adopted for the special session. Only eight of the 36 senators were permitted in the chamber at one time, with the rest scattered around the Capitol, listening to the debate in offices and conference rooms. 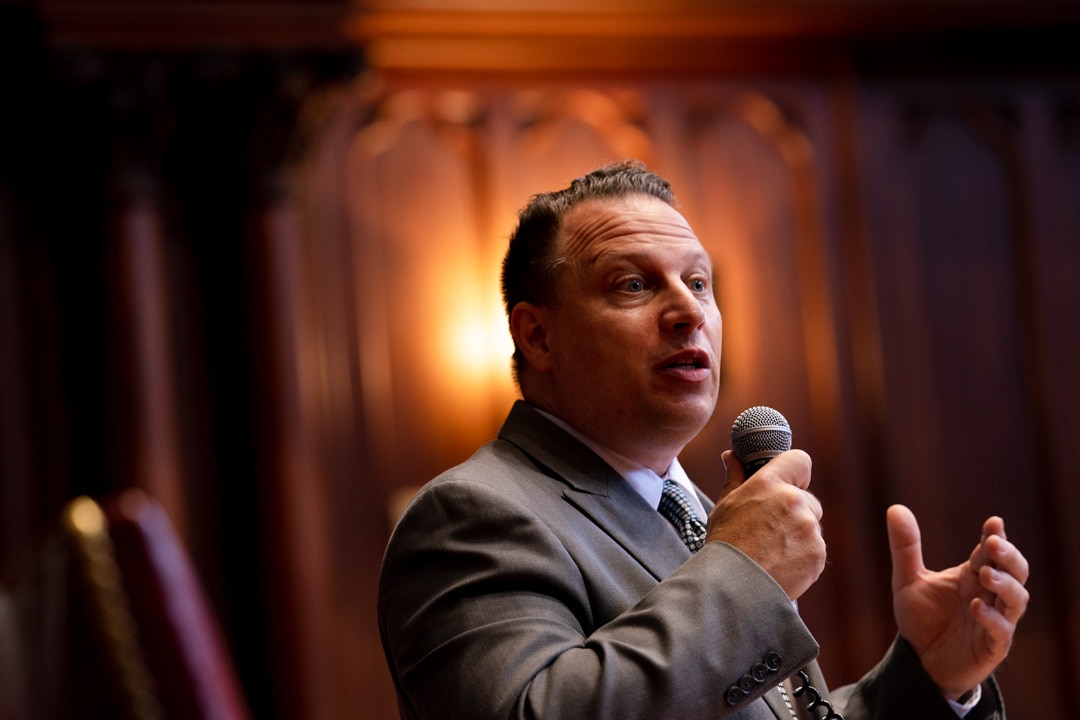 The overwhelming vote belied the continuing doubts some Republicans have about nudging he electorate toward what will be a mix of early voting and voting by mail. Voters will be able to cast their absentee ballots by mail or at locked drop-in boxes outside municipal offices.

Sen. Rob Sampson, R-Wolcott, the ranking Senate Republican, voted for the bill after complaining at length about its provisions, questioning the extent to which it protects public health, and objecting to the fact that the Senate was foreclosed from making amendments without killing the measure.

The House ended its special session after passage last week, meaning the Senate could only pass the bill in the form adopted by the lower chamber. Sampson said that act by the House disrespected the Senate and the legislative process. 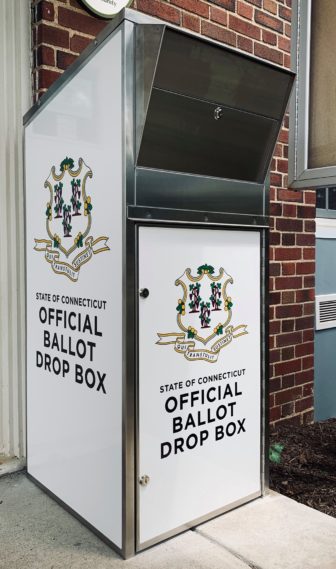 Sampson nonetheless offered amendments, including one that would have struck a section allowing the use of secure drop boxes at town halls for collecting absentee ballots. Sampson questioned whether they were truly secure. Sen. Dan Champagne, R-Vernon, said the drop boxes themselves could spread disease, since they are not touch-free.

Another amendment would have barred Secretary of the State Denise Merrill from a mass mailing of absentee-ballot applications for November, as she did for the August primary.

Both failed on 22-14 party-line votes, defeated by the Democratic majority.

Sampson said the broader use of absentee ballots creates a greater risk of fraud. He questioned why the new bill  allows anyone to vote by absentee, rather than only those with compromised immune systems.

“At issue is whether or not this is really necessary for every voter,” Sampson said.

Sen. Will Haskell, D-Westport, replied that precisely determining who is at risk is impossible, and that anything that minimizes long lines at the polls contributes to public safety.

Sampson complained that a provision clarifying the rights of voters who use the state’s election day registration law could lead to long lines and runs counter to the overall goals of the bill. That provision says a voter can cast a ballot if they are in line to register by 8 p.m. It would allow municipalities, who now do election-day registrations at city or town halls, to offer a second location.

“It’s about strengthening our democracy for all,” Haskell said.

He noted the cases of COVID outbreaks tracked to the polls in other states.

“In Connecticut, we can, we will do better today,” he said.

Other Democrats bemoaned that the bill’s provisions are temporary and limited, doing too little to undue Connecticut’s status as having some of the most restrictive rules in the nation regarding the use of absentee ballots. Sen. Alex Kasser, D-Greenwich, said Connecticut is a small circle of states that bar early voting and other measures aimed at easing voting. 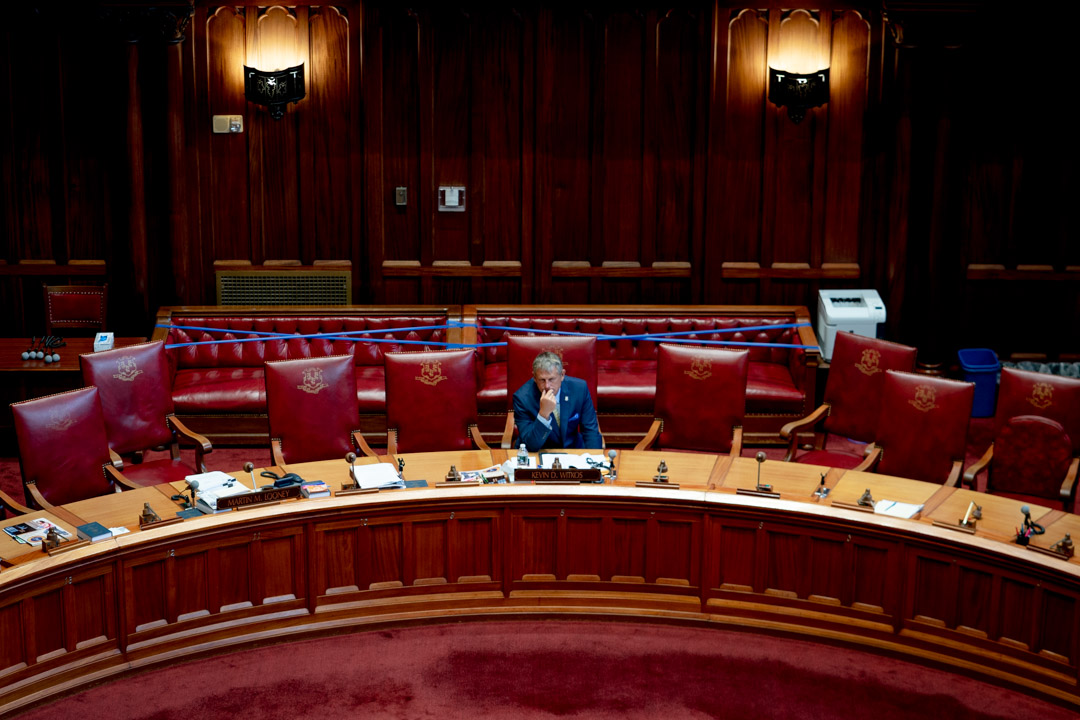 Merrill applauded the passage, but agreed it was a modest change.

“The legislature should act this year to pass constitutional amendments for these reforms with a supermajority and let the voters decide in November,” Merrill said.

In 2014, voters in Connecticut rejected what Merrill called a poorly worded amendment — it talked about removing restrictions on absentee ballots and not early voting — by a vote of 491,447 to 453,070.

The legislature voted last year to place a simply worded constitutional amendment referendum on the ballot: “Shall the Constitution of the State be amended to permit the General Assembly to provide for early voting?” But unanimous Republican opposition in the Senate blocked the super-majority necessary to immediately place the measure before the voters.

Without a three-quarters majority in each chamber, the amendment must be passed by two successive legislatures. If the legislature passes it again next year, the question would go on the ballot in 2022.

Sen. Eric Berthel, R-Watertown, who backed a lawsuit aimed at a stopping Merrill from allowing the use broader use of absentee ballots without legislative action, said he always favored allowing no-excuse absentee balloting during the pandemic, assuming it is done legally.

“No one is trying to suppress your vote. No one is following an agenda from Washington, D.C.,” Berthel said. “That is hogwash.”

The Office of Legislative Research analysis of House Bill 6002.