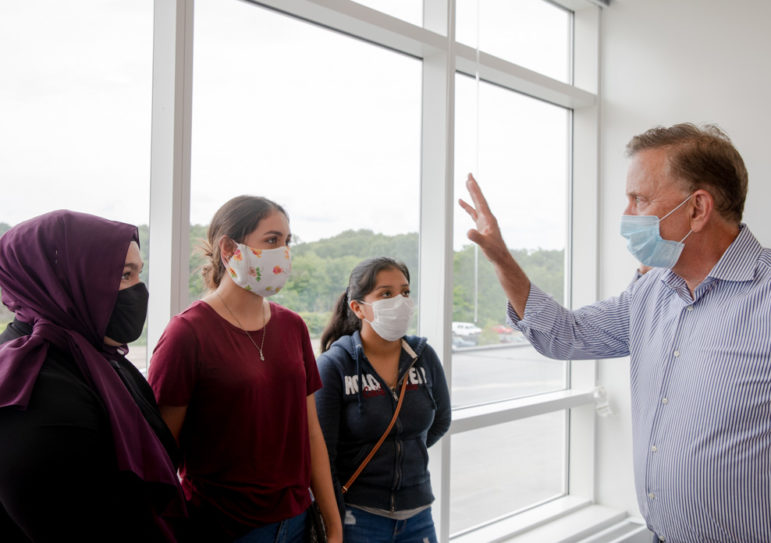 Flanked by an expansive collection of children’s books in Winchester’s Pearson Middle School library, Gov. Ned Lamont reiterated on Tuesday his wish that Connecticut schools reopen for in-person learning, provided children and communities can be protected from COVID-19.

“Our kids have earned the right to be able to go into a classroom and see their friends, and be with a teacher and have real, in-classroom education,” Lamont told reporters at a news conference on Tuesday afternoon, praising residents’ efforts to lessen the spread of the virus. He has been making the case for in-person schooling for weeks.

Hours earlier, the State Board of Education adopted a resolution that prospectively authorizes shortening the 180-day, 900-hour school year and identifies public health indicators aimed at safeguarding in-person instruction for Connecticut students. The resolution gives local districts guidelines to use when deciding whether they will offer full-time in-person or remote learning, or a hybrid approach, a weekly blend of in-person and remote learning.

Each district must base its decision on the guidance provided by the Department of Health and the State Department of Education, or explain to officials why they should be granted an exception.

In a public comment addressed to the board at the beginning of the meeting, Gwen Samuel, founder and president of the Connecticut Parents Union, expressed concern that reducing instructional hours would widen the gaping achievement and opportunity gaps between Connecticut’s most vulnerable and privileged children, and lead to decreases in funding for already under-resourced schools.

At his news conference, Lamont touted the 100,000 Chromebooks the state purchased for students, pledging that no child would be “left on the wrong side of that digital divide.”

The board amended its resolution before unanimously passing it. The new language states that regardless of whether students’ learning is in person, remote or a mixture of the two, the district’s instructional framework must have “equity at its core.” For the board to authorize hybrid or remote programming because of a surge in COVID cases, school districts must have rigorous learning and engagement opportunities that give them access to the necessary academic and social supports.

A spokesman for the Department of Public Health said the agency was putting together the seven-day rolling average figures by county but the data is not yet publicly available. Figures recently released by the governor’s office show that, as of last Monday, all Connecticut counties are in the low-risk category.

Secondary indicators include the number of new COVID-19 hospitalizations, the testing positivity rate for  the virus and surveillance of COVID- and flu-like illnesses. Officials should also consider the physical layout of each school; the ability to group students into small cohorts to minimize their interaction with other groups; staff and students’ adherence to self-screening measures; whether the building has an HVAC system; and whether schools have adequate supplies and plans in place to clean and disinfect the buildings.

The Department of Public Health will update the indicators each week. The resolution provides a framework for school districts to follow and allows them to offer in-person, remote or hybrid models of learning based on metrics tracked by state officials.

District and individual school reopening decisions will be made at the local level, but those whose indicators fall in the “low” and “moderate” risk categories and choose to offer only remote learning must explain why they want an exception to representatives from the state Board and Department of Education and the Department of Public Health.

“The governor felt very strongly, as do we, that every effort should be made to bring students into school, especially students with special needs,” said state Education Commissioner Miguel Cardona.

Much of the discussion on in-person learning is focused on the beginning of the school year, Cardona said, but the resolution allows districts to stay nimble later in the school year and tailor their instruction to the realities imposed by the pandemic.

“It’s important that we kind of wrap our heads around the fact that for the foreseeable future, nothing is going to be set in stone, that we have to be prepared to react to what our health data indicates, and any other factors that might influence health and safety,” he said. 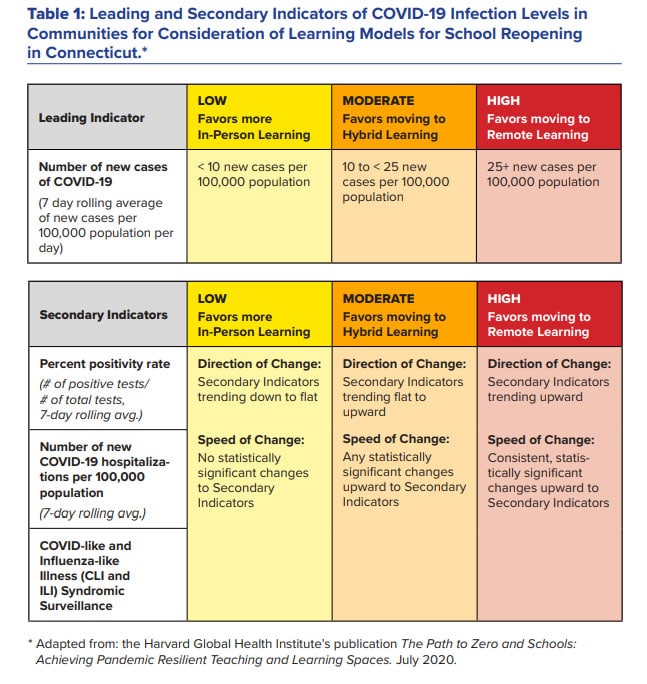