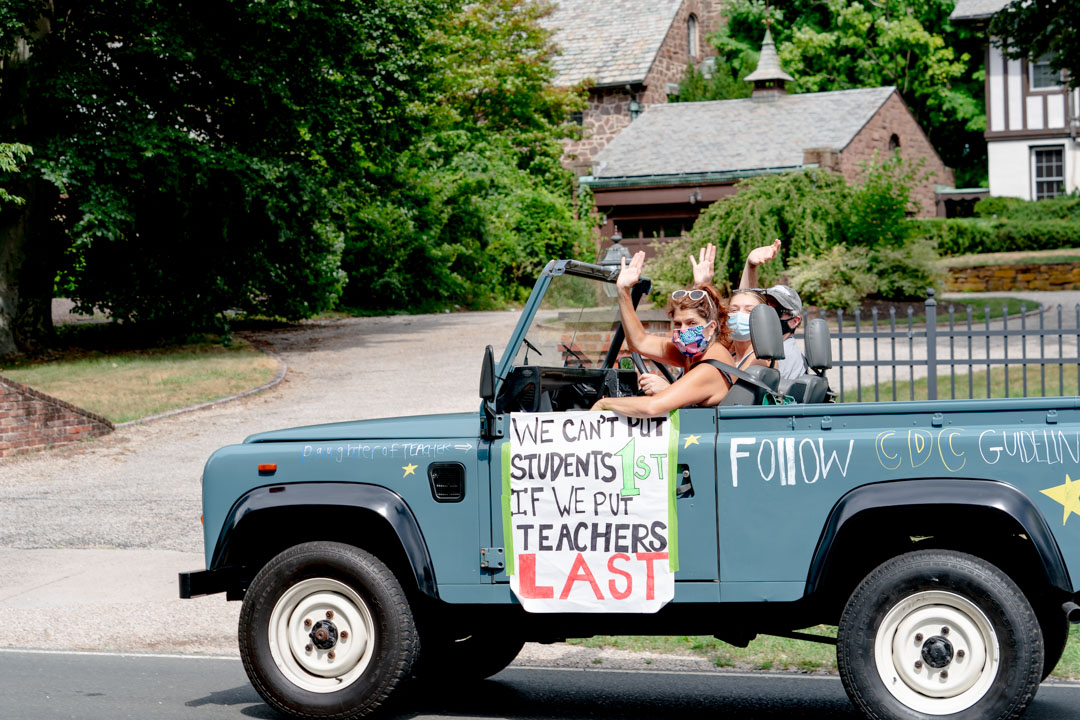 Gov. Ned Lamont continued to walk back state authority over whether schools will reopen this fall, saying Thursday that he wants all schools to reopen for in-person learning, and superintendents that refuse will be subject to “a really forceful discussion.”

But in the end, he’s leaving the decision local.

The announcement is the latest of a litany of contradictory announcements as the state has tried to iron out guidance for school reopening. In late June, the governor declared that all schools would be required to reopen for in-person instruction, so long as COVID-19 remained in check. On Monday, Lamont announced that instead, he would leave it entirely up to local officials to determine whether to reopen schools. 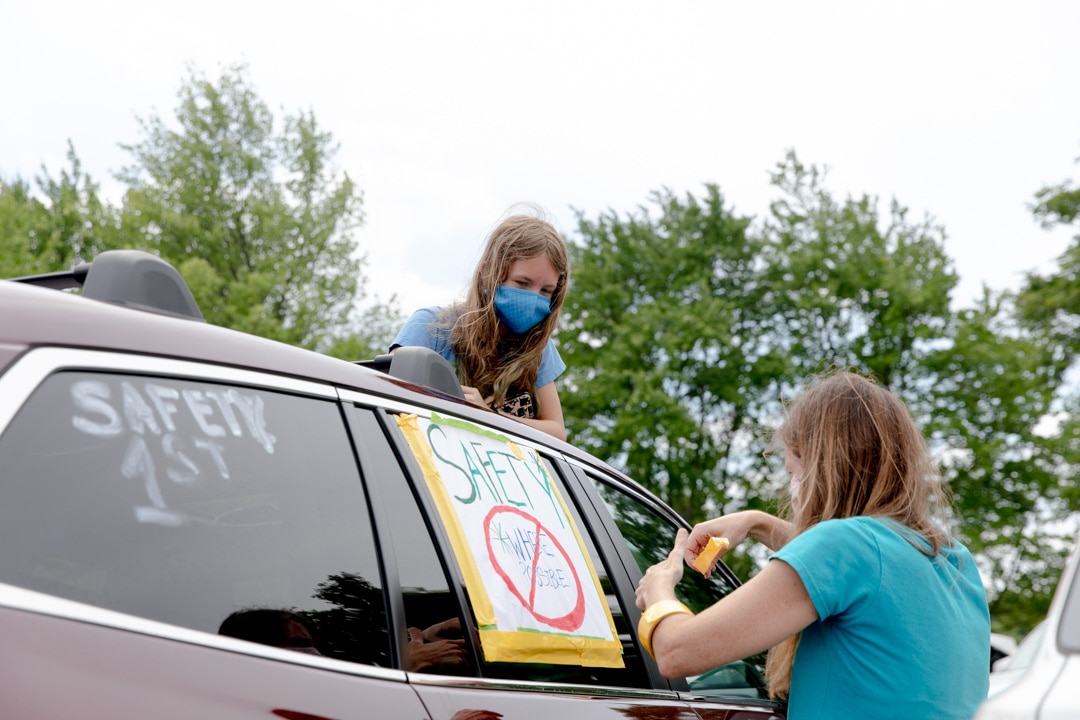 Jennifer Zirbel, right, a teacher at CREC International Magnet School, puts on a sign with her daughter, Sarah, 11, before participating in the car caravan starts on July 30.

Throughout this time, teachers – and their unions – have been adamantly opposed to schools reopening until a cohesive strategy is in place to regularly test students and staff for COVID-19, social distancing can take place, and other safety procedures are implemented.

As the governor’s views have shifted, the unions have remained consistent: on Thursday afternoon, hundreds of teachers across the state participated in 30 car caravan protests to step up pressure on their local officials to delay reopening schools, some of them leaving a meeting with Lamont to join in.

“Six feet apart or no school restart,” a sign from the Hartford protest read.

With pressure building on local officials to keep schools closed in the fall, Lamont’s announcement – with University of Pennsylvania Vice Provost for Global Initiatives Ezekiel Emanuel joining for backup – reiterated the state’s position, but without teeth to enforce it. They pointed out that public health experts have said it is safe enough to return and emphasized the negative impact closures will have on the state’s most vulnerable students.

When school closed last spring, one-in-4 students either didn’t participate in remote learning at all, or only did so very minimally, according to a survey completed by the state of nearly every school district.

School districts with high proportions of students from low-income families have seen the largest share of students who went MIA, either because they didn’t have internet access or a computer to participate in remote learning. Competing priorities at home — such as a family member losing their job, a sibling watching younger students, or an illness — also are hindering student participation in remote learning, according to the survey.

Lamont also emphasized challenges that are even harder to quantify and address, such as lack of student interest, and lack of parental understanding and support.

“If a kid has a chance to get to a classroom, I want that kid to have the opportunity to be in a classroom,” he said.

Emanuel seconded Lamont’s assessment, citing the increased educational attainment, socialization, and access to social services that in-person schooling brings. He said that Connecticut has been successfully implementing steps to control COVID-19, including closing nonessential businesses and mandating mask wearing, and the addition of in-school precautions such as distancing measures will make a safe return to school possible.

“Connecticut is in a perfect place to open up schools, given its low transmission rate, and low test positivity rate,” Emanuel said.

The state reported just six new COVID-19 deaths in Connecticut on Thursday, and 130 new cases, compared to nearly 1,500 deaths and 63,255 new cases nationally. There were 13 new hospitalizations after a streak of days where numbers dipped, for a total of 66 COVID-19 cases inpatient.

There’s also been a spike in positive cases among younger age groups, Lamont said. In the last week, the number of people ages 10-19 who tested positive for COVID-19 doubled, he said, with an upsurge in the 20-29 age group as well. He blamed many of these cases on irresponsible behavior such as partying. 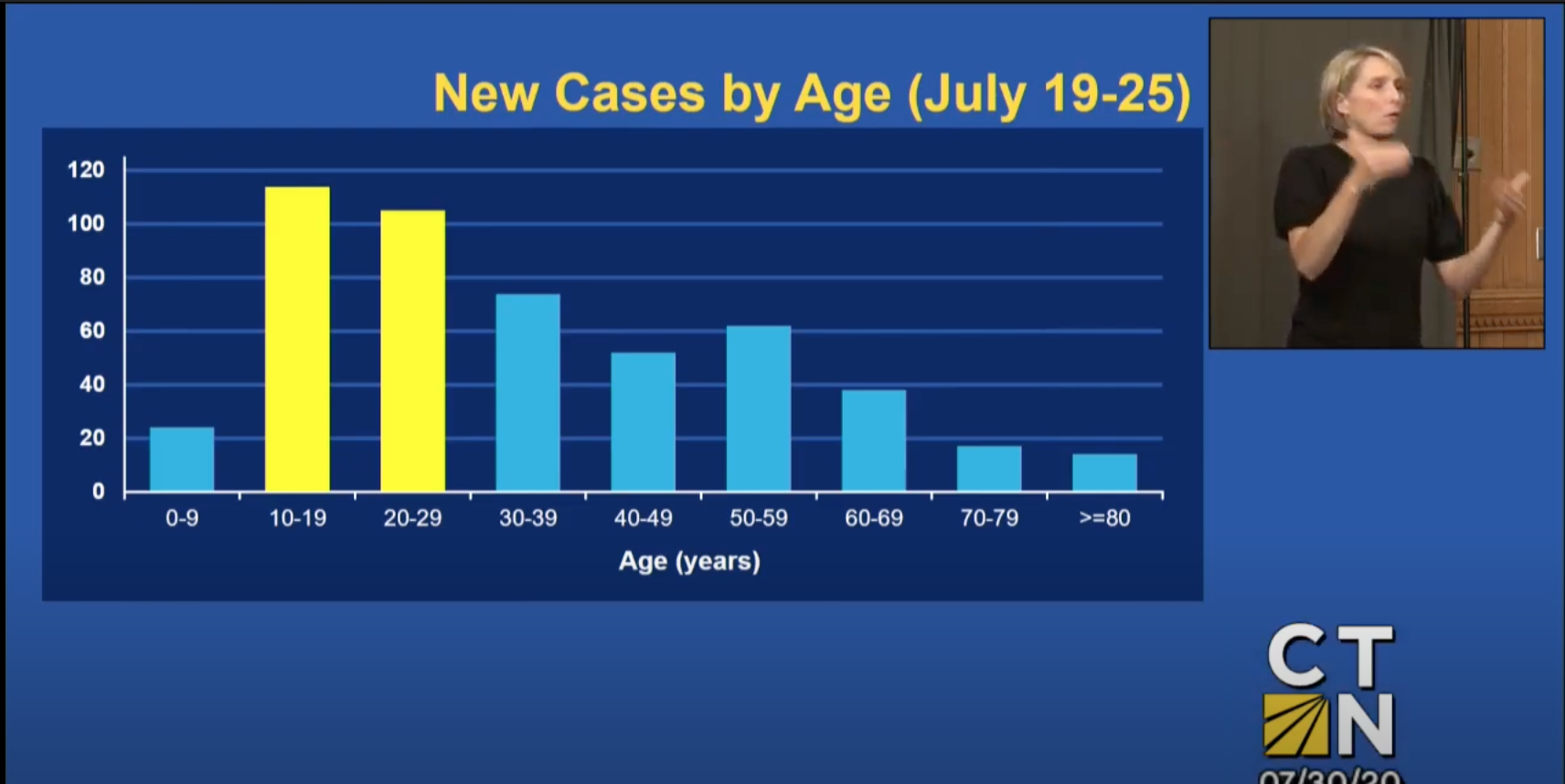 Despite these trends, Lamont maintained his hard stance on school reopening, punting the responsibility to parents for explaining to their kids why COVID-19 protocols are important and encouraging them to follow them, and cracking down when they make irresponsible decisions.

“The power of shame is very powerful, more than anything I can do by edict or punishment,” he said.