But controversy over handling of allegations against his rival continues 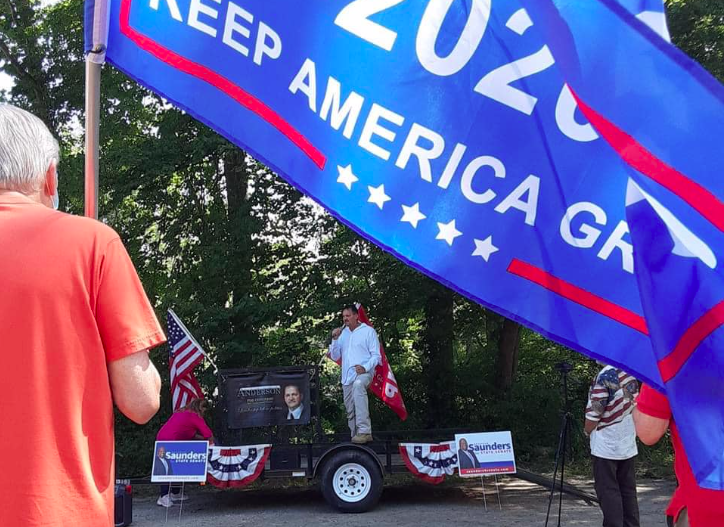 Justin Anderson sees President Trump as a boost, not a burden, in 2020.

The results spare the party an awkward debate over how to fill the vacancy expected had Gilmer won a primary roiled by news that broke as voters went to polls a week ago: Gilmer had been arrested the previous night, and he intended to decline the nomination if victorious.

Anderson, whose only previous elective experience was winning a spot on the Planning and Zoning Commission in East Haddam, began the day as the loser by fewer than 20 votes. It ended with him the official winner by less than one-half of a percentage point, 9,483 to 9,402

“This has been insane,” Anderson said.

The victory does not resolve questions over the collateral damage suffered by the nominee, the party and its leadership over their handling of a video that purports to show Gilmer assaulting a former girlfriend in 2017.

J.R. Romano, the state party chair since 2015, faces calls for his resignation from prominent Republicans, including the party’s 2018 gubernatorial nominee, Bob Stefanowski; and a potential contender in 2022, House Minority Leader Themis Klarides, R-Derby.

Meanwhile, other Republicans, such as Sen. Paul Formica of East Lyme and Rep. Rosa Rebimbas of Naugatuck, say that Anderson’s effort to use the video to quietly force Gilmer from the race shortly before the nominating convention in May should disqualify him as well.

Anderson, who said he acted in good faith under difficult circumstances, said the only person responsible for the party’s difficulty is Gilmer.

“This is the one guy everybody should be mad at,” Anderson said in a telephone interview. “One person caused this, and that’s Tom Gilmer.”

Romano said he has no intention of resigning, though he expected to explain his actions Tuesday night at the regularly scheduled meeting of the Republican State Central Committee, which was to be conducted via a video conference due to COVID-19.

Removal requires a two-thirds vote, and no action was expected Tuesday. His two-year term expires next June.

One of the state central committee members who is not ready to join Bob Stefanowski in calling for Romano’s resignation is his wife, Amy Stefanowski. She also is the Republican town chair of Madison, where Gilmer lives.

“The person I’m upset most by is Gilmer,” she said.

Who would want the job?

Overlooked in the calls for Romano to resign is one unanswered question: Who would want to take the job?

Connecticut’s Republican Party is looking at its worst two-year fundraising cycle of the decade. A long streak of making gains in the General Assembly ended disastrously in 2018, a consequence of President Donald J. Trump’s energizing effect on Democrats.

And Republicans fear further state legislative losses in November with Trump at the top of the ticket. The Republican congressional nominee in the 2nd lost badly two years ago with 35% of the vote. 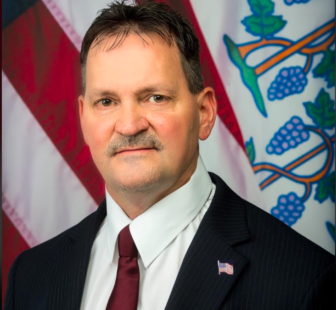 Justin Anderson, the winner of a recount.

Anderson, a retired correction officer from East Haddam with a second career in the National Guard, said that losses are not inevitable in 2020, calling Trump a boost in the 2nd District. Trump lost the district by 10,000 votes in 2016, his best showing in Connecticut.

The incumbent is U.S. Rep. Joe Courtney, a Democrat who unseated Republican Rob Simmons in the mid-term election of 2006, capitalizing on the unpopularity of President George W. Bush and the war in Iraq.

Over 14 years in Washington, Courtney has established himself as an effective advocate for the nuclear submarines built in Groton by Electric Boat, one of the district’s largest employers.

Anderson said credit for defense spending should go to Trump, the president Courtney voted to impeach.

“It’s biting the hand that feeds you,” Anderson said.

With Anderson’s recount victory, the question of whether he deserves the nomination is moot, at least as an issue before the Republican State Central Committee. Under party rules, it had the authority to name a successor had Gilmer won and then formally withdrawn.

But Romano’s actions — particularly his refusal to view the video — remain a matter of controversy.

In separate conversations before the nominating convention, Anderson offered the video to Romano, and his vice chair, Susan Hatfield, who is a state prosecutor and was the 2018 nominee for attorney general. Both declined to view it, and Gilmer easily won the nomination.

Romano said he urged Anderson to give the video to the police, which he eventually did. Wethersfield police charged Gilmer a week ago with first-degree unlawful restraint and second-degree strangulation, citing the video as key evidence. Gilmer denied wrongdoing.

Other than confronting Gilmer, who denied any wrongdoing and threatened Anderson with legal action, Romano said he felt unable to do more in May or the weeks since, given the unwillingness of Anderson or the former girlfriend to go on the record.

Romano consulted with no lawyer about Anderson’s approach to him, nor did he share the incident with any delegates. His decision has invited furious second-guessing by prominent Republicans who say he should have done more.

“He should have come to some of us who have legal training and said, ‘How should I handle this?’ ” said Timothy Herbst, a lawyer who finished fourth in the five-way GOP primary for governor in 2018.

Herbst said Romano should have put Gilmer and Anderson in the same room, then challenge Anderson to go on record and confront Gilmer with the video.

Saying nothing to delegates should not have been an option, said Herbst, whose relationship with Romano has been fraught since the 2018 election.

“Good people put their reputations on the line only to be soiled because relevant and serious information was withheld from them,” Herbst said. “Does anyone honestly believe that the outcome of the convention would have remained the same if party leadership viewed the video and made other party leaders and delegates aware of its contents beforehand?”

Herbst quoted Romano’s statement from March 30, 2018, when he called for the resignation of U.S. Rep. Elizabeth Esty, a Democrat, for failing to aggressively respond to allegations of abuse by a senior aide.

Romano said then that one cannot control the behavior of staff — but “what you can control is how you respond to it.”

“Chairman Romano was correct when he made this statement in 2018,” Herbst said. “And the same standard should apply to how he and state party leadership handled allegations of assault and strangulation as they relate to the endorsed congressional candidate in the 2nd Congressional District.”