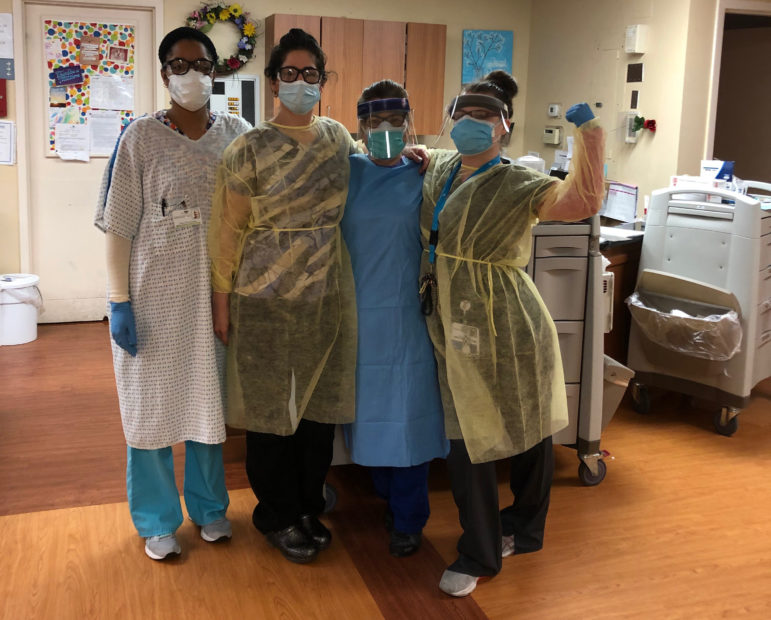 Some of the nursing staff at Parkway Pavilion Health and Rehabilitation Center in Enfield in the early stages of the outbreak.

COVID-19 hit nursing homes in the Northeast states particularly hard, but those living in Connecticut long term care facilities died more frequently than in any other state – a result of missteps by the state and a nursing home industry hamstrung by limited knowledge of the pathogen’s nature, how it spreads and to whom it posed the greatest risks.

While an interim report released by the state Tuesday makes no sweeping conclusions or findings of fault on the part of the nursing home industry or state government, it does identify a number of factors and phenomenon that contributed to the lethality and severity of the outbreak here, including a lack of testing and slowness in implementing a mask requirement at nursing homes.

“The Connecticut plan focused exclusively on hospitals and did not explicitly address long term care facilities,” says the 93-page document prepared by Mathematica, a policy research  consulting company hired by the administration of Gov. Ned Lamont. Another report is expected before October.

“Early responses to the COVID-19 outbreak were undermined by gaps in scientific knowledge about how the virus spreads, the range and severity of symptoms (especially in older adults), and underlying factors that might place an individual at greater risk,” the report observed.

Nevertheless, state guidance to nursing homes on infection control “tended to follow federal guidance rather than proactively respond to the rapidly evolving situation in Connecticut and neighboring states,” the report said.

It observed that Connecticut did not issue a universal masking order for personnel in all health facilities until April 4, the day after it was recommend by the federal coronavirus task force. New York moved faster, requiring universal masking for health workers three weeks earlier on March 13.

Further, vacancies in the state office charged with managing public health emergencies — six of the nine positions — contributed to problems in managing the pandemic, the researchers also found. There were related shortcomings in communication with the industry cited as well.

“We know now that limited COVID-19 testing capacity and limited scientific knowledge about the novel coronavirus during the first difficult months of this pandemic made it very challenging to contain the spread of COVID-19,” said Lamont in a statement. “Despite these limitations, CT made some very critical decisions in our response to COVID-19 that saved lives and improved public health.  Because of the hard work and sacrifice of long-term care workers, and residents and their families, we have seen a consistently low number of cases and deaths among staff and residents of long-term care facilities since early June.”

Lamont went on the say that “I am grateful for the thorough work done by Mathematica to help us learn from our response thus far so we can make improvements as needed as we work to avoid another surge in COVID-19 cases.  I look forward to reviewing the final report, and working with the long-term care industry to keep our residents and families safe from COVID-19.”

Industry leaders said they are reviewing the findings an plan to work with the state as it prepares for the next resurgence of the virus.

“There is much that can be learned from the interim report, including areas that will be further studied for the final report,” a joint statement from Matt Barrett, president of the Connecticut Association of Health Care Facilities and Mag Morelli, President of LeadingAge Connecticut. “We do want to point out that Mathematica has affirmed in the interim report, consistent with other academic and scientific findings, that the incidence of community spread of the virus is a key characteristic in determining COVID-19’s presence in elderly congregate settings like nursing homes and assisted living communities. In this regard, the two associations continue to urge Connecticut residents to stay the course on the known strategies to keep community spread down, such a wearing a mask, observing social distancing and handwashing. It is crystal clear that we can hold down the community prevalence of COVID-19 with these proven strategies.”

To prepare their report, Mathematica researchers interviewed more than 60 people, including state legislators, family members of those living in long term care facilities, and officials in the Lamont administration. They did not interview Renee Coleman-Mitchell, who served as the commissioner of the Department of Public Health for much of the pandemic until she was abruptly fired in May.

Nationwide, more than 40% of all COVID-19 deaths through July occurred in nursing homes compared to 74% in Connecticut’s long-term care facilities.

More than 3,000 nursing home residents who had COVID-19 have died in Connecticut so far. Deaths peaked in mid-April, with 50 people dying each day.

To prevent another resurgence in nursing homes, the report recommends the state continue regularly testing residents – an approach the state was slow to adopt. The state has committed to continue paying for testing through October. The report recommends the state actually expand its testing policies so that nursing homes with more COVID-19 cases are tested more frequently and so those who have tested positive in the past can be tested regularly going forward.

Staffing issues at the state’s nursing homes will need to be addressed to prevent rapid spread moving forward, Mathematica concluded. Some of the initial response by the industry was hampered by staffing shortages caused by the disease itself, the report observed. The researchers recommend that staff exposure to residents be limited by reducing the number of staff who are working at multiple nursing homes or in different wings of a facility.

“Facilities should consistently assign staff to work on the same unit and with the same residents,” the report recommended.

Accommodating such working conditions will likely be expensive, as many staff work in multiple locations to supplement the low wages they are paid.

Which nursing homes were hit the hardest?

Half of those who contracted COVID-19 lived in the same 26% of Connecticut’s nursing homes, the report said.

Researchers found several trends that may help Connecticut’s policy makers target their response if there is another surge. 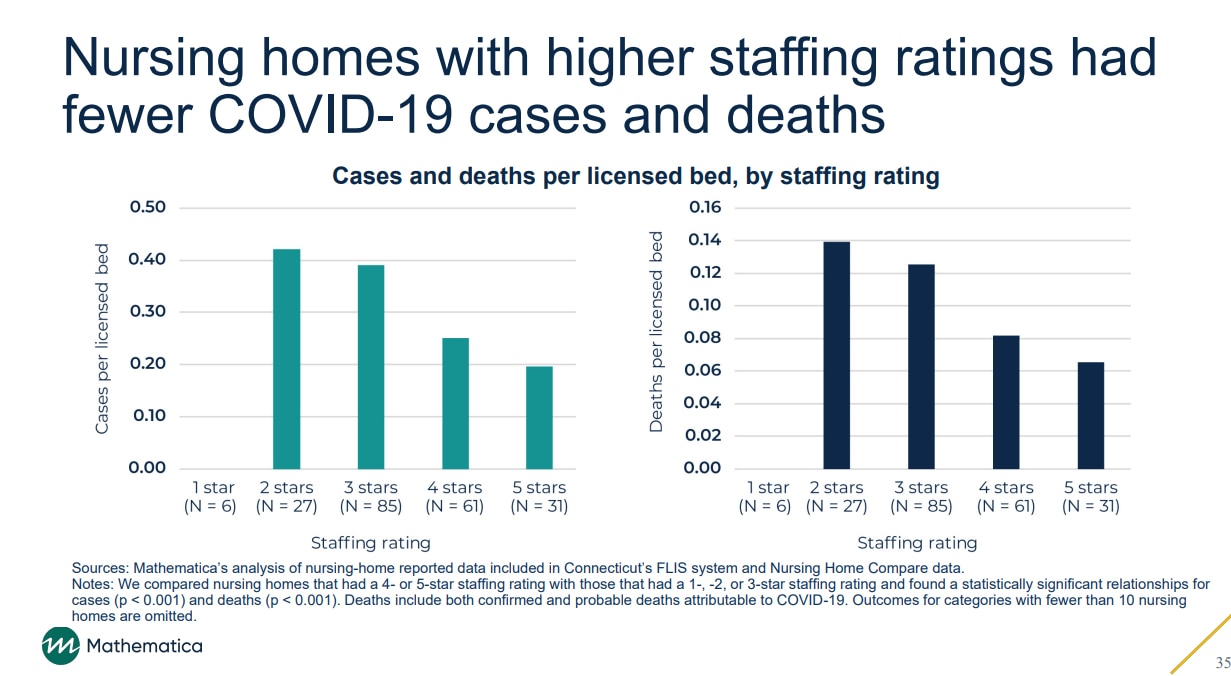