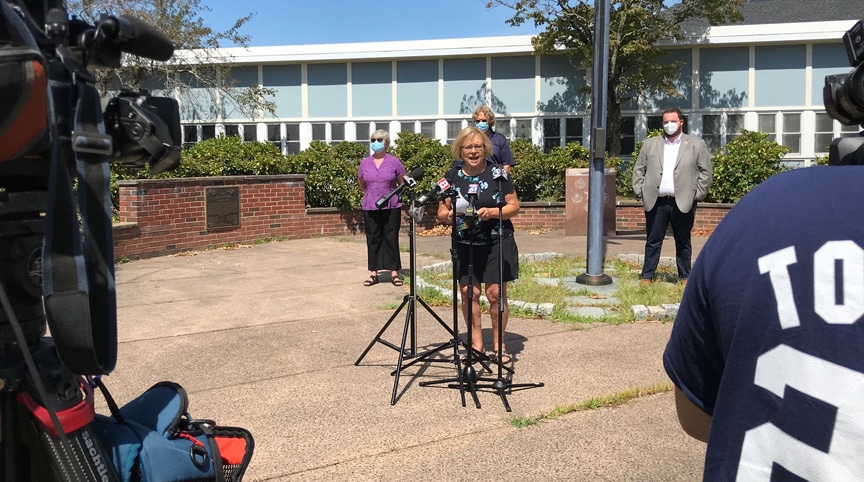 Mansfield Mayor Toni Moran explains why her town and adjoining Windham — homes of UConn and ECSU — want Gov. Ned Lamont to give them the authority to limit gatherings to no more than 25 people and to impose $250 fines on violators. Behind her, left to right, is State Rep. Susan Johnson, Windham Town Council Chairman Tom DeVivo and Mansfield Deputy Mayor Ben Shaiken.

During a week in which UConn officials grappled with a growing number of COVID-positive students and an on-campus party that violated school rules, local officials are expressing increasing concern about the virus spreading into surrounding communities.

The mayors, who were joined by state representatives from Mansfield and Windham, said they need the authority to prevent potential super-spreader events of partying students, particularly when alcohol is being served.

So far UConn has tested 5,423 residential students. Of that total, 17 students, or fewer than 1% have tested positive for COVID-19. Three commuter students and two faculty members have also tested positive.

Of the 17 on-campus cases, five were students who were already identified as having prior exposure to the virus and were in medical quarantine at the school. Three of the five students were connected with positive cases on the football team and the two remaining students were exposed before they arrived on campus, the university said.

Administrators responded swiftly after learning about an on-campus dorm party earlier in the week, evicting some of the students involved from their dorms and sending out a letter on Wednesday reminding students they must follow protocol and remember they are also part of the wider community.

“On an individual level, we must each commit to following recommended public health protocols to keep ourselves and our community safe by adhering to the UConn Promise. And we want to be clear: When we refer to community, we mean more than just our UConn campuses,” said the letter, which was signed by President Tom Katsouleas and Provost Carl Lejuez. “Each of our campuses is part of the larger communities of the towns and cities where we live, including but not limited to Farmington, Groton (Avery Point), Hartford, Stamford, Waterbury, and Storrs/Mansfield. Whether you are going to a campus building or you’re going to the grocery store after our quarantine period, the same rules apply.”

The letter was not enough to eradicate the concerns of local leaders, however.

While officials said they welcome the students and generally praised the conduct of the vast number of those who are already on campus, they continued to express concerns Friday about what will happen if large groups of students gather and spread the illness.

Mansfield Mayor Toni Moran observed that unlike larger college host towns, Mansfield’s population nearly doubles when UConn students arrive on campus from other states and countries. She and state Rep. Susan Johnson said they are worried that a super-spreader event could reverberate through the local population, threatening the safe operation of schools, businesses and area homeless shelters.

“We were very dismayed by hearing [Lamont’s] press conference yesterday in which he talked about treating all communities the same. Mansfield is not the same as Hartford or Stamford…” Moran said.

Mansfield had 45 COVID-19 cases until a recent spike brought the number to 60. Those are low numbers, Moran conceded, but the rate of increase was “very worrisome.” Surveys of around 500 local people indicated to the officials that their respective communities are “very concerned” about the risks the influx of students pose.

Moran and the other officials said they are still waiting for a response from the state Department of Economic and Community Development, which Moran said was apparently unaware that the governor had assigned it responsibility for studying the issue. The department has not yet taken a position on it, the mayor said.

The towns said the governor has authorized additional patrols of their communities by state police, but they want him to give them the authority to implement a local ordinance that would impose $250 fines for those attending oversized gatherings. So far there has been only one such event in addition to the on-campus party earlier this week

During his press conference Thursday, the governor addressed the request from local leaders, saying that the state has tried to “steer away from having a patchwork of different restrictions, gathering sites and such depending, you know town by town.”

“It gets complicated in terms of enforcement,” he said. “But if it’s not working, we’ll take a second look.”