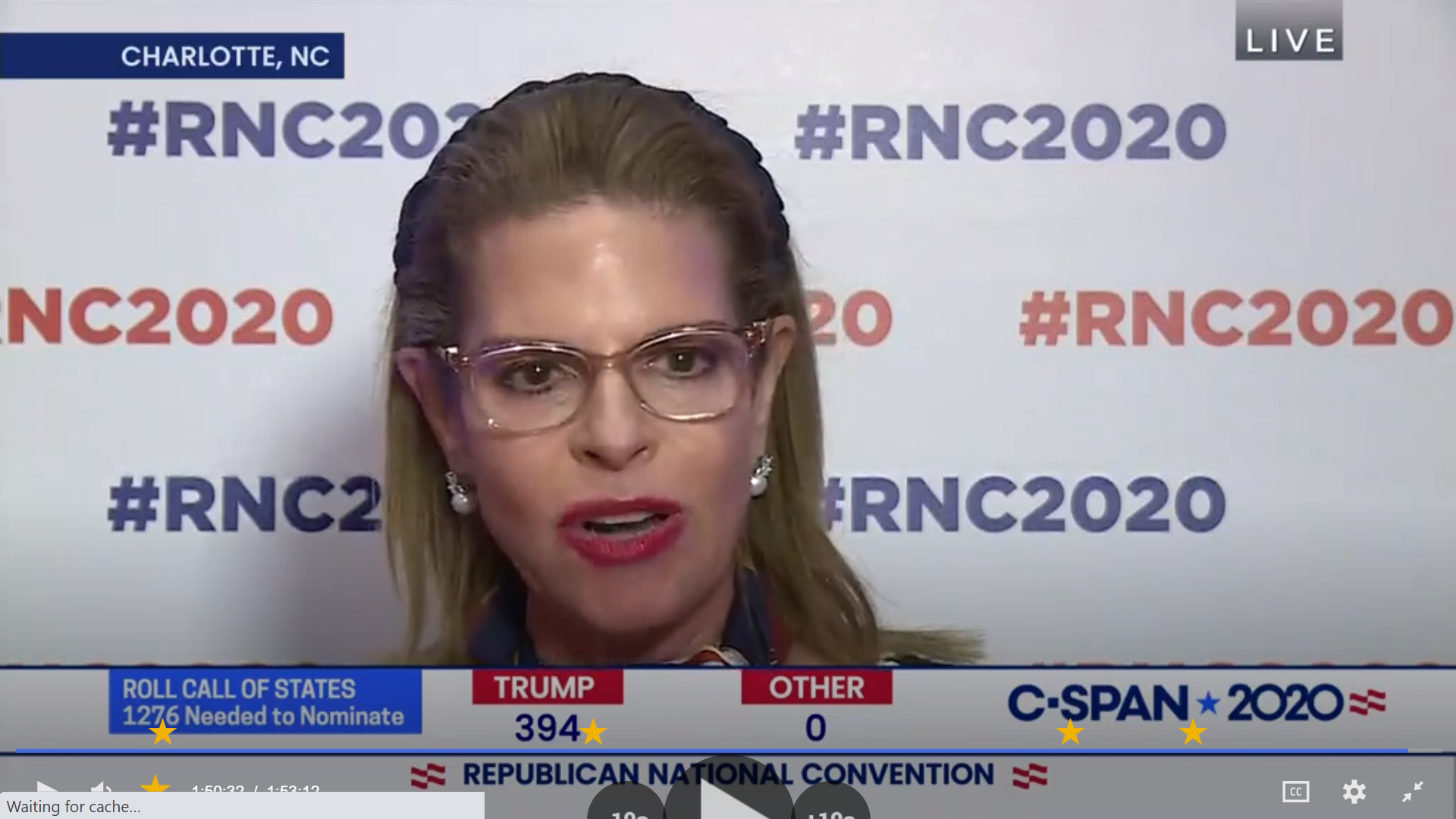 Leora Levy of Greenwich announced the votes of  Connecticut’s GOP delegates during the roll call.

Leora Levy, a businesswoman from Greenwich and a top fundraiser for the state GOP, on Monday announced all Connecticut delegates to the National Republican Convention cast their votes for President Donald Trump.

“Today as a proud and independent Nutmegger, I cast 28 ‘spicy’ votes for Donald J. Trump and American greatness,” Levy said.

She made her announcement at a pared-down Republican National Convention in Charlotte, N.C., where many of the usual trappings were on display – including bunting, plenty of American flags and signs from every state. But only a fraction of the Republican delegates are in attendance, chairs in the Charlotte Convention Center have been spaced out and masks are required, although some delegates failed to don them.

At the end of the roll call of the states,  largely a procedural exercise since Trump’s renomination is not in question, the president made a surprise appearance.

In response to calls for “four more years,” Trump quipped “if you really want to make them crazy, say ‘twelve more years.’”

He continued his bashing of mail-in voting, and said his administration “did a great job” battling the COVID-19 pandemic. Trump also said if he loses it’s only because the election is “rigged” through widespread mail-in balloting.

Supporters of mail-in voting, including some Republican governors, say it is needed to give people, especially the most vulnerable, a safe option to exercise their right to vote during the pandemic.

The president is scheduled to give his formal acceptance speech Thursday from the White House.

In announcing Connecticut Republican delegates’ unanimous support for Trump, Levy, who has been nominated by the president to serve as U.S. ambassador to Chile, gave a short history lesson.

She said Connecticut has been “proudly independent” since before the American Revolution, thanks to a charter issued in 1662 by King Charles II.

Levy said King James II later tried to revoke the charter, but Connecticut’s leaders, “through slight of hand,” hid it in the Charter Oak Tree in Hartford for two years until it could be safely retrieved and home rule reinstated.

Levy also touted Connecticut as “the Nutmeg State, the Constitution State, and arsenal of democracy,” as well as “home to the champion Huskies.” 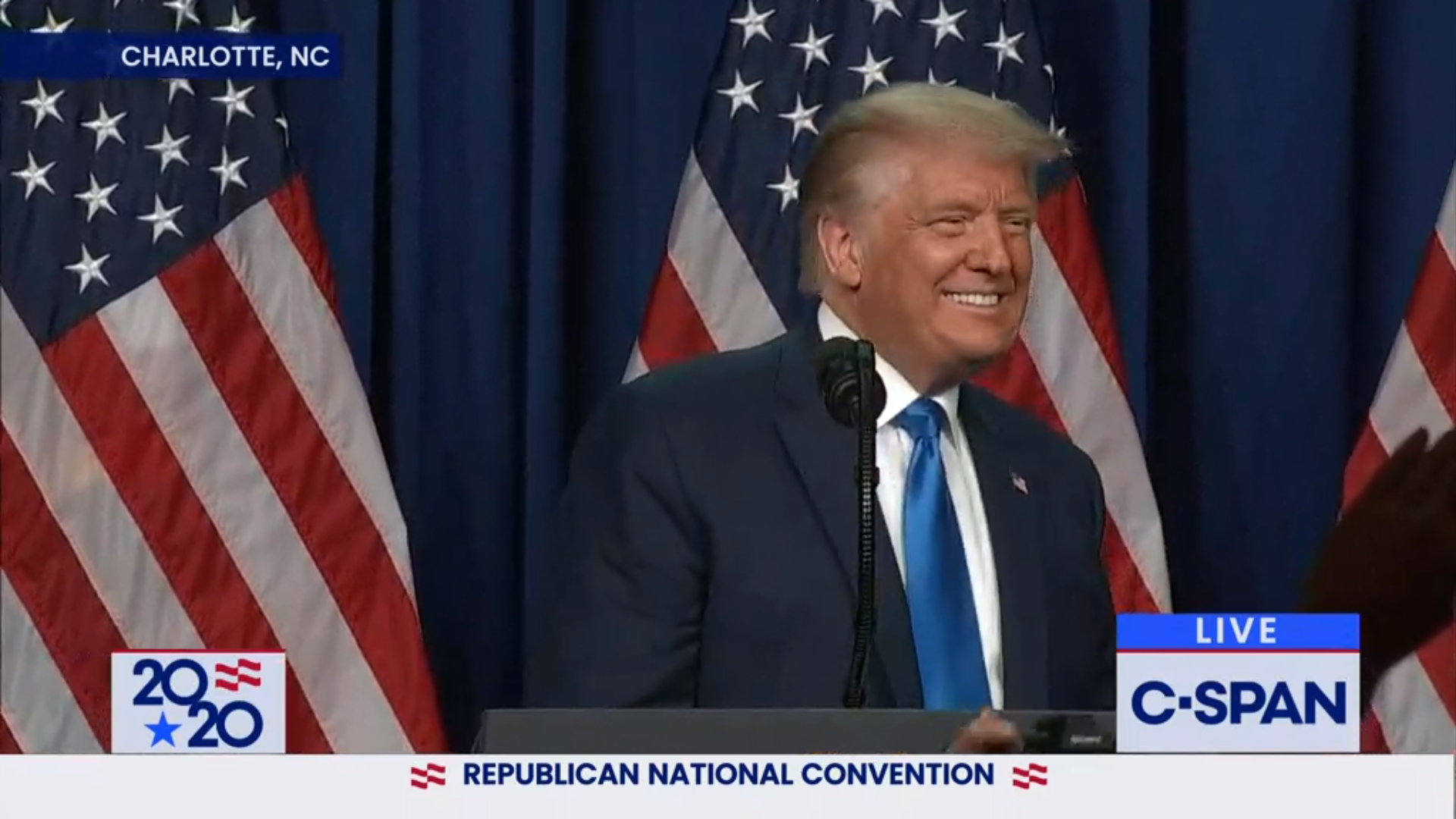 President Donald Trump made a surprise visit to the RNC in Charlotte, N.C., Monday. He focused largely on what he said was a “scam” perpetuated by Democrats to steal the election through mail-in voting.

As soon as Trump crossed the threshold of 1,276 delegate votes needed to win the nomination, Vice President Mike Pence, who had been renominated by acclamation, made brief remarks to the delegates.

“So men and women of the Republican National Convention: It’s on. Now is the time,” Pence said.

The convention is a crucial for Trump, who is trailing in national and battleground state polls. Messaging at the campaign will focus on Trump’s economic successes and his ability to nominate more GOP judges to the federal courts, including the U.S. Supreme Court.

Speakers at the convention will also try to portray Biden as a captive to the left flank of his party and soft on crime.

Also speaking Monday are former NFL star Herschel Walker and Mark and Patricia McCloskey, the St. Louis couple who were videotaped brandishing guns during a Black Lives Matter protest outside their home earlier this summer.