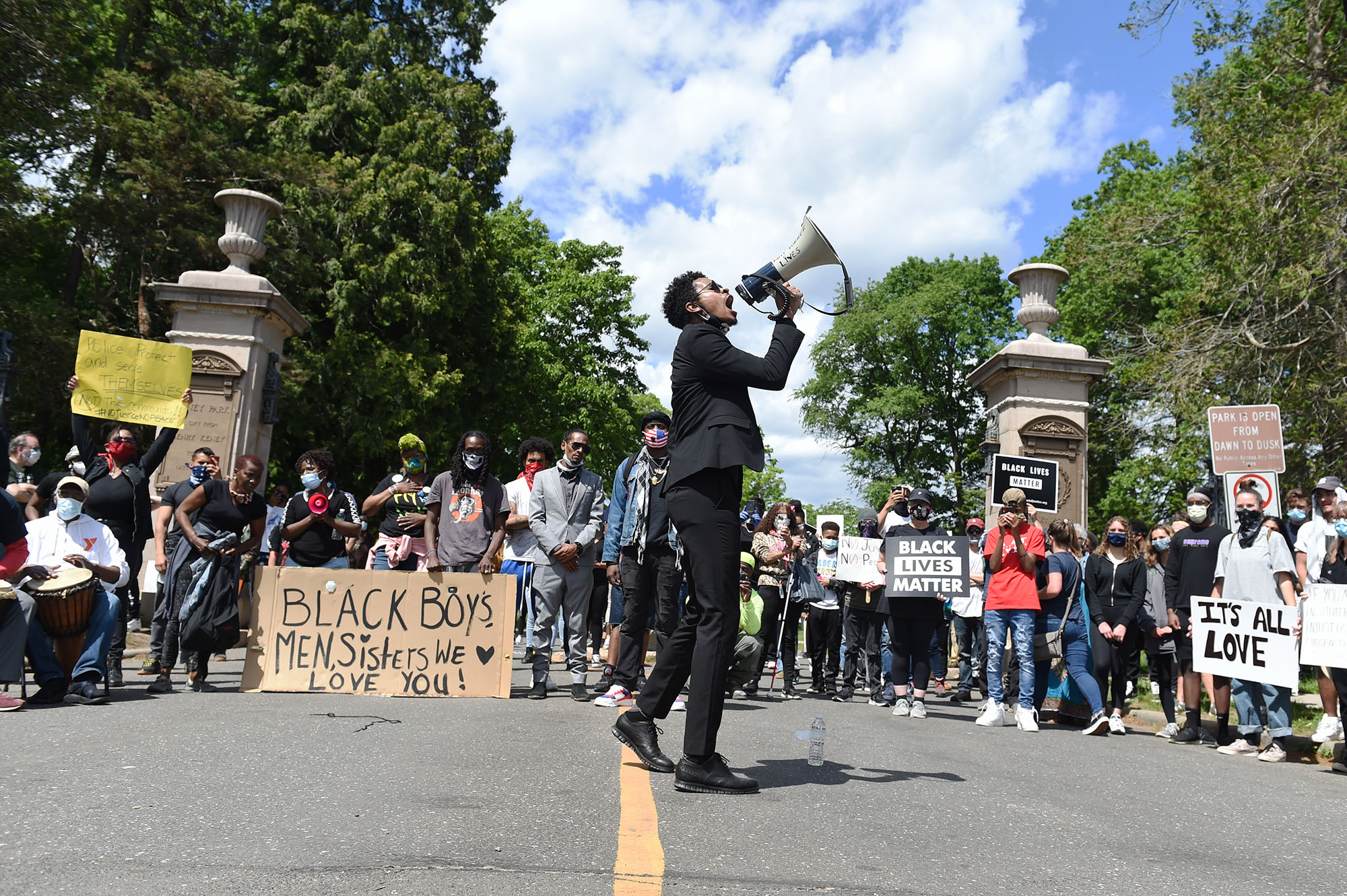 Mike Oretade, of Hartford, protests the death of George Floyd over the summer.

As a parent of two children with autism, terrifying thoughts race through Sarah Geragotelis’ mind when she’s driving with her kids in the car. What if she’s stopped by a police officer who doesn’t understand the reasons behind her children’s behavior?

“I’m often concerned that – I don’t know – my daughter rocks in the car, like what if I get pulled over, or they see my son having a bit of a fit and they take it the wrong way?” she asked.

Or, what if authorities come to their home?

“I almost think we should have some kind of like a checklist at our house so that if we do have a 911 emergency or situation, that people coming in would have a point list to look at, ‘This is what deescalates my child,'” she said.

Geragotelis spoke Thursday at one of the eight public hearings the Police Transparency and Accountability Task Force is in the process of holding to better inform their recommendations to lawmakers on how to make policing safer for all Connecticut residents.

Law enforcement’s interactions with people with disabilities has been a recurring theme of the listening sessions so far. About half of the testimony has dealt with fears over police contact with citizens with mental health conditions or who are on the autism spectrum.

“This has been a common complaint from community members way before the task force,” said co-chair Daryl McGraw. “People are not wearing a sign that says, ‘I have a physical or mental health disability.’ So you don’t know someone’s deaf, someone may be partially blind, until you engage them.”

Relations between police and people with autism have been raised in three of the four listening sessions. In the most recent hearing, Helen Taylor, of Waterbury, talked about how she worries about her 28-year-old son interacting with cops.

“Due to his autism, he would not be able to immediately comply with a demand from an officer, or even understand what the officer is asking, and this is true for so many of our individuals on the spectrum,” Taylor said. “This is a situation that could easily escalate as being noncompliant, but it’s just an innocent young man not understanding.”

Taylor is a certified trainer who helps police better understand autism and how to safely engage with people on the spectrum.

“One thing I say to them is that, whenever you approach a person on the spectrum and they behave a certain way, don’t take it personally,” she said. “I think that’s what happens: some officers take certain behaviors as personal, and as we are human, we react a certain way.”

Mental illness has come up too. In the first listening session, Colleen Lord, of West Haven, talked about her son Robby Talbot, whom Lord says was killed by corrections officers in New Haven Correctional Center in 2019. Talbot had had bipolar disorder. He’d been sprayed with a chemical agent several times after refusing to comply with officials’ demand he leave the shower. One lieutenant reportedly kicked Talbot in the torso after pepper spraying him.

“My beautiful son was left unconscious and dying, if not already dead, but it would be another hour and a half before staff on the next shift realized he was long deceased, in the exact same position officers on the prior shift had left him,” Lord said. “The police accountability act that the governor signed into law is a start, but please include correctional officers throughout the reforms.”

The task force has a subcommittee specifically focused on improving police interactions with the disability community. The frequent public testimony on psychiatric, developmental and intellectual disabilities, coupled with national and Connecticut news on fatal police shootings of people in those communities, underscores the importance of the task force’s work on this subject, McGraw said.

“I hope as a task force we can look at things from a broader perspective and get the community involved so we can help community members get the help they need, and possibly even avoid arrest, so they can be productive members of society, too.”

The task force will conduct four more sessions before the end of the month, held over Zoom at 10 a.m. and 6 p.m. on Sept. 17 and 24. Visit the task force’s website to sign up to speak at a session.