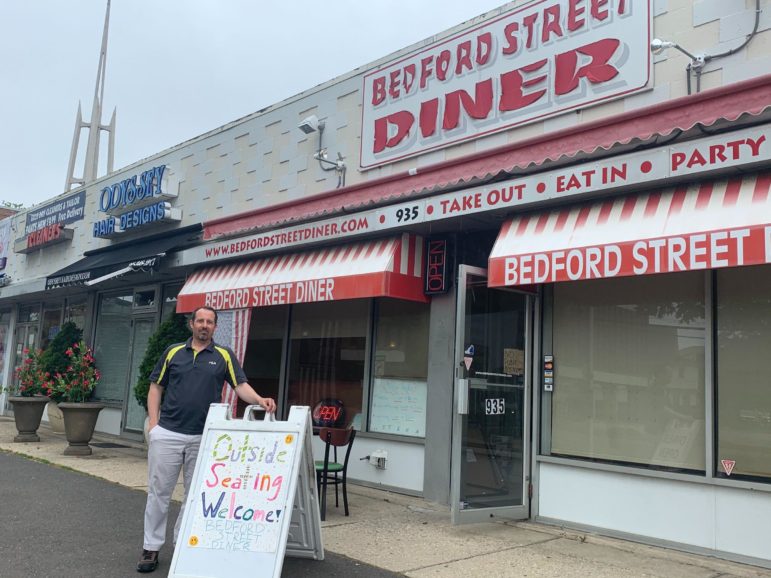 David Agostino, outside his family's Bedford Street Diner in Stamford.

Gov. Ned Lamont carefully walked through a COVID-19 briefing Thursday, first fretting over the statistical significance of a small-but-steady increase in infections, then expressing optimism over the number of children safely resuming classroom instruction.

The state reported 220 infections out of 13,857 new tests, a positive rate of 1.6%. It is a number that Lamont called “concerning,” more because of its steady upward drift than the significance of a one-day spike.

“That’s still one of the lowest in the country, but it is a trend,” Lamont said. He added later, “Let us track what seems to be going on.”

COVID hospitalizations increased by 5 to 75, a far cry from the 2,000 cases that threatened to overwhelm the state’s health care system. But Lamont noted, “We haven’t had 75 in the hospital since July.”

On the plus side, 39% of K-5 students are now getting full-time classroom instruction. With  600,000 students and staff back in school on at least a part-time basis, only 48 students and 27 staff have reported infections — and some of those cases were before schools opened.

The governor is trying to navigate a new phase of the pandemic, one where he seems to struggle to find clear signposts. He has not clearly articulated the standards for moving to an indefinitely delayed third phase in the loosening of restrictions.

Ninety-five percent of the state’s economy is open, and 85% has bounced back to where it was before COVID, Lamont said.

But the hospitality industry has cratered, and it is waiting for a sign from Lamont about what to expect in coming weeks and months.

Lamont met the previous day with the owners of restaurants and event venues, a segment of the economy still under significant restrictions. Unusually dry weather has been a boon for outdoor dining, but the industry is desperate for clear guidance on what comes next.

The governor met 10 business owners at the Barns at Wesleyan Hills, a wedding venue. They ate box lunches prepared by the Griswold Inn, then the venue operators outlined how they believe they can safely increase business.

“I’m excited you’re inside eating with us,” Scott Dolch, the executive director of the Connecticut Restaurant Association, told the governor. “You understand it’s safe.”

Restaurants can operate at 50% of capacity indoors, but it has been outdoor dining that has kept some places in business — and that will grow more difficult as temperatures fall. Dolch said his members have been frantic to find heaters.

One caterer told Lamont about refunding $800,000 in deposits, Dolch said.

The current rules on indoor events rule out all but the smallest events: Attendance is capped at 25 persons, including wait staff.

“Twenty-five is not going to work for this industry,” Dolch said.

New Jersey, which had been among the most restrictive states, now is allowing private events with as many as 150 guests, albeit in places that typically seat four times as many people, Dolch said.

Dolch said the event venues want to be allowed to operate at 50% of capacity, with a cap of 150 people.  The administration made one concession: walk-up bars can be open at private events, so long as social distancing rules are following.

The super-spreader wedding event in Maine came up. Dolch said that was an outlier; thousands of weddings receptions have been held safely, and his members can be entrusted to follow the state rules.

“It was a good meeting,” Dolch said. “I was optimistic as I walked out of there.”

His clients are getting calls about events for the fall and winter. They need answers from the governor.

Lamont said he will meet shortly with public health officials to review new rules for event venues and restaurants.

Earlier, the governor was heckled for the second consecutive day at a public event by a half-dozen people insisting it’s time to declare victory and give the emergency powers granted him by state law and affirmed this week by a judge.

One made his point with a Trump flag, another with a bullhorn. Lamont ignored both, other than noting with some satisfaction that each wore a mask, a precaution that Trump’s CDC director says is the best way to contain the coronavirus.

Lamont and a half-dozen other governors who have imposed some of the strictest COVID restrictions get the highest marks in 50-state polling about the handling of the pandemic. All seven are at 60% or above,.

A majority of Americans disapprove of the president’s response to the coronavirus.

But Lamont’s handling of the pandemic is now a partisan issue. He is not on the ballot, but Republican legislative leaders objected to the recent extension of the six-month emergency he declared in March and some GOP lawmakers are suing him, claiming an illegal overreach.

Rep. Mike France, R-Ledyard, a member of the Republican conservative caucus, is one of the plaintiffs in a suit filed this week. Two other caucus members, Reps. Doug Dubitsky of Pomfret and Craig Fishbein of Wallingford, are the lawyers who filed the case.

He was asked no questions about the litigation Thursday. But two reporters, including one who acted on behalf of her 5-year-old daughter, pressed him on another issue: Does the governor of Connecticut intended to use his emergency powers to restrict trick or treating?

“I anticipate we’re going to have a Halloween season,” Lamont said. “It’s a time of the year when people automatically wear masks. They also wear gloves. It seems like you are 90% of the way towards a safe way to do Halloween, just by definition.”