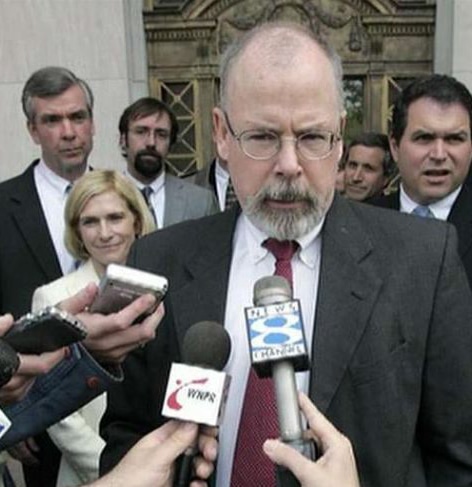 Connecticut U.S. Attorney John Durham in a 2006 photo.  Behind him at left is former prosecutor Nora Dannehy.

The lawmakers’ letter to Horowitz said Barr has indicated he would likely allow the Justice Department to take prosecutorial action and issue a preliminary report on Durham’s probe before the Nov. 3 elections.  “Such actions clearly appear intended to benefit President Trump politically,” the top Democrats wrote to Horowitz.

They also said their “concerns are even more pressing in light of the resignation of Assistant U.S. Attorney Nora Dannehy, who reportedly resigned due to political pressure from Attorney General Barr on the investigative team to produce a report before the election.”

“[Recent] actions suggest that the Durham investigation is being misused for partisan political purposes and undermine the legitimacy of any investigative steps Mr. Durham takes. In addition, it remains unclear what rules and authority permit the public release of a ‘report’ by U.S. Attorney Durham, raising additional concerns about the legitimacy of his appointment and work,” the senators wrote.

The U.S. Attorney’s office in Connecticut and the Justice Department did not have an immediate response to the requests that the DOJ’s top watchdog investigate Barr and Durham.

Durham was chosen by Barr last year to conduct the “investigation into the investigators” into Russian involvement in the 2016 election.  Trump has long characterized the federal investigation, which led to former special counsel Robert Mueller’s appointment, as a “witch hunt,” and has expressed disappointment that Durham has not released a report of his findings yet.

So far, Durham’s investigation has resulted in one indictment, that of former FBI lawyer Kevin Clinesmith, who pleaded guilty last month to falsifying an email used to support the surveillance of Trump’s former campaign aide Carter Page.

That hasn’t stopped the president’s supporters from insinuating there will be more indictments to come.