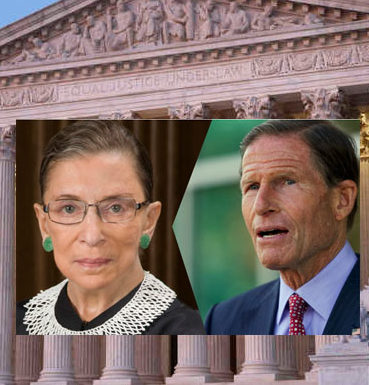 Washington – Connecticut Sen. Richard Blumenthal, who as a member of the Senate Judiciary Committee will play a high-profile role in the battle over the next Supreme Court nominee, promised Saturday to “fight like hell” to prevent the confirmation of a new  justice before the inauguration of the next president.

A key weapon, he said, will be reminding Americans of “what’s at stake” if President Donald Trump is able to tilt the high court  further to the right by naming a conservative replacement for Justice Ruth Bader Ginsburg, who died Friday.

The Supreme Court, for instance, is scheduled to hear arguments in a case challenging the constitutionality of the landmark  Affordable Care Act on Nov. 10, one week after Election Day.

“Ginsburg’s legacy is that she was a champion of rights and liberties that many people take for granted,” Blumenthal said, and “as matter or principle, I’m going to fight like hell” against a Trump nominee.

At least one key Republican senator agreed Saturday with Democrats that the vacancy should not be filled until next year.

“In fairness to the American people, who will either be re-electing the president or selecting a new one, the decision on a lifetime appointment to the Supreme Court should be made by the president who is elected on November 3rd,,” said Sen. Susan Collins, R-Maine, who is in very tough race to keep her seat.

To delay the nomination, three additional Senate Republicans must also want to wait. But on Saturday, many of Collins’s GOP colleagues agreed with Trump’s plan to move forward on the confirmation of a new justice.

Meanwhile,  Senate Minority Leader Chuck Schumer on Saturday gathered his foot soldiers. In a call to Democratic senators, he espoused the position adopted by Blumenthal, that “our  number one goal must be to communicate the stakes of this Supreme Court fight to the American people.”

He also said that if Majority Leader Mitch McConnell continues with his intent of holding hearings and a vote on a replacement to  Ginsburg, “nothing is off the table” if Democrats seize control of the White House and Senate in November’s elections

That is a reference to one thing a Democratic-controlled Senate could do to undermine a solidly conservative Supreme Court: expand the number of seats which, since 1869, has been set at nine. Democrats have also threatened McConnell to end the filibuster on Senate legislation if they gain the majority, making it much easier to pass their agenda.

On Saturday, Blumenthal joined other Judiciary Committee Democrats in a letter to McConnell that warned against pushing through a Supreme Court nominee weeks before Election Day.

The Judiciary Committee Democrats said “there cannot be one set of rules for a Republican president and one set for a Democratic president, and considering a nominee before the next inauguration would be wholly inappropriate.”

Senate Republicans blocked former President Barack Obama from nominating Merrick Garland to the Supreme Court nine months before a general election. Some of them cited the “Biden rule.”

As a senator, Joe Biden said in a 1992 floor speech —  that “once the political season is under way, and it is, action on a Supreme Court nomination must be put off until after the election campaign is over.”

Blumenthal said another weapon in the fight against a Trump nominee will be to remind voters of the stance adopted by McConnell and other GOP senators, including Lindsey Graham of South Carolina, when Garland’s nomination was put forward.

“For them to press forward now is the height of hypocrisy,” Blumenthal said

Trump is considering a short list of candidates – all conservatives who oppose abortion – and is expected to settle on a nominee soon.

“Time is necessary to evaluate a nominee,” Blumenthal said. He also said “my focus is stopping a vote before the election.”

Ginsburg’s death not only opens the door to a more conservative Supreme Court, it also alters the messaging and tenor of the presidential race and key Senate races as single-issue voters, especially those who oppose abortion, are energized by the battle over the high court.

Sen. Thom Tillis, R-N.C., who is in a tough race for re-election against Democrat Cal Cunningham, tweeted “there is a clear choice on the future of the Supreme Court between the well-qualified and conservative jurist President Trump will nominate and I will support, and the liberal activist Joe Biden will nominate and Cal Cunningham will support, who will legislate radical, left-wing policies from the bench.”

For Blumenthal, however, the race for the White House continues to be about what he views are Trump’s failures as president.

“The key issue in this election will be the president’s total, abject failure to deal with a pandemic that has killed people and driven the economy to depths we have never seen in recent history,” he said.