CT offers a cool digital tool. To pay your taxes. 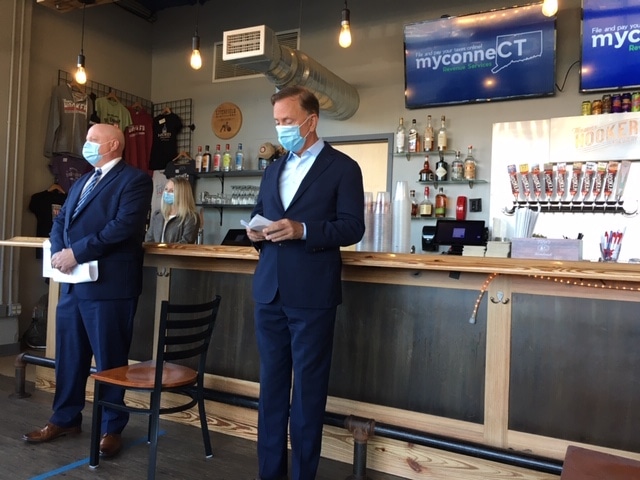 Acting tax commissioner John Biello, left, and Gov. Ned Lamont wait in the Hooker Brewery taproom to address reporters about myconneCT. Hooker was part of a focus group that tested the digital portal.

Gov. Ned Lamont was just a tad less enthused than some of his senior staff Monday in rolling out a new digital platform that will allow you to conduct certain business with the state anytime, anywhere and on any device.

But still, the myconneCT portal at the Department of Revenue Services is the latest in a series of planned technology upgrades aimed at rivaling private-sector services that allow customers to bank and shop online.

Lamont and his senior staff met reporters in the Hartford taproom of the Thomas Hooker Brewery, one of the businesses that participated in focus groups that gave the state feedback earlier this year in a test of the digital portal. The focus groups themselves were a departure for state government.

“One of the really key aspects of this modernization effort, which government has not always been great at, is listening to our customers, listening to residents who use our systems, listening to the small business owners and managers who have to interact with these systems,” said Josh Geballe, the state’s chief operating officer.

John Biello, the acting commissioner of revenue services, said myconneCT is now available for businesses to pay a variety of taxes — sales and use, employer withholding, admissions and room occupancy taxes,  among others.

“This is the start of the transformation to our digital era,” Biello said.

Eventually, the portal can be used to pay business and corporation taxes and taxes on personal income.

The planning for myconneCT began during the administration of Lamont’s predecessor, Gov. Dannel P. Malloy. The contract for the project was finalized in the early weeks of Lamont’s tenure.

The vendor for the system is Fast Enterprises, a global company that specializes in government I.T., with a focus on revenue services. Connecticut has paid the company about $12 million.

Geballe said the project is one of several that eventually will bring all of state government onto a common technology platform, one that is based on commercial applications that are regularly updated.

The early focus has been on three agencies responsible for large-volume transactions by businesses: the Department of Revenue Services, the Department of Labor and the secretary of the state’s office, which handles business registrations.

In July, Connecticut launched business.ct.gov, which the administration billed as “an online, one-stop-shop where entrepreneurs can easily find information and quickly create a checklist with everything required to start up or manage their business in Connecticut.”

Geballe said the overarching goal is to create a good first impression for anyone researching how to open a business in Connecticut.