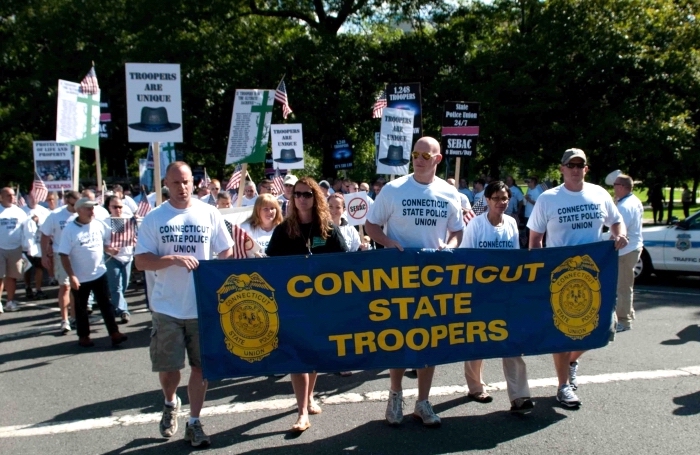 More than half of the state troopers surveyed in a recent audit earned more overtime than base pay, including some who more than doubled their regular salaries.

But there’s no easy way to reduce state police overtime pay when the number of troopers is down nearly 20% from a decade ago, when their ranks still fell nearly 200 positions short of a statutory minimum.

“The Department of Emergency Services and Public Protection should work with the executive and legislative branches to increase its staffing levels and ensure that it can meet scheduling requirements without incurring significant overtime costs,” Auditors John C. Geragosian and Robert Kane wrote in their latest report.

The department’s single-largest component is the Division of State Police.

Hefty overtime costs strain the state budget in the short term and inflate pension costs over the long haul, the auditors added.

The audit released Tuesday reviewed a sample of 80 troopers from barracks with major overtime expenses in the 2019 fiscal year and found 45 of those troopers, or 56%, made more in OT than in base pay. Some collected enough overtime to equal 244% of their salaries.

Geragosian and Kane also found more than 3,100 instances in which employees earned 15 hours of pay or more in one day.

And while final totals for the 2019-20 fiscal year, which concluded June 30, weren’t available Tuesday, the department was on pace for another round of hefty overtime spending.

The legislature’s nonpartisan Office of Fiscal Analysis estimated overtime expenses at $24.9 million — through the first nine months of the 2019-20 fiscal year.

“It is incredibly difficult to run the state police at less than 900 troopers and it creates incredible exposure in overtime spending,” department spokesman Brian Foley said.

The state police division currently has 856 troopers, though another 84 are scheduled to graduate from the training academy in October.

By comparison, Connecticut had 1,050 troopers in 2011 when the state police union began a three-year court battle with then-Gov. Dannel P. Malloy over staffing levels.

Malloy, who inherited a record-setting budget deficit when he took office nine years ago, laid off 56 troopers after the union rejected his call for wage and benefit concessions. But the struggle involved more than just pink slips.

Connecticut had a statute at the time mandating a minimum trooper contingent of 1,248 — a standard that governors and legislatures routinely waived in the years just prior to the Malloy administration.

Ultimately, Malloy would reverse the layoffs, legislators would repeal the minimum staffing quota, and the union would drop its lawsuit.

But Malloy, who faced a sluggish economy and frequent budget deficits, would continue to shrink employment through attrition, among the state police and other agencies, throughout his tenure.

Division officials continue to analyze staffing data to stem the rise in  overtime, but believe a contingent of at least 1,000 troopers would be needed to significantly mitigate the problem, Foley added.