Mystic Aquarium restructures for COVID — and beyond 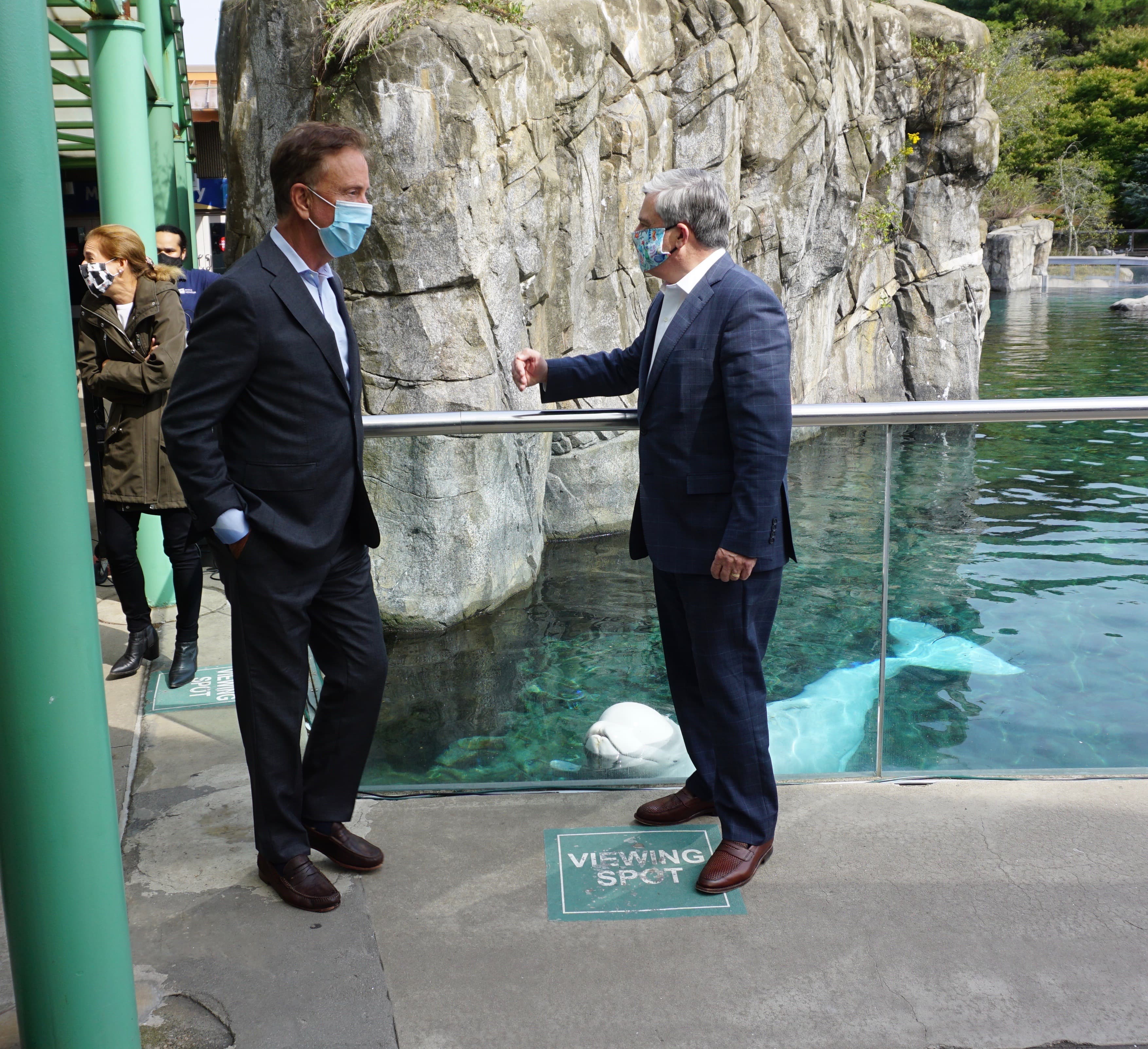 Mystic — A beluga whale glided to the edge of the platform overlooking its 750,000-gallon habitat and looked up, seemingly joining the Mystic Aquarium’s president, Stephen M. Coan, in greeting Gov. Ned Lamont and his economic advisor, David Lehman.

The governor and his entourage came Tuesday to celebrate a financial restructuring that will leave the aquarium with minimal debt, stabilizing the finances of Connecticut’s largest tourist attraction as it recovers from COVID-19 revenue losses.

A mix of federal COVID aid, private philanthropy, debt forgiveness, a state loan and the sale of unused property will allow the aquarium to eliminate $14.5 million in debt and save $1.5 million in annual carrying costs.

“This is more than just a restructuring. This, in my mind, is a complete overhaul of the balance sheet of Mystic Aquarium,” said Lehman, the commissioner of the Department of Economic and Community Development.

Lamont said the goal was to stabilize finances for a generation, not offer a temporary bailout. The Mystic Aquarium is central to Connecticut’s $18 billion tourism economy. About 60% of its 800,000 annual visitors are from out of state, and it also serves 100,000 students.

“This place is too important not to get it right,” Lamont said.

Mystic closed on March 17 and reopened in July. Under current COVID restrictions, it operates at 50% of capacity, with patrons admitted by timed tickets. About half the aquarium’s exhibits are outdoors, including habitats for beluga whales, seals and sea lions.

With fish and marine mammals to feed, expenses continued while revenue plummeted. In its most recent available annual report, the aquarium had operating expense of slightly more than $18.3 million in the year ending Dec. 31, 2018.

It earned $11.1 million on admissions, $2 million in memberships, $2.3 million in concessions and other auxiliary operations, and $1.5 million in classes. Other income included donations and operating grants.

“As COVID 19 hit, it became apparent that we need to restructure, that we were going to need help, and that it had to be something more than a bailout.” Coan said. “It had to be a fundamental  change in the way out structure worked.”

Coan called Lamont in April, seeking help. The governor recalled Coan asking, “What  do you think about ten million bucks?”

The call was the beginning of a three-month conversation with Lamont and Lehman, with Lehman insisting that the aquarium needed a budget that was sustainable. And that meant retiring millions in debt it had been carrying since the 1990s. Coan said Lehman pushed him to raise millions from private donors.

The aquarium responded with $6.5 million in new donations and sponsorships, plus $1 million from the sale of unused land. Led by Webster Bank, private lenders forgave $4.2 million in debt, according to a summary provided by the state.

The state eventually came close to giving Coan his ten million bucks: The DECD forgave $2.7 million owed on a $3 million loan made in 2013, and it pledged another $7 million in working capital in the form of a 20-year loan with favorable terms: 3% interest and all payments deferred for three years.

The $7 million in new DECD money comes with strings: $3.5 million is to be used to pay overdue bills, following a schedule to be approved by Lehman. The remaining $3.5 million will be paid monthly, as needed for cash-flow deficiencies, again at the discretion of the commissioner. The source of the loan to Mystic is a revolving fund for manufacturing assistance.

Mystic must maintain a workforce of at least 108 full-time employees.

Including $2.5 million in federal COVID funding, the restructuring package is worth about $31.5 million, officials said.

In return, Mystic is prohibited from incurring additional debt and it must give the state two seats on its board to be fill by Lehman’s appointees, one with an expertise in business and the other in tourism. The deal also sets performance metrics.

The aquarium also must provide 75,000 free passes with a value of $12 million and provide additional STEM programming for 12 at-risk school districts for five years.

The deal was finalized in late August. On Tuesday, it was summarized by Coan, Lamont and Lehman, who spoke to reporters by the habitat for three beluga whales. At least one repeatedly surfaced behind them.

They were joined at the habitat’s edge by Rodney Butler, the chairman of the Mashantucket Pequots; Lt. Gov. Susan Bysiewicz and two local lawmakers: Sen. Heather Somers, R-Groton, and Rep. Kate Rotella, D-Stonington. Mystic is a village that includes portions of Groton and Stonington on either side of the Mystic River.

Butler is a member of the aquarium’s board of trustees. His tribe, the owner of the Foxwoods Resort Casino, was the primary donor for the construction of the whale habitat in the late 1990s, when the casino had little regional competition.

Lamont and Lehman acknowledged Tuesday that other tourists attractions damaged by the COVID recession need help beyond the Paycheck Protection Program that provided $7 billion to state businesses. An expected second round of funding has not been forthcoming.

The state will try to help other institutions, he said.

“Connecticut is going to find a way to be a partner — not a partner in terms of a handout, but a way that we can come up with some strategies, where we share some of the operating expenses to help them keep going, help them keep people employed,” he said. 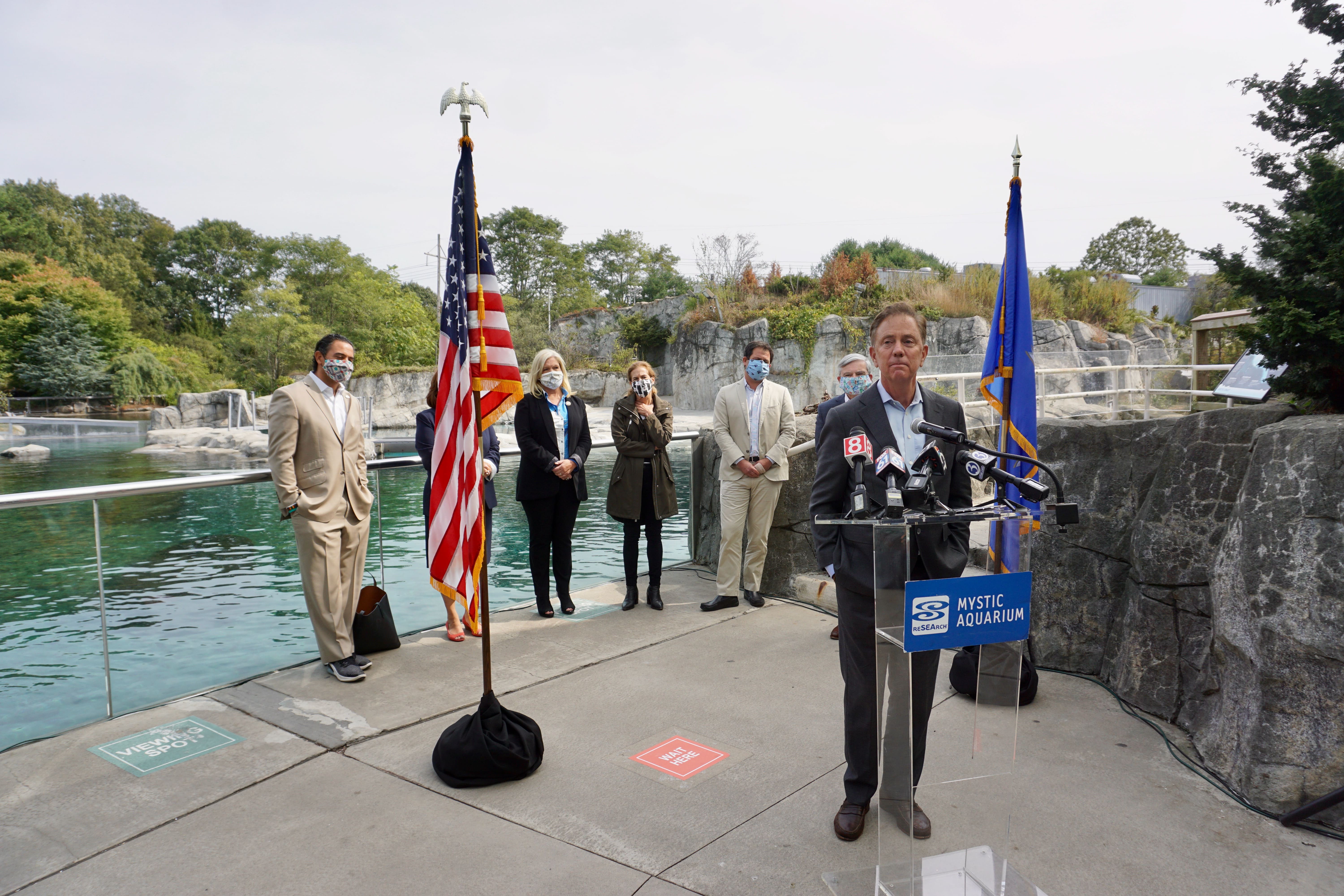 How, exactly, was unclear. Lamont said his administration would roll out additional details this week.

How to preserve theaters and other cultural institutions during the pandemic has been a national issue. A survey in July found that one-third of museum directors were fearful that their institutions would not survive.

Lehman said the state had no clear picture of how many non-profit institutions were struggling before COVID.

“It is very tough to generalize,” he said. The question before DECD, he said, is “what do the next two, three, four years look like in a post-COVID world?”

Any institution seeking help should consider the Mystic restructuring, he said. In the end, Lehman said, the state agency wanted assurance it was lending money to “a long-term viable business.”

Of the Mystic restructuring, he said, “It really checked all the boxes for us.”