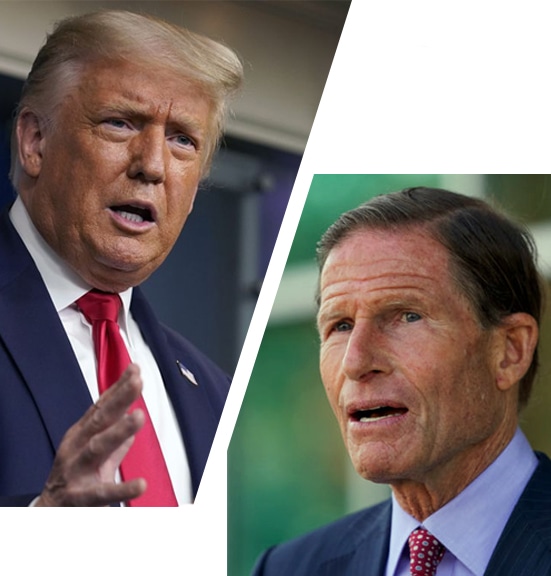 Washington – Dozens of Democratic senators have panned President Donald Trump’s decision to rush a confirmation of a Supreme Court nominee before the Nov. 3 election. But it was Richard Blumenthal’s opposition that seems to really have gotten under the president’s skin.

Revising an old slur against Blumenthal, Trump tweeted Sunday morning that Blumenthal should be impeached, and not be able to cast a vote for anything of substance, including, apparently, the confirmation of his Supreme Court pick, Judge Amy Coney Barrett.

“Hanoi Dick, who lied for years by saying he was a war hero in Vietnam, and was never even there (Impeach him!), should not be entitled to a vote on anything of importance!,” Trump tweeted.

(The Senate concluded in 1798 that senators cannot be impeached, but can be expelled by a two-thirds vote of the chamber.)

Trump has attacked Blumenthal  several times because more than a decade ago the senator said that he served in Vietnam. He served in the U.S. Marine Corps Reserve during the Vietnam era,  but did not deploy to Vietnam and has apologized for the misconception his comments created engendered.

And Trump responded in another tweet. “YES, for many years, and hundreds of times a year. He is a Senatorial JOKE!”

Blumenthal has been one of the most vigorous critics of the president’s choice of Barrett to replace the late Justice Ruth Bader Ginsburg and of Trump’s decision to rush a nominee to confirmation before the election. Sen. Chris Murphy, D-Conn., also opposes Barrett’s confirmation.

On Saturday, Blumenthal tweeted “ I will refuse to treat this process as legitimate & will not meet with Judge Amy Coney Barrett.”

As a member of the Senate Judiciary Committee, which will vet Barrett’s candidacy for the high court, Blumenthal would normally receive a private, “courtesy meeting” with the nominee before her confirmation hearing.

Interviewed Saturday morning on MSNBC, the senator had this response to Trump’s latest insult: “There he goes again, peddling the same lies. They’re not going to stop me from speaking out because there’s so much at stake, so much real harm to real people’s lives that will result from this nomination, ranging from children who have pre-existing conditions to women who simply want to decide how and whether to have families.

“So I’m going to continue advocating for the people of Connecticut who want health care and marriage equality, gun violence prevention, civil rights and liberties – all of the basic protections that are in peril by this right-wing nomination.”

The last time Trump brought up Blumenthal’s war record was during a summit in Hanoi in February of last year, where the president was to meet with North Korean leader Kim Jong Un.

“I have now spent more time in Vietnam than Da Nang Dick Blumenthal, the third rate Senator from Connecticut (how is Connecticut doing?)” Trump tweeted.  “His war stories of his heroism in Vietnam were a total fraud – he was never even there. We talked about it today with Vietnamese leaders!”