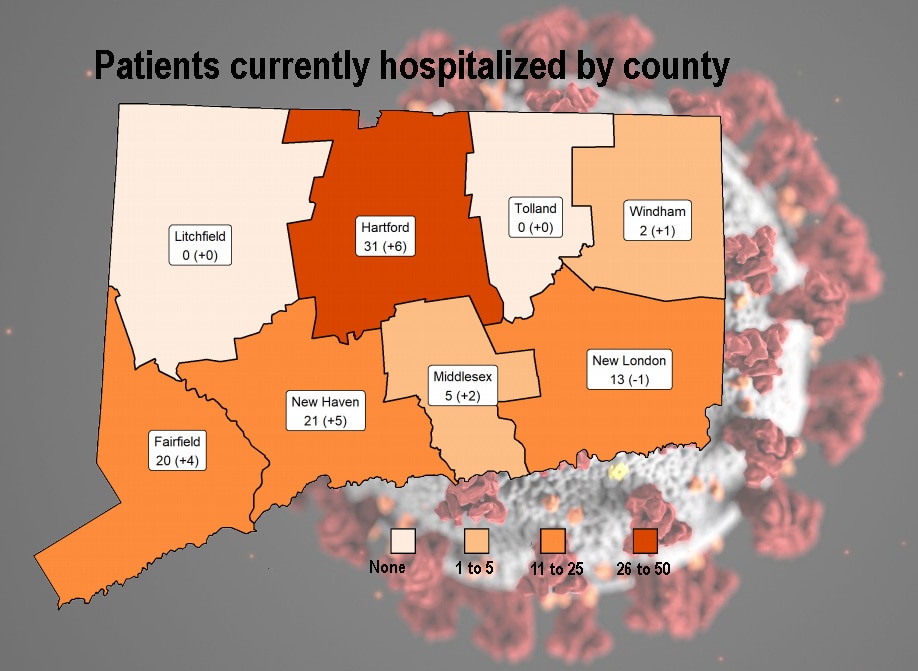 Nearly 2% of Connecticut’s coronavirus test results came back positive Tuesday, the highest, single-day infection rate since the state left the worst days of the pandemic behind in late June.

That number comes just nine days before Connecticut is set to enter its third phase of easing COVID-19 restrictions — one that will permit theaters and concert halls to reopen on a limited basis and increase the indoor capacity of restaurants and event venues.

But Connecticut’s average infection rate for the past week — a more important metric according to many public health officials — remains much lower at 1.1%, according to a key adviser to Gov. Ned Lamont.

Tuesday’s report also showed two new deaths from COVID-19, bringing total fatalities in Connecticut since the pandemic began to 4,505. Another 17 people were hospitalized with the coronavirus Tuesday, bringing the statewide total in this category to 92.

Josh Geballe, Lamont’s chief operating officer, also noted that the 1.8% infection rate recorded Tuesday was not accompanied by any new reports from state health officials or police of extreme COVID-19-related spread, such as social events in excess of legal limits on gatherings.

“It’s one day,” Geballe said, “but as Governor Lamont has said, we are watching all of the trend lines very carefully.”

“We have seen day to day fluctuations in our test positivity from time to time,” said acting Health Commissioner Deidre Gifford, “so we tend to watch overall trends.”

“With that said,” she continued, “we have seen small but persistent increases recently, along with higher numbers of cases overall. We have been anticipating this with the onset of Fall, but it is an indication that more indoor activities and more contacts means higher risk of spread of COVID.”

The higher-than-normal infection rate for Tuesday is also amidst a much smaller than normal number of test results. A general principle of statistics is that the smaller the sample size, the less reliable the results are.

Public and private labs completed 10,380 tests on Tuesday with 182 new coronavirus cases reported. But the state routinely has been performing about 100,000 tests per week — an average of about 14,000 per day — making Tuesday’s sample significantly smaller.

Tuesday’s higher infection rate, in the very short term, is not part of a trend. Daily infection rates averaged 1.1% in Connecticut over the weekend and Friday’s rate was 0.8%.

The University of Connecticut also reported a very modest infection rate Tuesday, 0.9%, among the roughly 5,000 resident students at its main campus in Storrs.

But taken in the context of the past six weeks, Tuesday’s statewide rate fits in with a general picture of increasing COVID-19 spread.

The state enjoyed weekly average infection rates below 1% for much of the summer as the worst of the outbreak — recorded in April and the first half of May — steadily retreated in the second half of May and June. Single-day infection rates rarely crept above 1.2%.

Still, administration officials became concerned following an outbreak of COVID-19 in August in Danbury, and smaller incidents of late summer coronavirus spread in a Norwich nursing home and at Central Connecticut State University in New Britain.

That, coupled with the return of students to many local school districts and the approach of flu season, elevated concerns about the potential for infection rates to increase this fall.

Who decides when vaccine studies are done?

Dr. Anthony Fauci will oversee most of the ongoing COVID-19 vaccine trials in the U.S., but not Pfizer's.