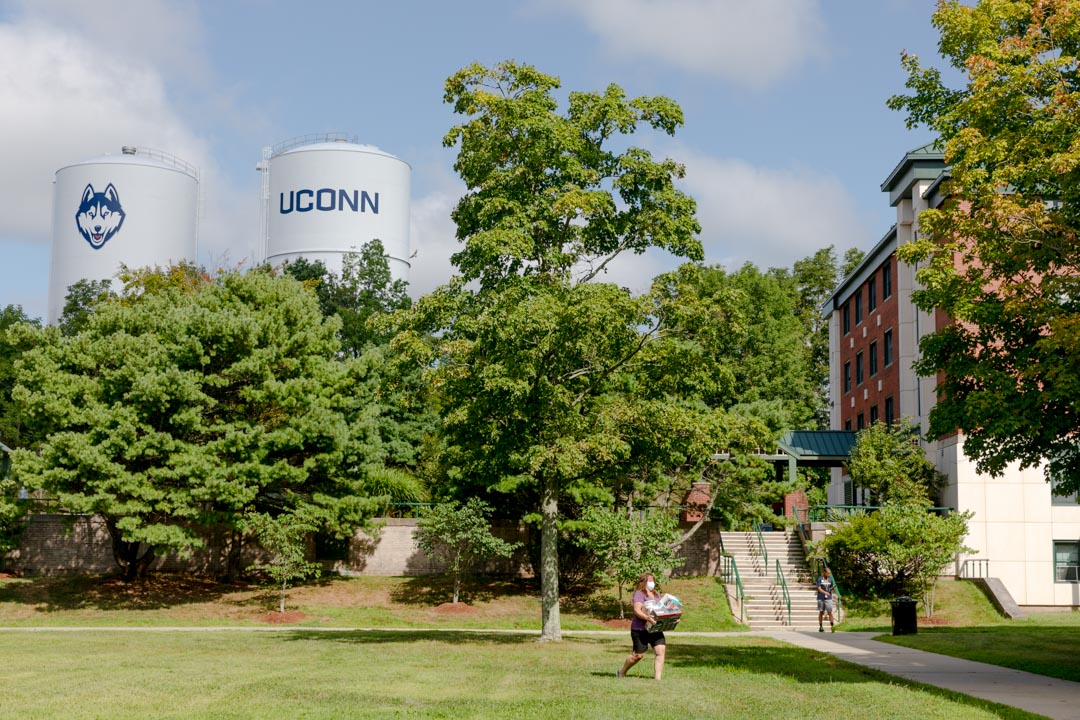 Denise Rickevicius, from Watertown, carries her daughter’s belongings as she moves into a UConn dormitory last month. The number of on-campus students has been sharply limited this year and has brought a loss of revenue.

Officials at the University of Connecticut and its health center on Wednesday asked the state for a $104.4 million bail out, and warned they may need significantly more if the coronavirus shuts down the campus and hospital again.

While the state’s flagship university waits on Gov. Ned Lamont and the General Assembly to decide whether the state has the money to help out, UConn has begun considering laying off some staff and raiding its budget reserves. Its health center has taken out a $45.3 million loan to cover this fiscal year’s expenses.

“The clock is ticking on the fiscal year,” UConn Budget Chief Scott Jordan told the school’s Board of Trustees during a meeting Wednesday about the fiscal year ending June 30.

UConn Health – which is made up of the hospital, medical and dental schools and research facilities – has been fiscally ill for years, but the pandemic has exacerbated that. The health center’s budget chief reports that what’s left after all the cuts the enterprise has made is a $76.9 million shortfall.

He said the health center received a $45.3 million loan from the Center for Medicare and Medicaid Services to get it through the fiscal year, but the university will need to start repaying that in March.

At UConn  – comprising its Storrs and regional campuses – Jordan said a much larger deficit was winnowed down by paying for some costs with borrowed funds, furloughing non-union managers, and not filling positions as they become vacant. Despite fears that fewer students would enroll, the school actually saw an 2% increase. However, this uptick was not enough to offset the massive losses in income from students not living and eating on campus. The university was not able to share the impact on faculty levels as a result of the hiring freeze.

But a shortfall of $28 million lingers, and so the school has directed its departments to prepare plans that involve laying off employees and tapping their reserves.

“We’ll be asking this time for departments to share with us plans that may include use of fund balances in those departments, actually reduction in payroll through layoffs or other mechanisms,” said Jordan. “It will be very important that we begin now because, as I said, we are going to be needing all help – federal, state, labor reduced expenditure – and potentially the university [rainy day reserves] to balance the budget.”

UConn has asked all their employee unions to open negotiations and began negotiations with its faculty union this month, the American Association of University Professors.

Stephanie Reitz, spokesman for UConn, said it remains to be seen whether the university will achieve givebacks.

“We approached our UConn-specific collective bargaining units with a request that the unions assist the university in addressing our fiscal challenges. Those conversations are ongoing,” she said.

UConn AAUP President Mary Ellen Junda said, “The next round of negotiations between UConn AAUP and the university has started this month in an effort to improve the working conditions for our faculty and our coaches. We are hopeful that these negotiations will continue the long-held tradition of being respectful of each other’s responsibilities, productive in moving forward to a new agreement and achieving as many improvements as possible.”

While Lamont joined the call minutes after UConn’s Financial Affairs Committee approved sending its bail out request to his budget office for consideration, there was no hard sell made to the state’s chief elected official during his brief appearance during the trustees’ meeting.

The governor attended to celebrate the naming of a building at the Avery campus after former Gov. Lowell Weicker.

“I owe you guys an incredible debt of gratitude just how complicated this all is economically for the state and for UConn,” he said. “Thank God, we’ve got our $3 billion rainy day funds, we’re in a much better position than any of our neighboring states, but we’ll have some more clarity in the next, you know, 60 to 90 days I think.”

UConn Board of Trustees Chair Dan Toscano praised Lamont while softly pitching the need for help.

“There’s another conversation about opportunities that lie ahead for UConn and I think your commitment to UConn being one of the greatest flagships in the country does not go unnoticed by this group and I know we’re going to have some difficult days ahead, financially, but I think we’ll be better off knowing that we have your whole support, and the support of your administration.”