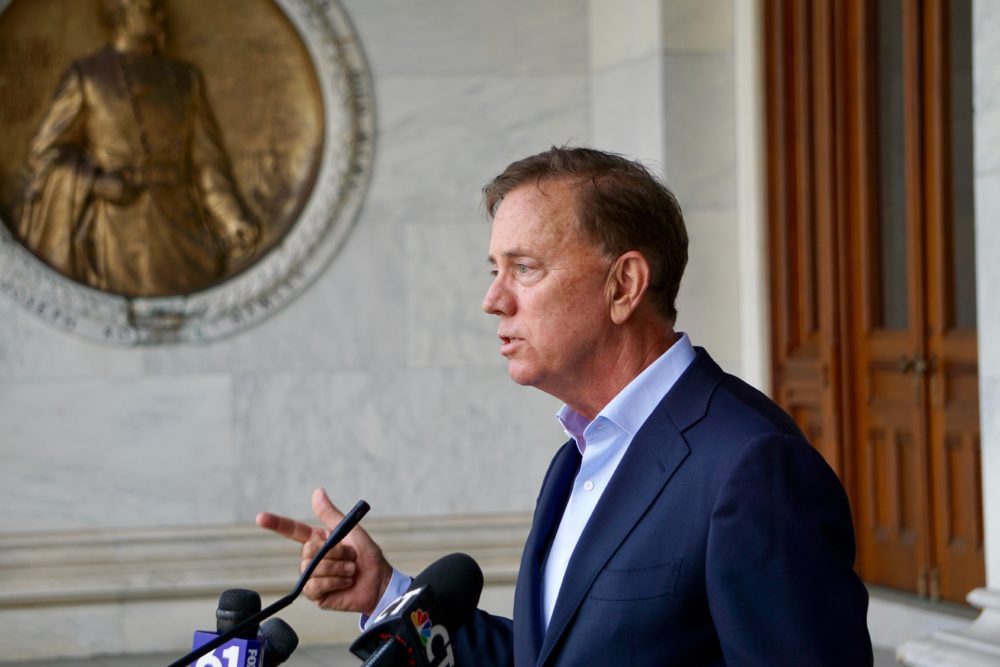 Gov. Ned Lamont recommended Thursday that Connecticut tap 60% of its record-setting, $3 billion budget reserve to solve the bulk of the $2 billion deficit it faces — a problem due largely to the coronavirus pandemic.

And while Congress has been slow to adopt a third wave of economic assistance, the Lamont administration estimates existing federal relief will cover $100 million of Connecticut’s problems this fiscal year.

The rest of the shortfall would be covered by canceling previously approved tax relief for businesses, restricting hiring, and ordering a series of small cuts across most state agencies.

“The size and scope of the budget shortfall we are anticipating this year due to the COVID-19 pandemic leaves us few options,” said Office of Policy and Management Secretary Melissa McCaw, Lamont’s budget director. “Fortunately, we were able to save more than $3 billion over the last few years that allows us to avoid the drastic actions some states across the country have needed to take such as short-term borrowing or tax increases.”

The reserve actually exceeded 15%  by $61 million when the last fiscal year ended on June 30. Lamont and state Treasurer Shawn Wooden announced Thursday that the $61 million excess would be transferred into the pension fund for retired state employees.

How much will the state need?

But Thursday the administration recommended drawing $1.83 billion from the reserve to balance the books — if necessary over the remaining nine months of the current fiscal year.

It remains uncertain, though, whether Connecticut will need to draw the full amount.

Administration officials have acknowledged that the stock market has recovered much of the value it lost immediately after the pandemic began in March.

While the current deficit projection of $2 billion is huge — representing more than 10% of General Fund spending — administration officials were anticipating a much larger gap for the 2020-21 fiscal year, about $2.7 billion, just a few months ago.

“The governor’s administration is failing in its responsibility and using a dangerous ‘wait-and-see’ strategy to avoid a difficult conversation,” Fasano said. “The law is clear that when faced with the current budget problems, the governor must present a true deficit mitigation plan ‘to modify such allotments to the extent necessary to prevent a deficit.’ What the governor’s administration put forward today does not meet that requirement. It is incomplete.”

Connecticut officials believe the state can obtain another $100 million in additional federal aid from existing pandemic relief programs, and Lamont has said he remains hopeful that Congress will enact a third wave of assistance either later this year or early in 2021. Negotiations  between U.S. House Democrats and the White House over the next stimulus package have been taking place this week.

But McCaw noted Connecticut’s economy remains fragile. The hospitality sector, particularly restaurants, was hit hard, and could be left in worse shape if the pandemic worsens as flu season and the winter approaches.

The question is, will the positive trend continue?” McCaw said. “We have to be a little more measured and prudent.”

Given that risk, she added, the deficit numbers are daunting enough that state officials must at least prepare some measures to mitigate the gap further.

The governor’s plan calls for legislators to cancel almost $30 million in  previously approved tax relief for businesses that hasn’t yet taken effect, including the planned removal of a 10% surcharge on the corporation tax.

The head of the state’s chief business lobby said withholding tax relief when at a time when many Connecticut companies are hurting badly would be an economic mistake.

“We need to make sure looked under every rock and stone — and I will even say, pebble — to make sure we’ve done everything to reduce spending before we raise taxes,” said Chris DiPentima, president and CEO of the Connecticut Business and Industry Association. “Our businesses are really struggling right now and we need to do everything we can to keep them propped up.” 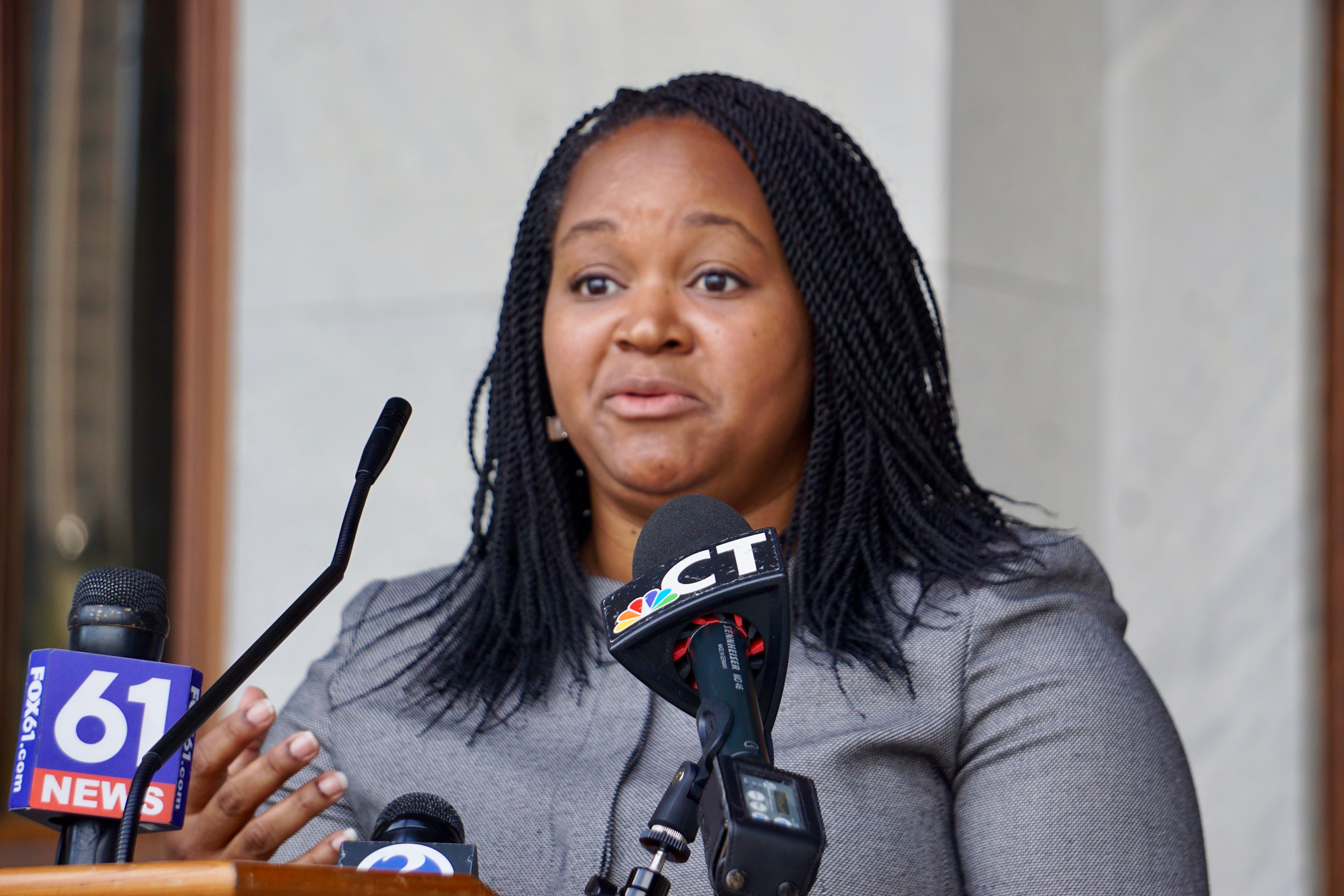 But McCaw said neither these proposed reductions, nor the revenue changes, would need legislative action before the regular 2021 General Assembly session convenes on Jan. 6.

The governor must submit a mitigation plan whenever the deficit exceeds 1% of the General Fund, but legislators have no deadline to act upon it.

Legislators should have much more information about the state’s economy and revenue trends by mid-January. State fiscal analysts must revise revenue estimates twice before legislators are likely to act — on Nov. 10 and on Jan. 15.

State law does give Lamont considerable discretion to reduce spending unilaterally in modest amounts across many agencies — but the governor’s plan doesn’t rely heavily on this option.

A popular target for rescissions under Lamont’s predecessor, Gov. Dannel P. Malloy, Connecticut’s public colleges and universities were not subjected to reductions at this time. Higher education units already have sustained major losses, having to approve big refunds to students when college campuses were closed due to COVID-19 last spring.

The transportation fund has been struggling to remain solvent for the past three years, and Lamont tried but failed to convince lawmakers in 2019 and 2020 to impose electronic tolls on state highways.

The transportation fund is projected to finish this fiscal year next June about $66 million in deficit. “If left unaddressed, the fund balance could be exhausted during the next biennium, undermining the state of repair of our state’s roadways and rendering it impossible to engage in any improvements that will help make the state more efficient and economically competitive,” McCaw said.

The state’s tourism fund, which is fueled largely with a tax on hotel visits, faced a 31% shortfall.