As Trump touts his ‘great’ COVID drugs, the pharma cash flows to Biden, not him 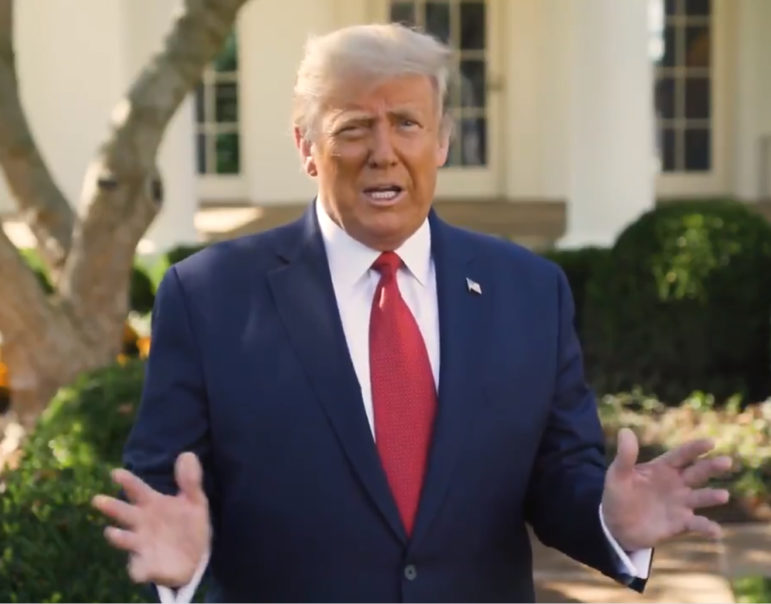 Pharmaceutical giants Regeneron and Gilead Sciences got the kind of publicity money can’t buy this week after President Donald Trump took their experimental drugs for his coronavirus infection, left the hospital and pronounced himself fully recovered.

“It was, like, unbelievable. I felt good immediately,” Trump said Wednesday in a tweeted video. “I call that a cure.”

He praised Regeneron’s monoclonal antibody cocktail, which mimics elements of the immune system, and mentioned a similar drug under investigation by Eli Lilly and Co. The president also took Gilead’s remdesivir, an antiviral that has shortened recovery times for COVID-19 patients in early research.

There is no scientific evidence that any of these drugs contributed to the president’s recovery, since many patients do fine without them. It is also not known whether the president has been “cured,” since the White House has released few specifics about the course of his illness.

A MESSAGE FROM THE PRESIDENT! pic.twitter.com/uhLIcknAjT

Yet as his campaign for reelection enters its final stretch, Trump is not feeling the love in campaign contributions. Regeneron, Gilead, Lilly and the industry as a whole are sending more money elsewhere.

Reversing a trend in which contributions from drugmakers’ political committees and their employees have gone largely to Republican candidates for president and Congress, so far for 2020 the industry has tilted toward Democrats.

In a year when complaints about high prescription drug prices have been overshadowed by the pandemic, donors with ties to pharma manufacturers have given around $976,000 to Biden, according to data from the Center for Responsive Politics. That’s nearly three times the pharma contributions to Trump, who recently switched his tune from complaining about “rip-off” prescription prices to describing drug firms as “great companies.”

Of $177,000 given so far to 2020 federal candidates by Regeneron’s employees and political action committee, four-fifths have gone to Democrats, including $35,203 to Biden, according to CRP.

Regeneron CEO Leonard Schleifer, a billionaire who has known Trump for years and belongs to the Trump National Golf Club Westchester in New York’s Westchester County, has a long history of giving to Democrats. He gave $5,400 to Hillary Clinton’s 2016 presidential run and $120,000 in 2018 to a political action committee attempting to flip the Senate to Democratic control.

Schleifer has made no registered political donations since last year, when his contributions went mainly to his son, Adam Schleifer, a Democrat running for Congress who lost in a primary this summer.

North Carolina Sen. Thom Tillis, representing a state with a large biotech industry and running for reelection in a tight race, has been the biggest Republican recipient of Regeneron dollars for 2020 races, tallying $5,526 so far.

“This is a company that looks as though they’ve always been committed to Democrats,” said Billet, a former AT&T lobbyist who teaches PAC management. “And my guess is they just have a Democratic culture in this company.”

A spokesperson for Regeneron, which has applied for emergency use authorization to bypass the Food and Drug Administration approval process for its drug, declined to comment on campaign donations and said the company will continue clinical trials.

The drug is expected to cost thousands of dollars per dose. “You’re going to get them for free,” Trump said of the COVID-19 drugs he took. The government has agreed to make initial doses of Regeneron’s antibody treatment “available to the American people at no cost,” the company says.

But details of the contract, including the price, remained secret. In any event, if patients get the drug at no direct cost, “it doesn’t mean they’re not paying for it,” said James Love, director of Knowledge Ecology International, a nonprofit that works to expand access to medical technology. “They’re just paying for it through taxes.”

The government is giving Regeneron $450 million to make and supply the antibody cocktail.

Donors with Gilead ties also lean left, giving two-thirds of their roughly $284,000 in contributions so far this cycle to Democratic candidates for Congress and president, the CRP data shows, including about $36,000 to Biden.

At Lilly, where Health and Human Services Secretary Alex Azar once ran the U.S. division, 54% of the money has gone to Democrats and 46% to Republicans. Lilly employees have given $45,000 to Biden and $13,000 to Trump, according to CRP.

Biden does not accept donations from corporate PACs; all his Regeneron, Lilly and Gilead dollars came from their employees.

Much of this year’s overall pharma shift to Democrats comes in the presidential race. KHN’s Pharma Cash to Congress data tracking sitting members still shows a preference this cycle of pharma PACs targeting congressional Republicans, $6 million so far compared with $4.7 million given to Democrats.

“Joe Biden has Big Pharma — as well as Big Tech and big banks — in his pocket because he’s worked for them for nearly 50 years, rather than the American people,” said Samantha Zager, a spokesperson for the Trump campaign.

Before Trump took office, he said pharma companies were “getting away with murder” over the prices they charge. Despite the president’s claims and promises, he has done little to lower prescription drug prices, according to experts and fact-checkers.

A Trump executive order this month would require Medicare to pay no more for drugs than other developed nations, but it starts with a test program and could take months or years to implement.

Pharma companies were among the biggest beneficiaries of Trump’s 2017 tax cut, saving billions by being able to bring home untaxed foreign cash and billions more in lower rates.

This story was first published Oct. 9, 2020, in Kaiser Health News.