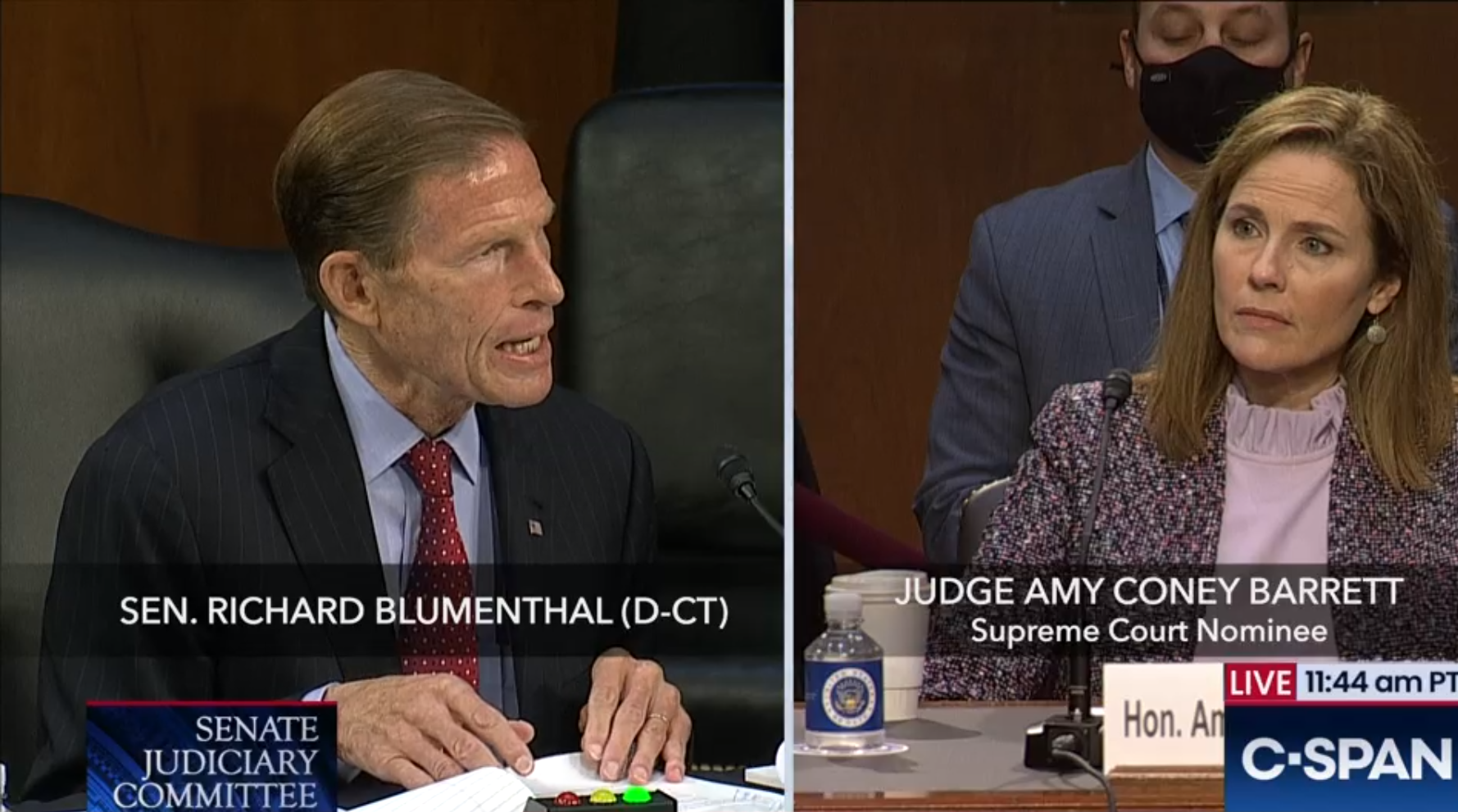 Washington — Sen. Richard Blumenthal, whose questioning of Judge Amy Coney Barrett was cut off for nearly an hour when microphones went dead in the Senate Judiciary Committee room, pressed the nominee Wednesday on a landmark Connecticut case regarding access to birth control and on gay marriage and climate change.

The Supreme Court’s decision in that 1965 case, Griswold v. Connecticut, ruled unconstitutional a state law that prohibited any person from using “any drug, medicinal article or instrument for the purpose of preventing conception.”

“I would like you to keep in mind how many people are listening and watching because they may take a message from what you say and they may see what you say and decline from using contraceptives or may feel they could be banned,” Blumenthal told Barrett, who, if confirmed, would take the late Justice Ruth Bader Ginsburg’s seat on the Supreme Court.

As she did repeatedly through three days of Democratic questioning on a series of landmark cases,  Barrett declined to give her opinion on the Griswold case.

“Well, Senator Blumenthal, the position I have taken is whether a question is easy or hard, that I can’t take a position on it, but I would be surprised if people thought that birth control would be criminalized,” the judge said.

But Barrett made an exception on two cases, Brown v. Board of Education, that ruled state laws establishing racial segregation in schools were unconstitutional and Loving v. Virginia, a decision that said state laws banning interracial marriages were unconstitutional. Barrett said she could say those cases were correctly decided because she had previously written in support of those decisions.

“Again, I’ve said throughout the hearing, I can’t grade precedent,” Barrett said. “I can’t give a yes or a no, and my declining to give an answer doesn’t suggest disagreement or an agreement.”

A frustrated Blumenthal said other Supreme Court candidates, including Justices Clarence Thomas and John Roberts,  weighed in on Griswold and other cases during their confirmation hearings.  “Others have answered the same questions and I’m disappointed that you won’t,” he said.

When Blumenthal asked her if she believed in climate change, Barrett said her views are not relevant to the work she would do if confirmed to the Supreme Court.

“I do not think my views on global warming or climate change are relevant to the job I would do as a judge, nor do I feel like I have views that are informed enough, and I haven’t studied scientific data,” Barrett said.

Blumenthal pressed on, asking Barrett if she believes humans cause global warming.

“I do not think I am competent to opine on what causes global warming or not,” said Barrett, whose father worked as a lawyer for Shell.

A climate change case is already on the Supreme Court’s docket. It  involves several oil companies, including Shell. The companies are being sued by the city of Baltimore, which is seeking to hold them financially responsible for their greenhouse gas contributions.

The microphones in the cavernous Senate Judiciary Committee hearing room cut out as Blumenthal began his questioning. The problem was fixed nearly an hour later – at least temporarily – and the hearing resumed.

Senate Judiciary Committee chairman Lindsey Graham called the next senator scheduled to question Barrett, Thom Tillis, R-N.C., indicating Blumenthal’s time had expired while the microphones were being fixed. “Your time is up,” Graham joked.

Blumenthal was given his full time to question Barrett. But the microphones faltered again during at the end of his questioning.

“Are we not paying the bills?” a frustrated Graham asked.

His committee will hear testimony from outside witnesses on Thursday. Then Graham will press for a committee vote on Barrett.

Democrats, however, are using their power under the committee rules to delay the vote for one week, so the vote should occur on Oct. 22.