Lamont says a coming COVID surge can be mitigated 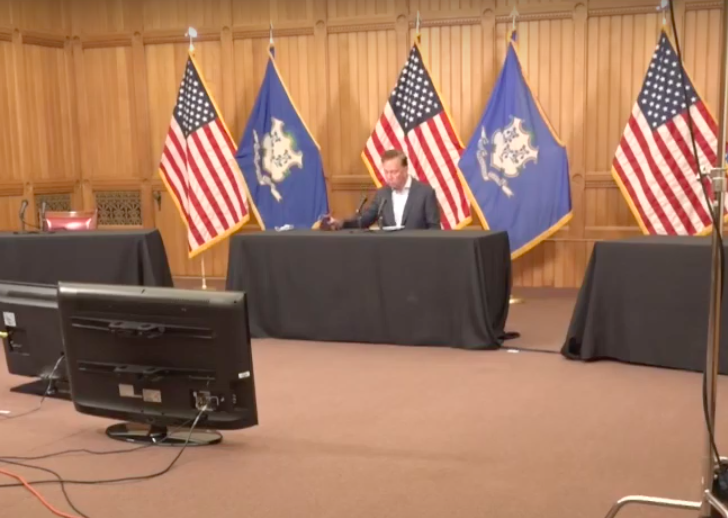 Gov. Ned Lamont waits for his virtual press briefing on COVID to begin.

Gov. Ned Lamont warned Monday that a coming wave in COVID-19 cases is inevitable, while insisting that Connecticut’s continued adherence to mask wearing, hand-washing and social distancing can mitigate the impact and save lives.

The governor criticized the White House chief of staff, Mark Meadows, for saying Sunday the administration cannot control the spread of the coronavirus, but instead was working on therapies and vaccines to “defeat it.” Meadows later clarified mitigation also was a goal.

“I don’t like the tone from the chief of staff, that he thinks we can’t do much about this, and let’s wait for a silver bullet,” Lamont said.

A flurry of 92,191 tests since Friday found 2,047 new infections in Connecticut, a positivity rate of 2.2%. The state recorded a dozen more COVID-related deaths, bringing the toll to 4,589. Hospitalizations increased by 37 to 270, a bump Lamont called “concerning.”

But the per-capital hospitalization rate in Connecticut was 6.54 per 100,000 people, the eighth-lowest in the U.S. and less than half the U.S. average of 14.11. Rhode Island is the only New England state above the national average.

Lamont, a Democratic governor approaching the mid-point of his first term with a high approval rating due to his response to the pandemic, walked a familiar line Monday at the first of his twice-a-week COVID briefings, offering an equal measure of caution and hope.

He warned of seasonal dangers ahead from social life moving indoors, combined with the mass travel of college students and others for Thanksgiving and Christmas. He also preached the efficacy of staying the course set in Connecticut.

“We can take control over our own destiny,” Lamont said.

His briefing was focused on placing Connecticut’s recent increase in cases in a relatively comforting context: A trend expected by worldwide modelers of the pandemic, especially given the surge in Europe; but still a harbinger to be ignored at the state’s peril.

His message was reinforced by a guest with a unique perspective: Dr. John Murphy, the president and chief executive of Nuvance Health, the hospital network that straddles the border with New York. Its seven facilities include Danbury Hospital, where the first COVID case in Connecticut appeared on March 6.

Murphy, among the first of the medical professionals to join the governor in addressing the novel coronavirus, was deemed over the weekend by the governor’s staff as the right person to talk about the next wave — and why it should claim fewer lives than the first one.

He was invited Sunday after Meadows downplayed mitigation efforts in a CNN interview that drew wide attention and Dr. Scott Gottlieb, an informal Lamont adviser who directed the Food and Drug Administration under Trump, called for a national mandate on wearing masks.

Murphy said COVID models vary, with predictions of a peak ranging from the end of November to February. He expects a peak in mid-January.

His assessment was far from bleak.

Murphy described the lessons learned since March, including the efficacy of wearing masks and a more aggressive course of treatment, such as the routine use of remdesivir, an anti-viral that does not cure COVID but can lessen its impact by hampering the replication of the virus in the body.

Remdesivir is now administered not only to patients hospitalized with COVID, but those who are treated in emergency rooms and sent home, he said. Doctors also are quicker to administer blood thinners to protect against one of COVID’s most dangerous complications: blood clots.

More younger patients are contracting the disease, and they have fewer co-morbidities. As a result, Murphy said, the COVID mortality rate has fallen by more than half, to less than 10%. COVID hospitalizations in June averaged 14 days, while they are now less than seven days. 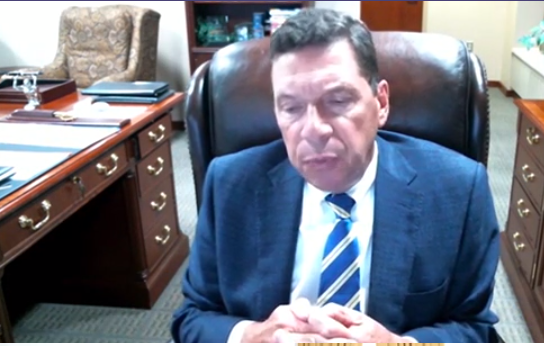 While masks generally are promoted as helping the wearer stop the spread of disease to others, Murphy said there is evidence that they also afford protection to the wearer. Even in cases where the wearer of a mask contracts COVID, the mask can limit the viral exposure and produce a milder case, he said.

“The more we look at masks, the more we realize even cotton masks do, in fact, reduce both the spread from the wearer as well as protect the wearer,” Murphy said.

Lamont continued to resist the notion that harsher restrictions must be mandated, as opposed to the state’s current policy of permitting municipal officials to impose them based on local caseloads.

“By convincing them it’s the right thing to do for themselves, their family, their community and beyond,” Lamont replied, when asked about his approach. “I can’t enforce my way to 100% of the people wearing the mask. I can’t sit around fining people on every street corner.”

Connecticut has some of the best experience in getting people to wear masks, he said.

But the governor said his reliance on voluntary cooperation is not unlimited. During his briefing, he complimented local officials in Fairfield for closing a pub that he says was willfully violating his executive order closing bars and limiting indoor restaurant capacity to 50%.

Businesses that are flouting public-health guidelines deserve to be closed, he said.

Murphy said the possibility that a half-dozen vaccines could be available next year is to be applauded, but not taken as a reason to abandon social distancing and other precautions.