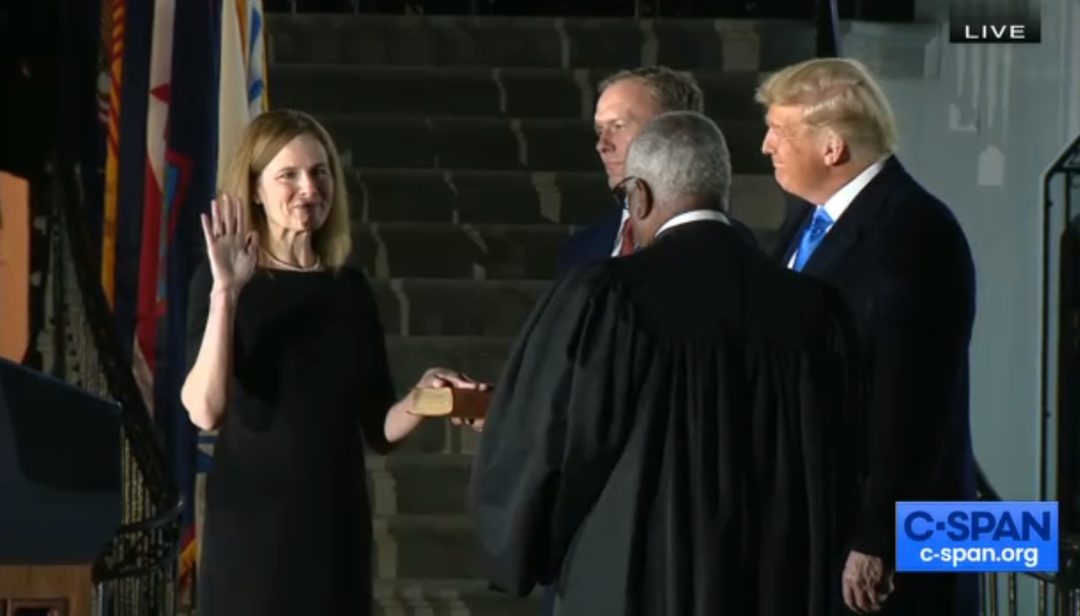 As expected, Judge Amy Coney Barrett was confirmed to the U.S. Supreme Court by a bitterly divided Senate on Monday evening, after Democrats failed to stop or slow her ascension to a high court that will now tilt further to the right.

Barrett was quickly sworn in to the high court Monday evening at a White House ceremony after the 52-48 vote. Only one Republican, Susan Collins of Maine, voted against the nomination.

The confirmation vote was preceded by hours of speeches by Democrats who said the process of rushing Barrett to replace the late Justice Ruth Bader Ginsburg right before the Nov. 3 elections was illegitimate.

“You can’t win them all, and elections have consequences,” McConnell said.

After the Senate voted to confirm Barrett, Blumenthal said, “There is a clear and present danger of a humanitarian, moral and constitutional crisis as the Supreme Court shifts radically to the right and prepares to strike down laws vital to health and American values.”

Blumenthal and fellow Connecticut Sen. Chris Murphy joined all their Democratic Senate colleagues in objecting to Barrett’s confirmation for various reasons, including concerns she will vote to overturn the seminal abortion rights law, Roe v. Wade, and the Affordable Care Act, which has been challenged in the Supreme Court by a group of Republican attorneys general. Oral arguments in the case are scheduled for Nov. 10.

In his floor speech, Murphy said Barrett’s confirmation “is directly connected to the question as to whether or not this country is going to be able to turn the corner on COVID.”

“The first case Amy Coney Barrett will likely hear … will be a case on the Affordable Care Act, a case that asks the Supreme Court to invalidate the entirety of the ACA,” Murphy said. “That’s 23 million people losing health care, that’s 130 million people all across this country who have pre-existing conditions potentially losing protections under the ACA.”

After the vote, Murphy said “Republicans just accomplished what they’ve been trying to do for years: weaponize the courts to accomplish their hugely unpopular agenda that they couldn’t get done in Congress.”

Blumenthal and Murphy also said Barrett threatens to limit women’s access to health care and would rule to invalidate gun laws approved by states like Connecticut in response to mass shootings.

Democrats also protested that Barrett would vote to give President Donald Trump the advantage if the Supreme Court is involved in a disputed election, just as the high court determined the results of the 2000 presidential election when results in Florida were disputed.

“Rushing this nomination on the eve of the election means that she will join them possibly to vote on the election itself while on the court. Is that view apocalyptic? Not if you believe Donald Trump, who said the reason why he wants a ninth justice is [for the court] to decide the election, not the voters,” Blumenthal said.

“Marginalized communities across the country deserve a Supreme Court that will advance and improve the rights Justice Ginsburg fought to ensure, not tear them down,” the group said in a statement. “Judge Barrett’s confirmation threatens to eliminate the freedom to decide whether, when and how to start a family; rescind protections for survivors of sexual violence and harassment; and unravel decades of hard-fought progress towards equality for LGBTQ+ communities. ”

With the confirmation of Barrett, Trump has placed a third of the justices on the Supreme Court, including Neil Gorsuch and Brett Kavanaugh.