Land of Steady Habits? Rematches are the fashion.

Do-overs are in vogue in Connecticut's state legislative races 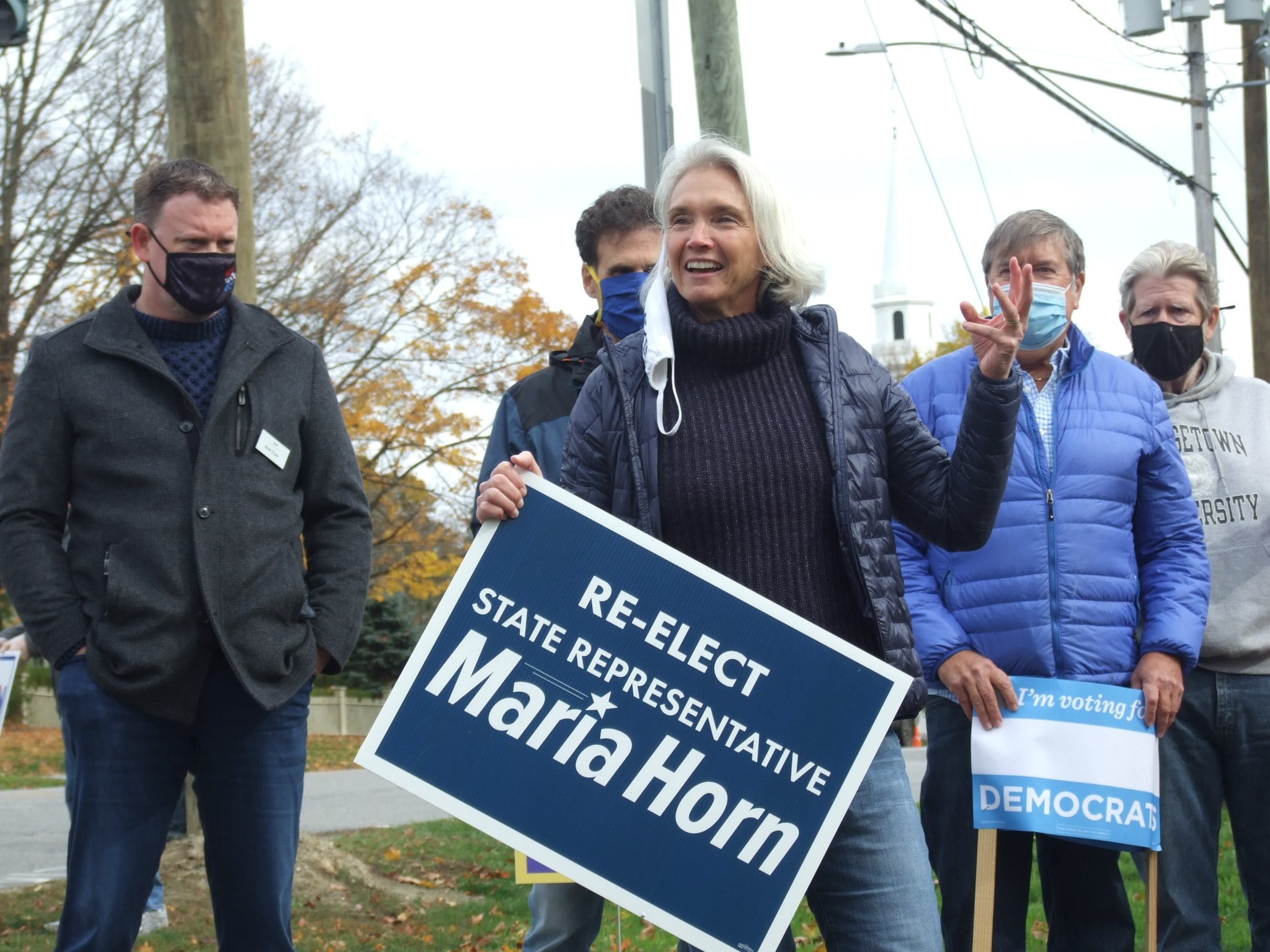 Rep. Maria Horn campaigning in the northwest corner this month.

On this day in 2018, when the favored Red Sox beat the Dodgers to win the World Series in five games, Democrat Maria Horn was just days away from a stunning upset over state Rep. Brian Ohler, R-Canaan, in the sprawling 64th House District of northwest Connecticut.

The Dodgers were in the Series again this year, winning this time. The suddenly woeful Sox were not. But for Horn, it’s 2018 all over again: The Democrat is in a rematch with Ohler, the one-term Republican she unseated by 90 votes after a recount. Horn and Ohler are not alone.

Political sequels are the fashion this year in the Land of Steady Habits.

Eight of the 36 state Senate races are do-overs, as are 26 of the 151 state House races. In other districts, challengers are running again in districts where the incumbents opted for retirement over rematch.

The willingness to run again is a reflection of several factors, among them a continuation of a trend evident two years ago: Democrats, many of them women in swing or even Republican-leaning districts, moved to political activism by President Donald J. Trump.

“I think people caught the bug,” said U.S. Sen. Chris Murphy, a Democrat. “Trump’s been a recruiting dream for Democrats.”

Martha Marx, a Democrat from New London who got 48% of the vote losing two years ago to state Sen. Paul Formica, R-East Lyme, in the 20th Senate District, knew on election night that she would try again in 2020.

“When I called Paul to tell him congratulations, I said, ‘See you in two years,’ “ Marx said.

Marx is one of the Democratic women who joined the March on Washington in 2017, then ran for office in Connecticut in 2018. Others skipped Washington, but resolved to get active in Connecticut after Trump’s victory.

“I was definitely inspired by the national election,” said Stephanie Thomas of Norwalk, a Democrat who challenged Rep. Gail Lavielle, R-Wilton, in 2018, losing with 48% of the vote. Lavielle, a five-term lawmaker, declined a rematch this year.

The COVID-19 pandemic is generally believed to benefit incumbents by hampering door-to-door campaigning and discouraging large gatherings. But a repeat effort by challengers is a benefit in 2020.

Marx, a visiting nurse and the president of an AFT Connecticut affiliate that represents nurses and home health aides, is relying on phone outreach, including 5,000 telephone conversations she has had with voters. Formica, who was elected to the Senate in 2014, is a former first selectman and the owner of a popular fish house. 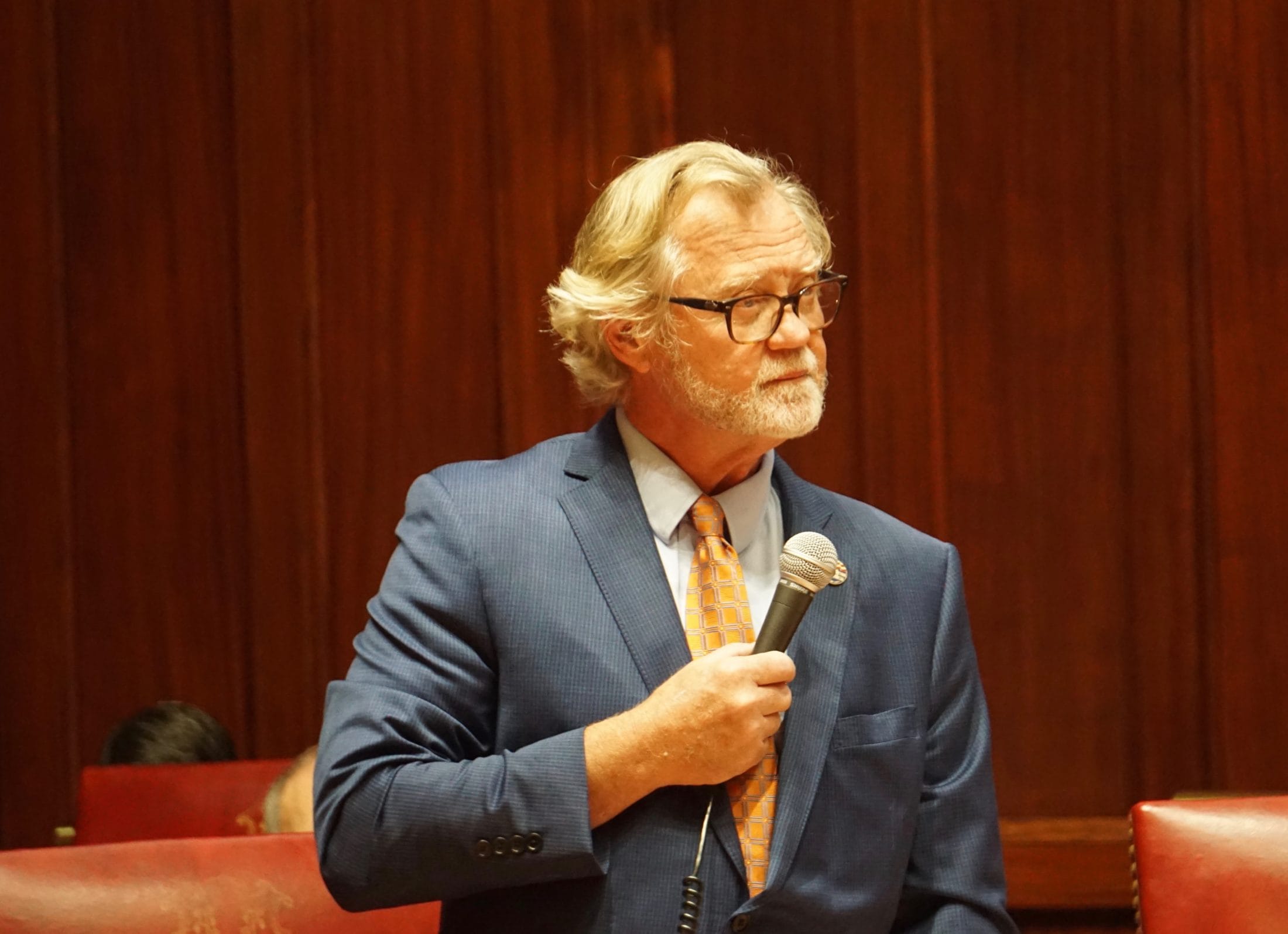 GOP Sen. Paul Formica, above, is in a rematch with Martha Marx, a Democrat from New London who got 48% of the vote two years ago.

This year, Republicans like Formica are keeping their distance from Trump, while Democrats like Marx taunt them for not denouncing the president.

Some of the rematches are among the most competitive this cycle, when Democrats are expected to increase their current majorities of 22-14 in the Senate and 91-60 in the House. The only question is by how much.

The last president with significant coattails in Connecticut was Barack Obama in 2008, who carried the state with 61% of the vote. Republicans won only 37 seats in the state House that year, their worst showing since the post-Watergate election of 1974, and 12 in the Senate.

But down-ballot Republicans have benefitted from ticket splitting in most years.

Republicans won 72 House seats that year, just four shy of their first majority since the Reagan landslide of 1984, and scored an 18-18 tie in the Senate. Ironically, Trump was a bigger drag on the Republican ticket here in 2018, when he was not on the ballot.

Not all the rematches are competitive. Rep. Vincent J. Candelora, R-North Branford, who is expected to be the House minority leader next year, is facing Vincent J. Mase for the third time. Candelora won 86% of the vote in 2016 and 62.3% in 2018.

The state’s public financing programs allows challengers to gamble on a long shot in districts that are not competitive, Candelora said.

“Money may have served as a barrier in the past,” he said.

Money is not everything. Twenty-eight House members and four senators, mostly Democrats in non-competitive districts, are either unopposed or have only a minor-party opponent.

While the GOP fears a blue wave this year, three Republican incumbents who lost close races in 2018 are trying to regain their House seats: Ohler against Horn in the 64th; Robert Siegrist against Rep. Christine Palm of Chester in the 36th; and Scott A. Storms against Rep. Jane Garibay of Windsor in the 60th. Palm won with 50.82% of the vote last time, Garibay with 52.86%.

Democrat Lucy Dathan of New Canaan unseated Republican Fred Wilms of Norwalk with a convincing 55% of the vote in the 142 House District, but Wilms is attempting a comeback. Dan Carter and John Shaban, Republicans who left the General Assembly to run for Congress in past years, are also seeking their old seats. Carter’s is held by Rep. Raghib Allie-Brenna, D-Bethel; Shaban’s by Rep. Anne Hughes, D-Easton.

“They have a passion for public service,” Candelora said. “I’m not surprised they are jumping back in the ring. I’m happy about that.”

Ohler, a 5th-generation resident of the northwest corner, said he is testing whether his loss to Horn, a transplanted New Yorker, was a fluke.

“There were a number of variables for our loss, whether it was the animosity towards President Trump, or people who thought I was a shoo-in and didn’t vote,” said Ohler, the director of security for a local hospital. “This time around, they are very cognizant of the fact every vote counts.” 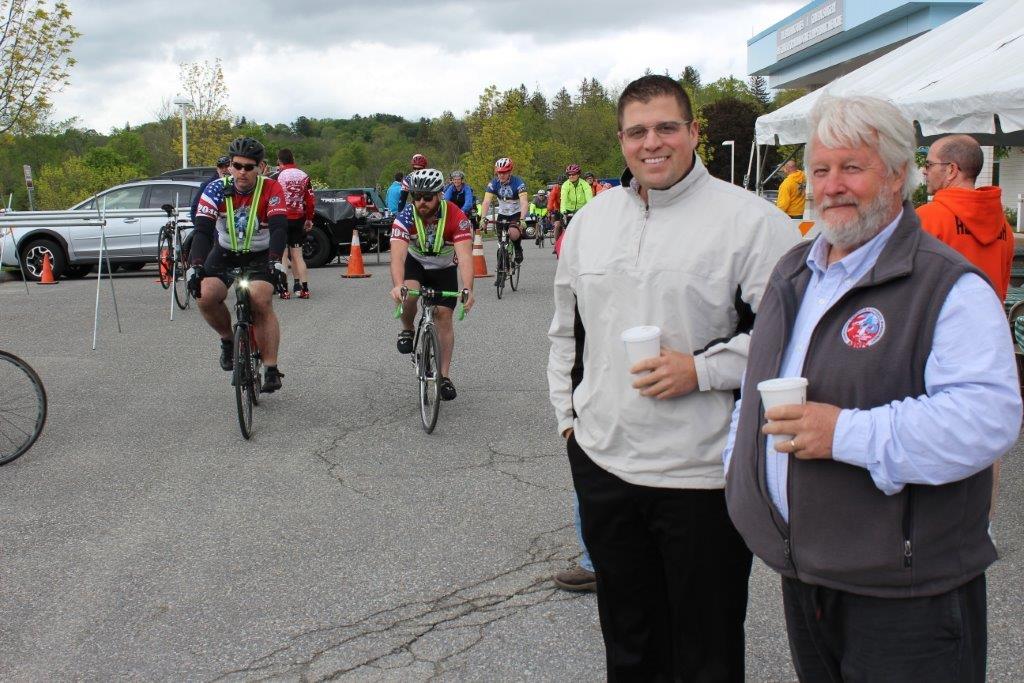 Brian Ohler, seen here in 2017 with State Senator Craig Miner at an EMS bike ride in Sharon, is attempting to take back his former House seat from Democrat Maria Horn.

Horn, a former federal prosecutor in the Southern District of New York, said the district has seen an influx of new people moving there since the pandemic, helping to swell enrollment in under-populated schools. Horn and Ohler say it is unclear how that has changed the district’s politics.

Horn emphasized that she is a full-time legislator, which she says is important for a district that is a 90-minute drive to Hartford and takes 45 minutes to traverse. She said she is not making her rematch personal, following a template set in 2018.

“I have always made room for people to like both of us and make a choice about who is better for the region and who can make a bigger impact,” Horn said.

Democrats worry about Rep. Catherine Abercrombie, D-Meriden, who won her first term in 2004 and won re-election in 2018 with just 51.6% against Lou Arata, her opponent again this year.

Another rematch comes with a back story: Democrat Phil Young defeated Republican Jim Feehan by just 13 votes in the 120th House District of Stratford. If that wasn’t dramatic enough, it turned out that as many as 75 voters were given the wrong ballot, prompting an unsuccessful court fight to force a new election.

But more of the House rematches are seen as opportunities to unseat Republicans or flip open seats now held by the GOP.

Rep. Mitch Bolinsky, R-Newtown, escaped in 2018 with a 50.54% win over Rebekah Harriman-Stites. In the Farmington Valley, Republican Leslee Hill of Canton won an open seat long held by a Republican in 2018, edging Democrat Eleni Kavros DeGraw with 50.48%. Both Democrats are running again.

In the 101st House District of Madison and Durham, a shoreline district where Trump is unpopular, Democrat John-Michael Parker is trying again after coming within 18 votes of unseating Rep. Noreen Kokoruda, another contest resolved by a recount.

In January, Republican Brian Farnen won a special election in the 132nd House District of Fairfield, a community that has become a political battleground in local and state races, by just 79 votes over Democrat Jennifer Leeper. She is on the ballot again.

Trump, who polled 38% here in 2016, will not be a help to Farnen, who hopes voters return to their habit of ticket-splitting.

The Senate rematches offer more opportunities for Democrats than Republicans.

Formica, who won with 51.99% over Marx in 2018, is one of six incumbent Republican senators facing rematches:

One of the two most vulnerable Senate Democrats is Sen. Mary Daugherty Abrams of Meriden, who is facing the man she unseated last time, Len Suzio of Meriden. (The other is Sen. Alex Kasser of Greenwich, who won a GOP seat with a bare majority of 50.4% over Sen. Scott Frantz. He is not attempting a comeback.)

Suzio was elected to the Senate in a special election in 2011, then lost races to Dante Bartolomeo in 2012 and 2014 before unseating her in 2016. Abrams beat him in 2018 with 52.41% of the vote. With two rematches with Bartolomeo and now one with Abrams, Suzio is king of the political sequels in Connecticut.