The Associated Press called the race shortly after the polls closed at 8 p.m. for Biden, who will receive Connecticut’s seven electoral votes. The national race remained too close to call Wednesday morning, as officials in the battleground states of Wisconsin, Pennsylvania and Michigan and elsewhere continued counting ballots. Trump claimed victory in the race early Wednesday morning and threatened to take election officials in still-undecided states to the U.S. Supreme Court to stop them from counting the remaining votes.

With overall turnout in Connecticut projected to exceed 80%, more than 658,000 voters had cast absentee ballots based on tallies completed prior to Election Day, Secretary of the State Denise W. Merrill reported Tuesday. Thousands more are expected to be part of the final count. 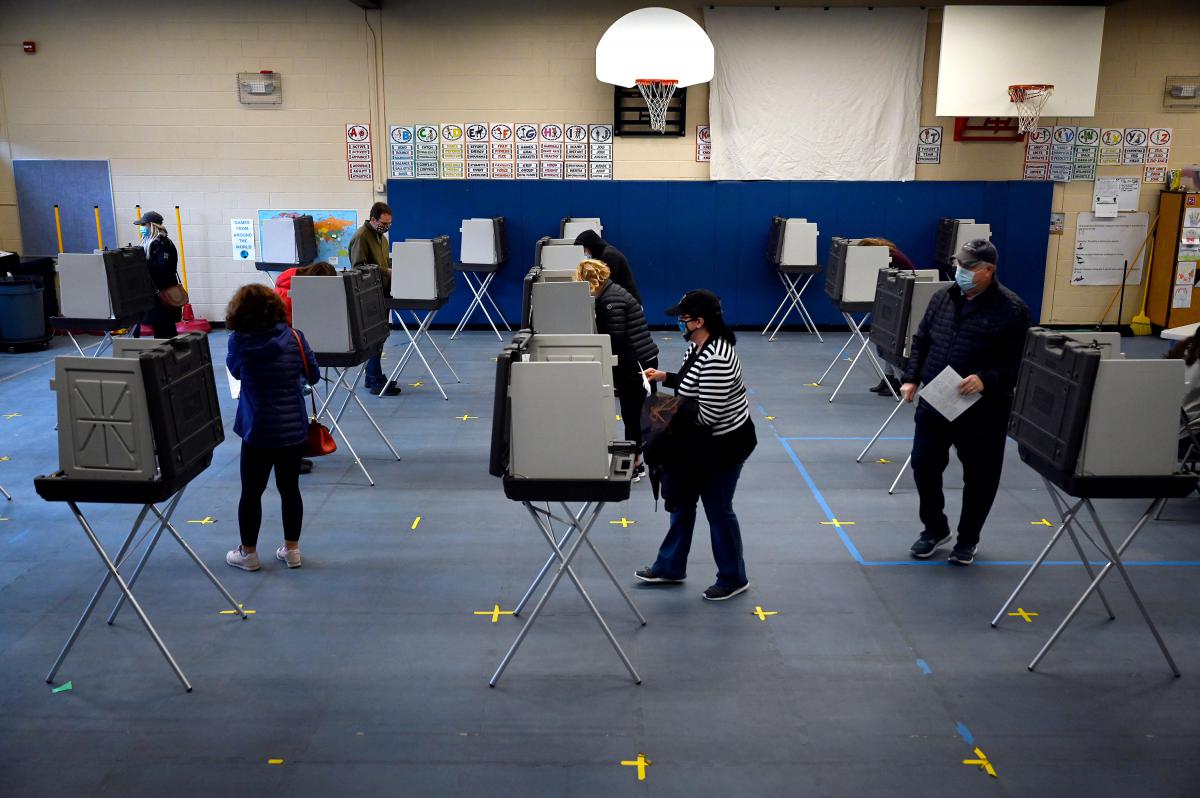 A steady stream of people voting at Latimer Lane School in Simsbury.

About 74% of voters cast ballots in the 2016 presidential race.

The massive turnout, combined with Trump’s unpopularity in heavily Democratic Connecticut, swamped the president, who lost here four years ago on his way to winning the White House.

“We’ve been looking forward to this day for a long time,” said Gov. Ned Lamont at a Democratic post-election event. He was optimistic Tuesday night that Democrat Joe Biden will win despite trailing in Florida.

“They never can make up their mind in Florida, and it’s going to be a late night,” Lamont said.

Lamont said he wants “absentee ballots counted in the next day or two” and is glad that balloting went smoothly in the state.

“The president cast a lot of shade on the integrity of this election,” he said. He added that he will “sit back, pull up the blanket and watch (the returns) for a few hours.”

Trump has been a polarizing factor in statewide elections here since his 2016 presidential campaign.

Highly unpopular in Connecticut, Trump’s policies on immigration, health care and other social issues have been an easy target for Democrats here — and a source of frustration for Republicans.

A Sacred Heart University poll late last week had the president trailing Biden by 25 points. With 80% of precincts reporting early Wednesday, Biden had about 57 percent of the vote, according to figures from the Secretary of the State.

“That’s really a slap in the face to the voters of the state,” said Deputy House Minority Leader Vincent J. Candelora, R-North Branford, who added the Democrats’ Trump-centric campaign has come at a cost. “I think that’s why you see them losing the blue-collar vote.”

“It’s pure steamroller politics,” Fasano said. “And Connecticut is not better off for it.” 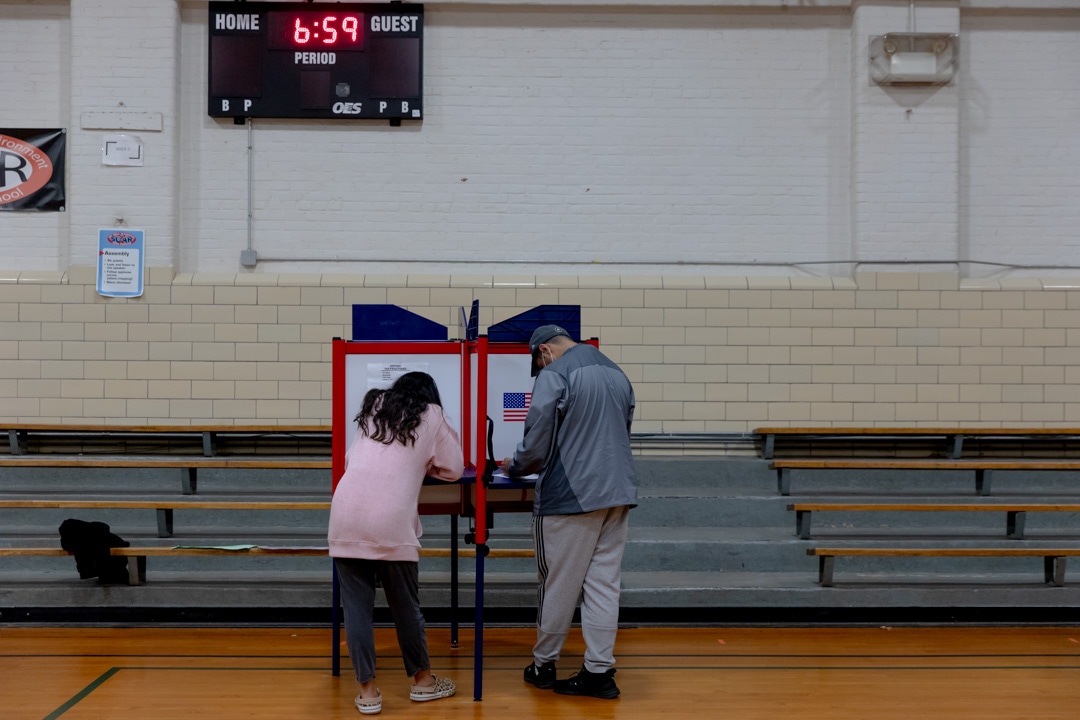 A family votes on Tuesday at the Ridge Road Elementary School in North Haven.

More importantly, Ritter said, Trump’s social and political agenda is so worrisome to Connecticut voters that all candidates must address it.

“This guy went too far with his actions and deeds, and some voters want to send a personal message to him,” Ritter added. “And it’s not enough to say ‘I’m a Republican but I’m not Trump.’ If you don’t want to be tarred and feathered with the president, you have an obligation to distance yourself.”

Mike Tiqui, an emergency room doctor at the Hospital of Central Connecticut in New Britain, said he voted for Biden in large part because of the Trump administration’s failure to adequately respond to the COVID-19 crisis.

“The biggest issue in my mind is the handling of the coronavirus pandemic,” said Tiqui, an Avon resident who voted at the town’s high school Tuesday afternoon. “I’m a doctor, so I really don’t think it’s been handled well on many levels, including at the federal level.”

Longtime supporter of GOP: ‘There’s plenty to hate about Trump.’

Mary Pellino of Avon said her vote Tuesday for Biden marked the first time in her life she had supported a Democratic candidate for president.

“There’s plenty to hate about Trump, but there’s one reason I’m not voting for him, and that’s his criminally incompetent handling of this pandemic,” said Pellino, 57. “He has lied about it from the beginning. He’s discouraging and mocking masks. He has blamed Democrats and the deep state for his failings. It’s a global pandemic, but it’s also a national crisis, and dumping it on the states is just ridiculous.”

Pellino said her support for Biden also informed how she voted for legislators at the state level. Some of the incumbents in Avon, which include two Republicans and a Democrat, “I just wanted out,” she said.

“We’re in such a world of hurt right now,” she said, “and doing the same thing gets you the same.” 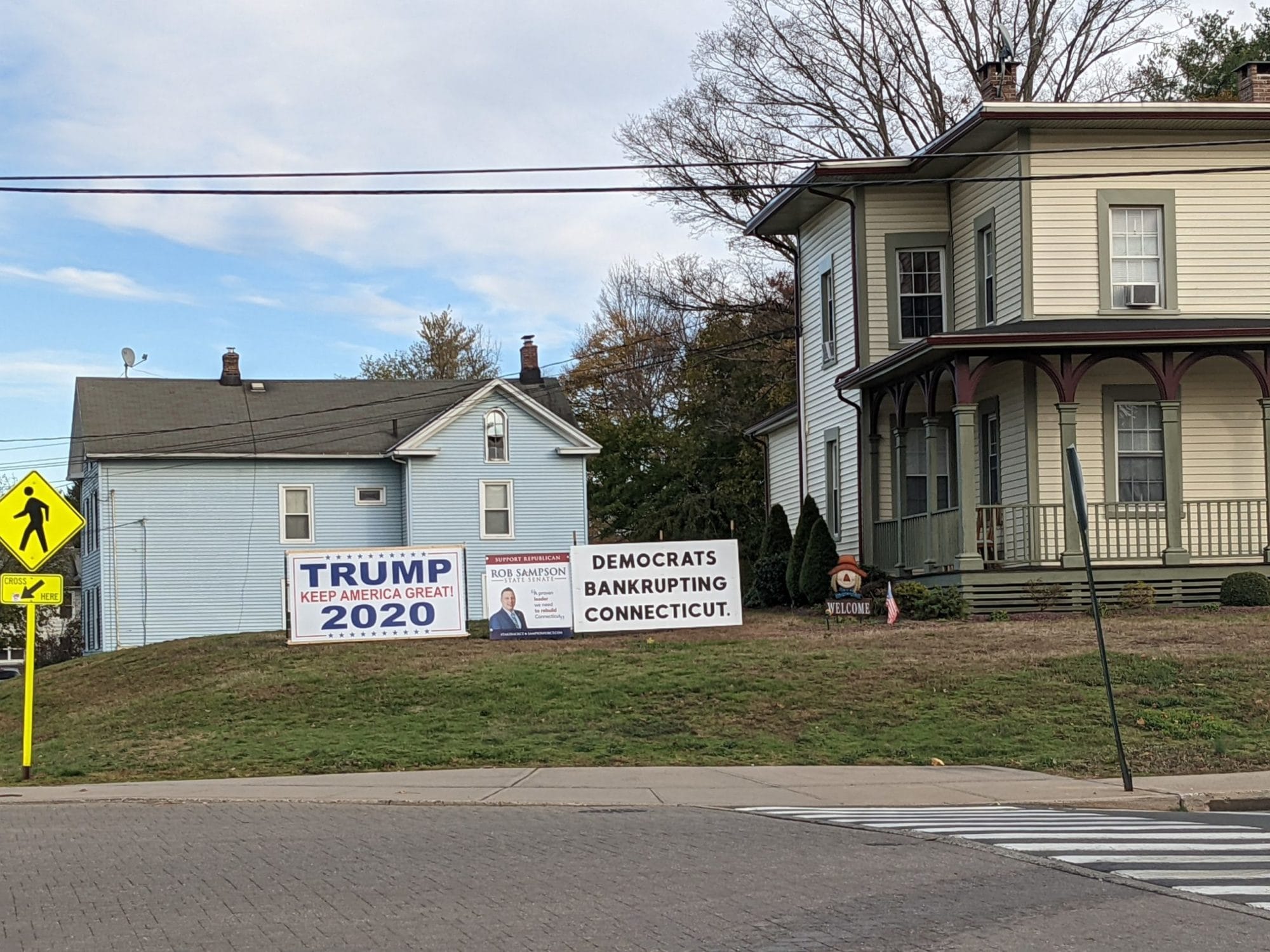 A sign showing allegiance to President Trump in Southington.

Theresa Cadrain, of Farmington, cast her ballot for Trump on Tuesday, saying she liked his work ethic and his ability to “get the job done.”

A key issue for Cadrain was Trump’s tough position on immigration.

“The immigration situation is a problem, and I think that other people have turned a blind eye to it,” she said. “Like in any other country in the world, you have to do things the right way because the regular masses cannot support all of these promises that other people keep making to them. Regular people that are striving to get their own kids health care, get their own kids educated — their backs are being broken. So we have to think of that.”

But Jackson Shostak, 19, who held signs for GOP candidates at the McKinley School in Fairfield, said that while local Republicans are more moderate than the president they would like a broader discussion of issues than just the candidates’ take on the president.

“I wanted to have somewhat of a normalized election year,” he said. “I voted primarily because of local issues.”

But not all Republicans were shying away from the president.

State Sen. Rob Sampson, R-Wolcott, one of the General Assembly’s most conservative members and a proud Trump supporter, said he’s convinced the president was helping the GOP in state races.

“I just think there’s a lot of enthusiasm,” he said. “Getting people excited and off the couch is the path to victory.”

And while much of the turnout in Connecticut was fueled by anti-Trump sentiment, Merrill said the state also was well-served by a five-month outreach effort to promote the absentee ballot option.

Unlike other states, Connecticut normally requires voters to provide an excuse, such as being ill or being out of town, to vote by absentee ballot. 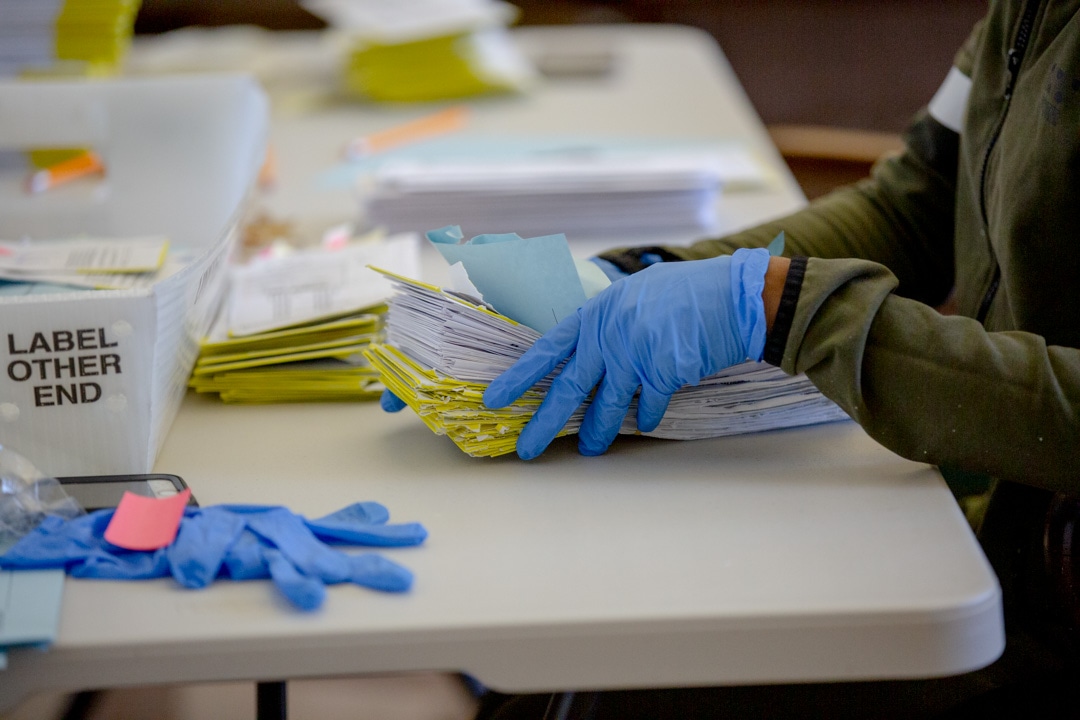 Wearing masks and gloves, volunteers at Hartford City Hall open absentee ballots, making sure they are signed and stamped, and put into a machine to count.

But the legislature and Gov. Ned Lamont modified the rules this year, allowing anyone to qualify for the illness exemption on grounds that in-person voting carried a degree of health risk during the pandemic.

“I can throw away all those speeches I used to give about the apathy of voters, because nobody is apathetic this year,” Merrill told reporters outside a polling place at the Charter Oak International Academy, a public school in West Hartford.

A line snaked out the door and around the parking lot.

Along with the crush of voters Tuesday came a few complications.

A similar problem occurred in Killingly, but in this case it involved about 20 ballots distributed at a polling place. Voters again were given ballots that included candidates for state representative from the wrong district. Merrill’s office was investigating late Tuesday.