Session opens in January, as COVID surge is expected to peak

Matt Ritter after the House Democrats endorsed him as speaker. He briefly removed his mask to speak.

The 16 Democrats who won their first terms as state representatives two days ago joined 82 incumbents in their first official post-election act Thursday: Endorsing Matt Ritter of Hartford as the next House speaker and Jason Rojas of East Hartford as their majority leader.

Typically a cross between a business meeting and freshman mixer, the post-election caucus was awkward, a consequence of the COVID-19 pandemic that shortened the 2020 session and will limit face-to-face interactions in favor of virtual meetings in the 2021 session.

“We’re going to have a session, make no mistake about that,” said Ritter, the current majority leader.

But he acknowledged that his first year as the leader of the chamber, responsible for when the House meets and what it considers, will be unlike any other. The State Capitol remains closed to the public, pushing hearings and most other business online.

Ritter is a political prodigy, elected to the Hartford City Council at age 25, the House at 28 and as its majority leader at 34. His father, Thomas D. Ritter, was the House speaker from 1993 to 1999. His mother is Justice Christine E. Keller of the state Supreme Court.

In separate caucuses, Republicans chose Sen. Kevin Kelly of Stratford and Rep. Vincent J. Candelora of North Branford as the new minority leaders of the Senate and House. Kelly was opposed by Sen. Kevin Witkos, R-Canton.

Ritter, Rojas and Candelora were chosen by acclamation, as is expected to be the case Friday when Senate Democrats meet to endorse Senate President Pro Tem Martin Looney of New Haven and Senate Majority Leader Bob Duff for new terms as leaders. 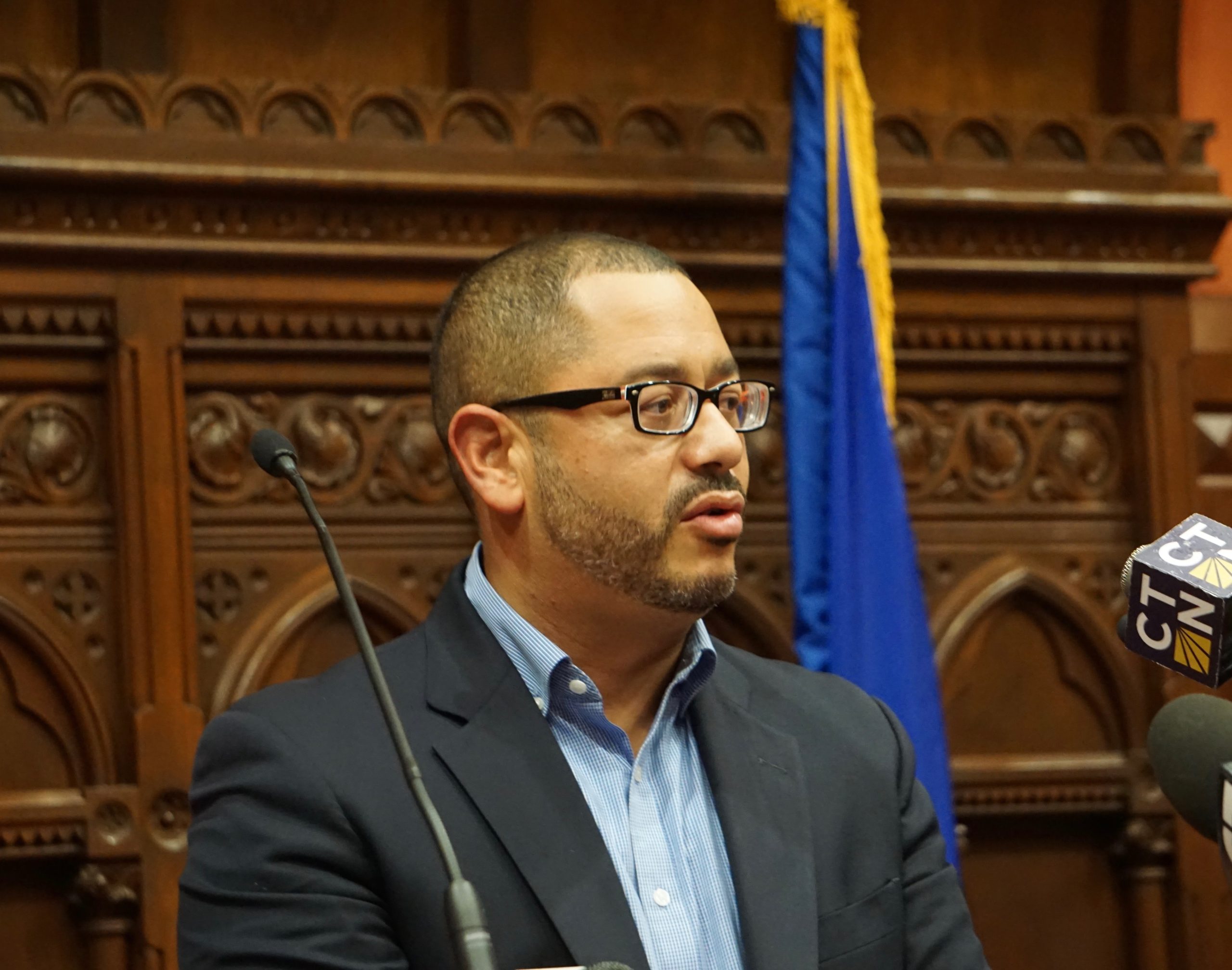 Jason Rojas, the next House majority leader, talks to reporters from a distance.

Rojas, whose parents migrated from Puerto Rico in the 1960s, and others believe he will be the first person of color to hold one of the top six leadership posts in the General Assembly.

“I’m not one who wears my ethnicity and race on my sleeve, but it’s a pretty incredible moment,” said Rojas, who currently is the co-chair of the Finance, Revenue and Bonding Committee. “I’m proud to be the person to represent this milestone event in Connecticut history.”

The incoming Democrats gathered in the House chamber, everyone in a mask. Others participated from home or their legislative offices, via Zoom. Ritter, whose ascension to the speakership was assured for more than a year before the vote Thursday, watched from a computer off the House floor.

It was a rehearsal for what is to come.

The legislature met in special session in July and September, each time acting on bills that were subjected to public hearings on Zoom. Access to the chambers during debates was limited, and House members were allowed to vote from their offices.

The General Assembly convenes on Jan. 6, when the 151 House members and 36 senators begin their two-year terms and take the oath of office. On opening day, the House will install Ritter, 38, as speaker and the Senate re-elect Looney, 72, as president pro tem.

As the House Democrats met, Gov. Ned Lamont was announcing a return to tighter COVID restrictions, a consequence of a surge in new cases that is projected to peak in January.

Ritter said that doesn’t mean the legislature can’t tackle controversial issues or significant legislation, but there are likely to be fewer bills reaching the floor of the House or Senate.

Ritter and Candelora already talked about rules and procedures.

“I think the biggest challenge is going to be communication. This business is built around communication,” Candelora said. “So it’s important to meet with people who are impacted by bill proposals. So making sure that everyone is heard going forward as bills are crafted is going to be a challenge.”

Kelly, the only new leader whose victory was not assured, said Looney called to congratulate him, but they did not talk about how the Senate would conduct its business.

“I think we’ll take one day at a time,” Kelly said. “We’ll see what the metrics are, the infection rate, the science and the facts and make an informed judgment at the time.”

COVID dominated the campaigns and elections of the incoming class, and they expect it to be a major factor at the start of their time in Connecticut’s part-time legislature.

“I think there’s maybe been a little extra attention given to us,” said Jaime Foster, a Democrat who flipped a Republican seat, winning in the 57th House District of East Windsor and Ellington. “It’s a really challenging time with COVID, but I do think a lot’s been done to try and make it possible to get oriented.”

Eleni Kavros DeGraw of Avon, who unseated a Republican in the 17th House District of Avon and Canton, came close to winning two years ago. She said she was happy to cross the finish line this year, pandemic or not.

“Finally got here,” Kavros DeGraw said. “I feel like the level of mentorship we will receive will hopefully offset the oddness the way the session’s going to have to run.”

But she laughed and added, “I think it’s going to be weird.” 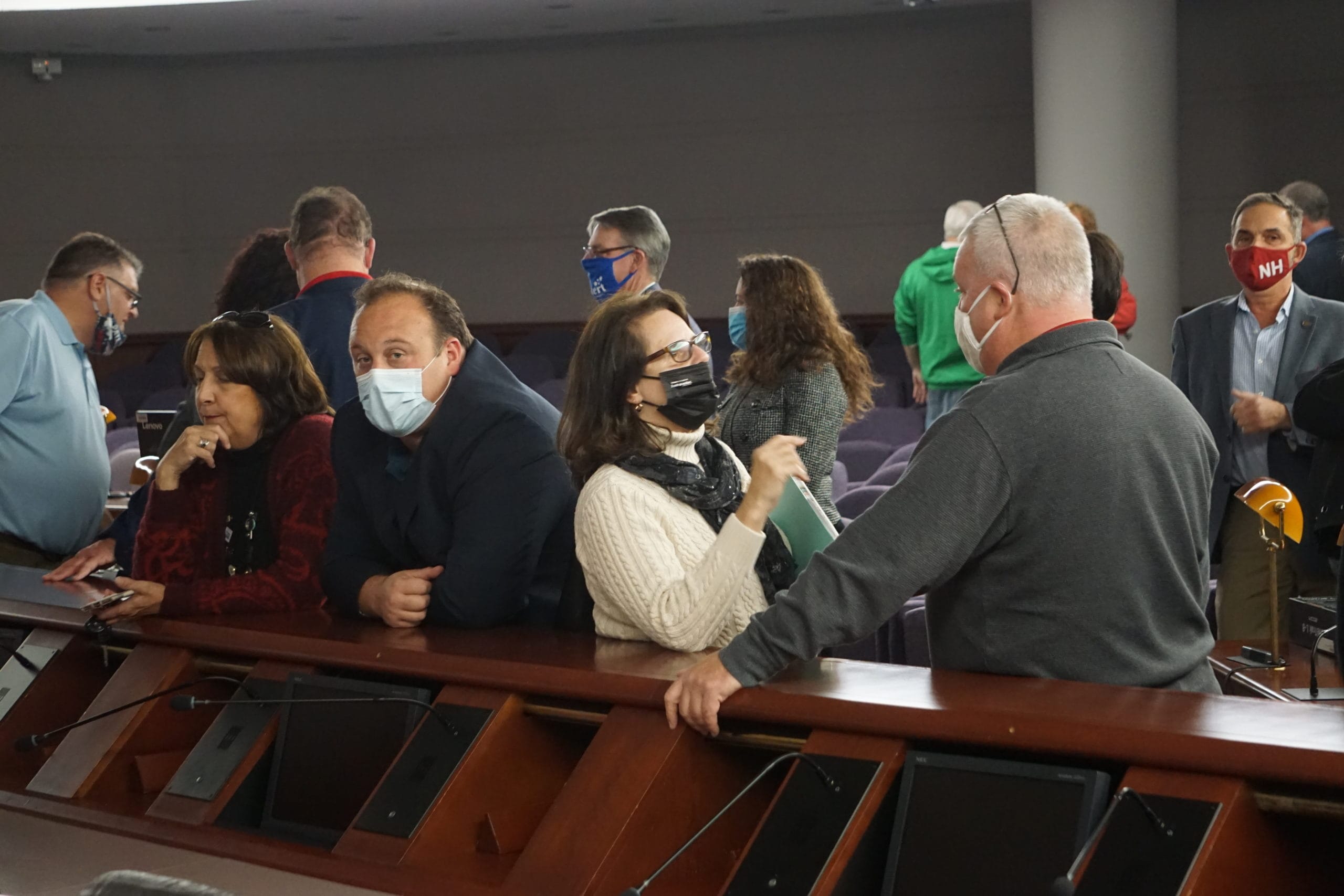 House Republicans gather for their caucus. Almost all wore masks.