Victorious Joe Biden: ‘We must restore the soul of America’ 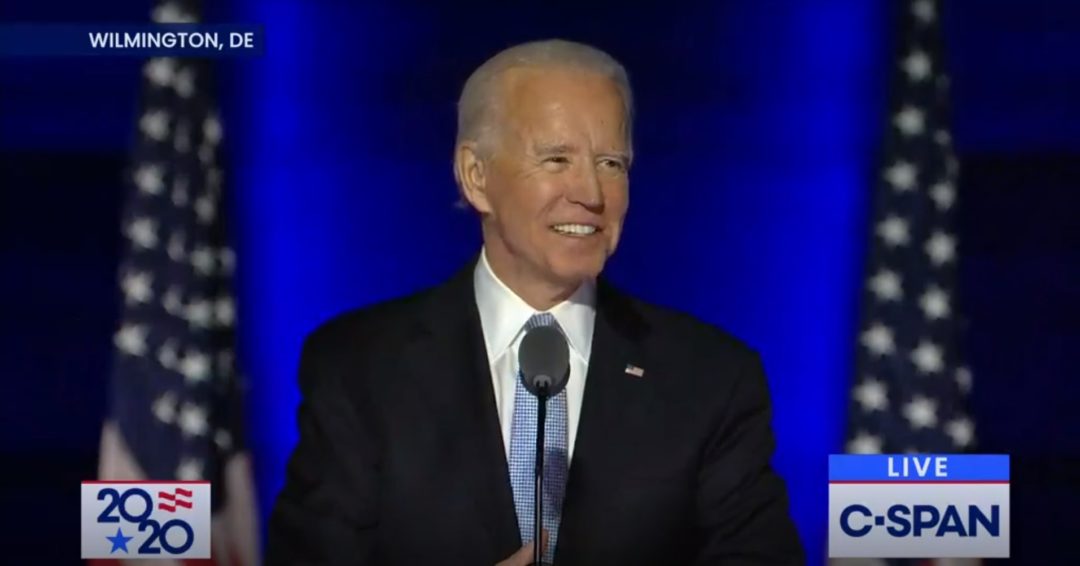 President-elect Joe Biden said he sought to become president in part “to unite us here at home” in a victory speech Saturday night that sought to put an end to the divisiveness that has marked the last four years.

“It’s time to put away the harsh rhetoric, lower the temperature, see each other again,” Biden said.

Biden’s victory was the culmination of four years of struggle for Democrats and others who opposed President Donald Trump, and it was celebrated by emotional outpourings in the streets of cities from coast to coast, including in Connecticut. Biden said he was “humbled” by the demonstrations of support.

Biden said he was a “proud Democrat” who would “govern as an American president.”

“Let this grim era of demonization in America begin to end here and now,” he said.

Biden was declared the winner of a bitter presidential election Saturday when he surpassed the 270 electoral votes he needed by winning his home state of Pennsylvania. He was then projected to win Nevada and its six electoral votes, giving him at least a 279-to-214 victory over President Donald Trump. Georgia and Arizona were among the states whose electoral votes were still in play late Saturday.

Yet President Trump said he would not concede, threatening to file lawsuits on Monday challenging the election results, which he said, without evidence, were “fraudulent.”

The 77-year-old Biden will be the nation’s oldest president. Emerging from a large field of Democrats who sought the White House, including his running mate and apparent future Vice President Kamala Harris, he was relentless in his attacks on Trump’s handling of the coronavirus crisis.

Harris will now be the highest-ranking woman — and first female vice president — in the nation’s history.

Speaking before Biden made his address from the stage in the parking lot in Wilmington, Del., Harris called the presumptive president-elect “a man with a big heart who loves with abandon.”

“And while I may be the first woman in this office I won’t be the last,” Harris said.

She also praised the crowd of supporters many of them who listened from their cars and responded by honking their horns. 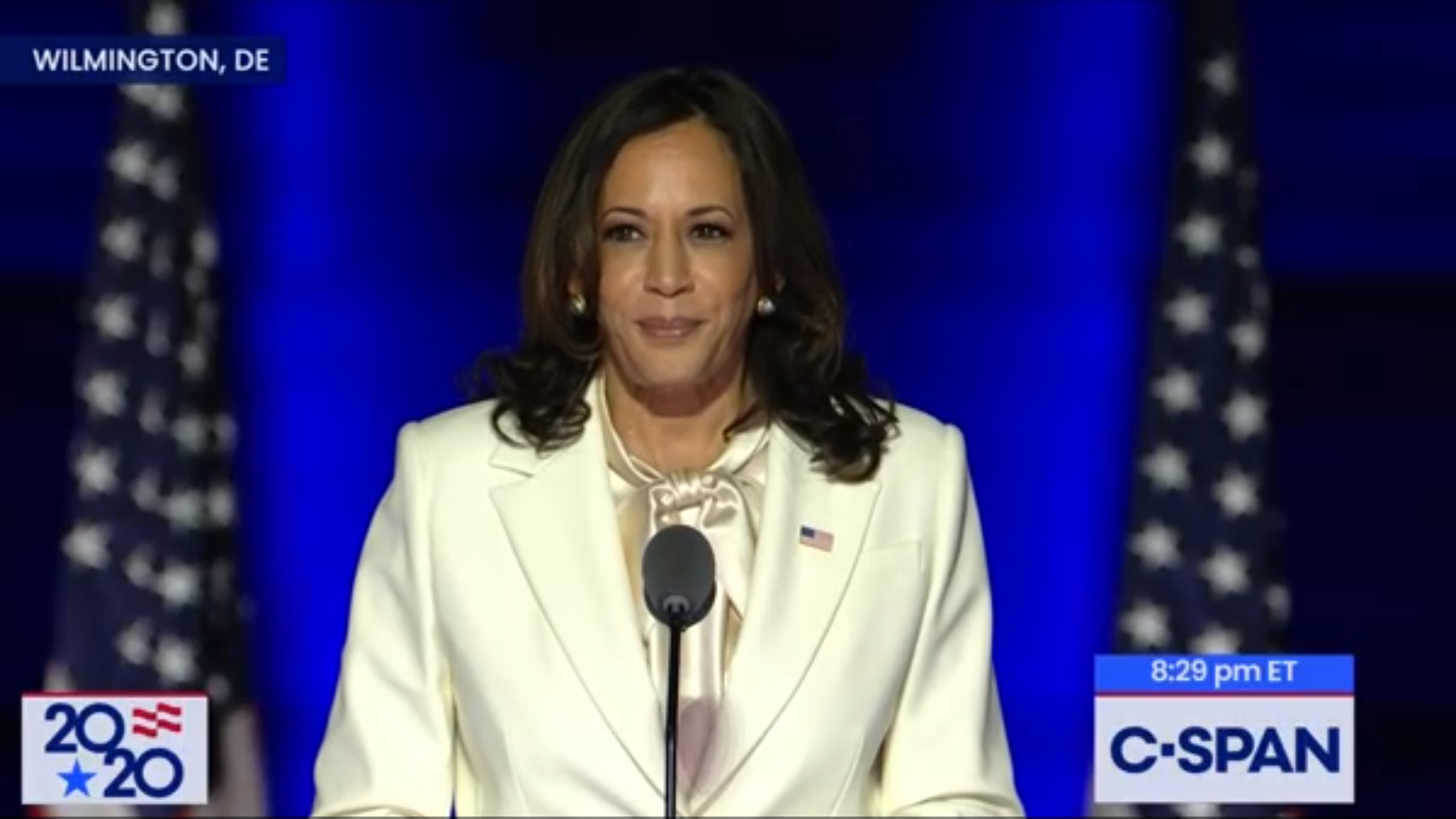 Kamala Harris will be the first woman to hold the office of vice president.

“It remains shocking that the Biden campaign refuses to agree with this basic principle and wants ballots counted even if they are fraudulent, manufactured, or cast by ineligible or deceased voter,” the president said in a statement. “Only a party engaged in wrongdoing would unlawfully keep observers out of the count room – and then fight in court to block their access.”

Campaigning in large part remotely and against a the backdrop of nationwide protests demanding racial justice, Biden was able to secure the support — at least for now — of all sectors of the Democratic Party, including its restive left wing.

A moderate who served as former President Barack Obama’s vice president, his campaign was boosted with the support of Black voters who helped resuscitate his bid for his party’s nomination in the key South Carolina primary and also helped usher him to the White House.

In his victory speech, Biden said “when the campaign was a its lowest point, the African-American community stood up for me.”

He ran from the start on the idea that his campaign was a battle for the “soul of America” and promised a “return to normalcy,” themes he repeated in his speech on Saturday.

A ‘seismically good figure for Connecticut’

Biden’s hard-fought victory is a boon for Connecticut, the state’s Democratic lawmakers said.

“Joe Biden is a man for this time, and I am thrilled the American people have spoken and by decisive margin chosen him as our next president,” said Sen. Chris Murphy. “This is good news for democracy, our country and Connecticut.”

Blumenthal said it was “a great day.”

“For the people in Connecticut who voted for Donald Trump, my hope is that we put aside our differences and confront the huge challenges ahead,” Blumenthal said.

“It is … important to recognize that this result leaves half the country jubilant and the other half frustrated and anxious,” she said. “I want to assure my constituents that I am a representative for everyone. I hear all of your voices, and I will continue to fight tirelessly for all of my constituents.”

Murphy and Blumenthal have predicted that the president-elect, who ousted Trump by running up the vote in states the president won in 2016 including Pennsylvania, Michigan and Wisconsin, will finally result in an infrastructure bill that would help Connecticut with much needed repairs to its roads and bridges and strengthening the Affordable Care Act, which had been under attack by Trump since the first day of the Republican’s presidency.

“And he’s going to put people in government agencies who actually want government to work,” Murphy predicted. “That’s a big change over the next four years.” 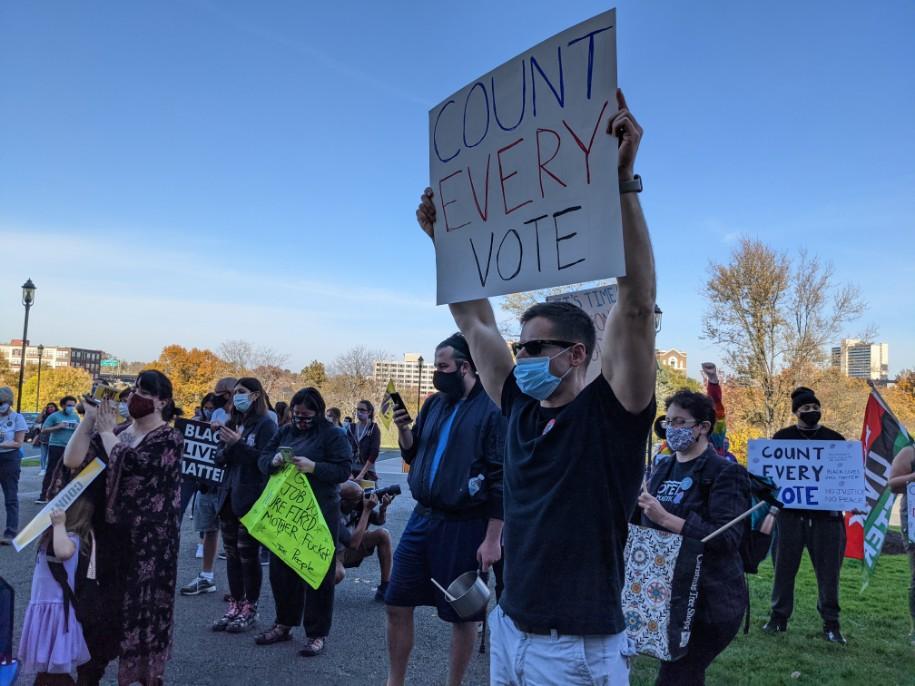 Biden supporters faced off against Trump supporters in Hartford before the race was called by the networks Saturday morning.

With Biden’s election, Connecticut’s all-Democratic congressional delegation will shift from being some of the harshest critics of the occupant of the White House to the president’s supporters and defenders.

Blumenthal said that even without Democratic control of the Senate, Biden will be able to make changes through his executive authority that will aid Connecticut and the nation.

Those include undoing what Blumenthal says are damaging environmental measures imposed by Trump. Biden has also said he would also make the United States once again a member of the Paris Agreement, United Nation’s accord aimed at combating climate change.

“And he can put in place an Attorney General who will prosecute wrongdoing,” Blumenthal said.

He also said that Biden, as a former senator who was able to reach across the aisle to negotiate legislation, would be able to make deals with Sen. Mitch McConnell, R-Ky., who would likely continue to lead the Senate if it remains, as expected, in GOP hands.

“If you wanted someone who can work with a Republican Congress, there’s no one better than Joe Biden,” Blumenthal said.

Despite their praise for the president-elect, Connecticut’s federal lawmakers were not among the first to endorse Biden’s’ bid for the White House, with the exception of Rep. Jim Himes, D-4th District. The others did not endorse Biden until Sen. Bernie Sanders, I-Vt., dropped out of the race and threw his support behind the former vice president.

Blumenthal, one of Trump’s harshest critics, said he has a 20-year relationship with Biden largely through his friendship with Beau Biden, the president-elect’s deceased son who served as Delaware’s attorney general when the senator was Connecticut’s attorney general.

Meanwhile, Murphy  and Blumenthal have  predicted Biden would have to fend off Trump’s legal challenges as he prepares for the presidential transition.

“He can do it, but (the lawsuits) are going to make the transition much more difficult,” Murphy said. “Trump is going to litigate this election until the last day.”

Blumenthal, meanwhile, said “the simple truth is that there is no thread of factual evidence or legal support for these false claims.”

‘They are frivolous and they will be thrown out at some point,” the senator said. 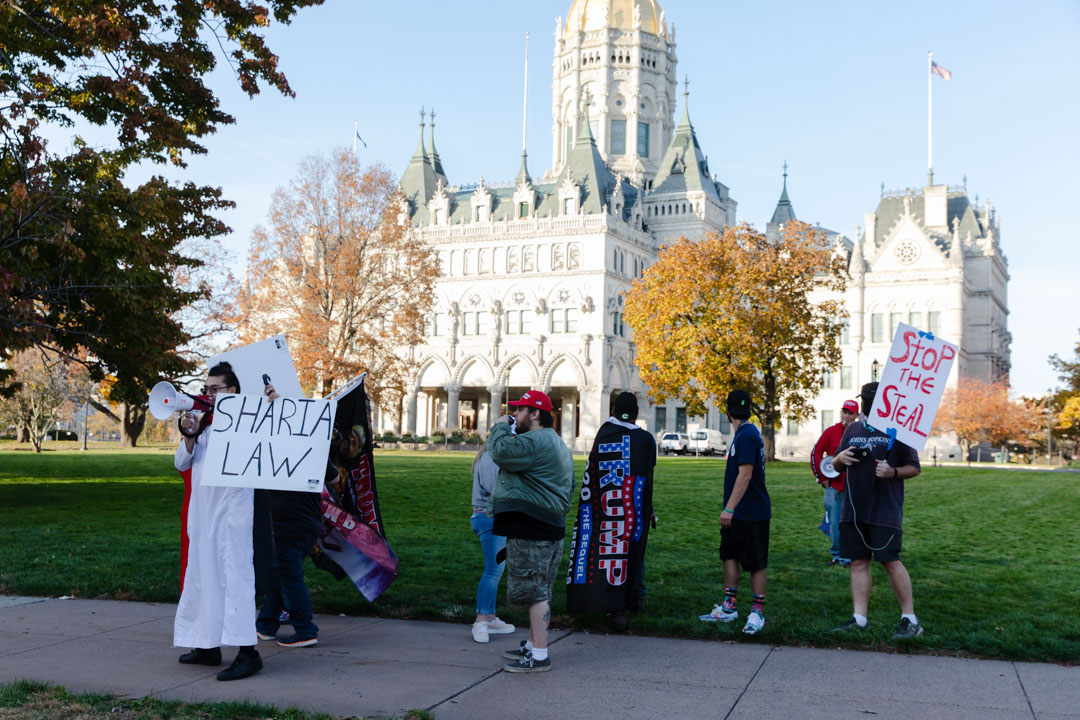 Supporters of Donald Trump protest in front of the Connecticut State Capitol after news outlets called the presidential race in Biden’s favor on Saturday.

“It is time to embrace the result that, like in any election, one side has prevailed,” Courtney said. “The peaceful transfer of power is a cornerstone of this nation, our history and our democracy. America is ready to move forward with a new president, and to begin the hard but necessary work of uniting our country.”

“The American people have spoken,” Larson said “I’m looking forward to working with him and his administration. It’s time for us to get to work, unify the country and defeat this pandemic.”

Biden has indicated he does not want to wait for any of Trump’s legal challenges to be settled and intends to immediately shift into mode of president-elect to continue the momentum generated by his electoral win.