The senior staff of Gov. Ned Lamont learned Monday what they had long suspected: Given the work-at-home routines developed during the long COVID-19 pandemic, life in self-quarantine due to a colleague’s positive test is only mildly disruptive.

Even if you’re the governor.

Lamont conducted his normal Monday briefing on COVID, sharing news of 22 COVID deaths, 98 hospitalizations, 4,639 new cases and a positive test rate of 5.4% since Friday. But he spoke from his home in Greenwich, not in his makeshift studio at the State Capitol.

And the briefing still was coordinated by Max Reiss, the communications director who learned Friday evening he had tested positive for COVID. Reiss is asymptomatic, and he ran the briefing on Zoom from his home in West Hartford.

Before the pandemic, state government had purchased and implemented Microsoft 365, a software suite of computer tools, including Microsoft Teams video conferencing and cloud-based storage and sharing of documents.

“The transition to everyone working from quarantine has been seamless,” said Josh Geballe, the state’s chief operating officer. “We were all on Teams, meeting with each other all weekend. It was marginally different than being in the room.”

Paul Mounds, the governor’s chief of staff, said an emergency-management exercise for a simulated winter storm went on as scheduled Monday — conducted virtually, as has been the case with the actual COVID emergency since March.

Lamont wryly began his briefing, speaking from a book-lined study that he called “my new quarantine bunker.” He said he tested negative again Monday.

Monday and Thursday are COVID days for Lamont. Not only does the governor conduct a virtual televised press briefing on those days, he and his staff drop off sealed containers with nasal swabs from their twice-a-week, self-administered COVID tests.

Reiss got his positive results Friday evening, hours after joining the governor, two U.S. senators and others at a crowded press conference in West Haven about a fatal steam pipe explosion at a Veterans Affairs hospital.

It was Reiss’ first public outing with the governor in two weeks. As a precaution, Reiss had been working from home after learning his young twins had been exposed to COVID. He, his wife and their children all had tested negative.

Because of the timing and his children’s negative tests, Reiss says it appear he was infected elsewhere. Reiss wore a mask and a face shield at the VA hospital press conference.

Mounds said only staff with private offices have been at the Capitol daily. Others have come in on a staggered schedule. Mounds and Geballe visited the Captiol on Monday, but only to drop off their test swabs. 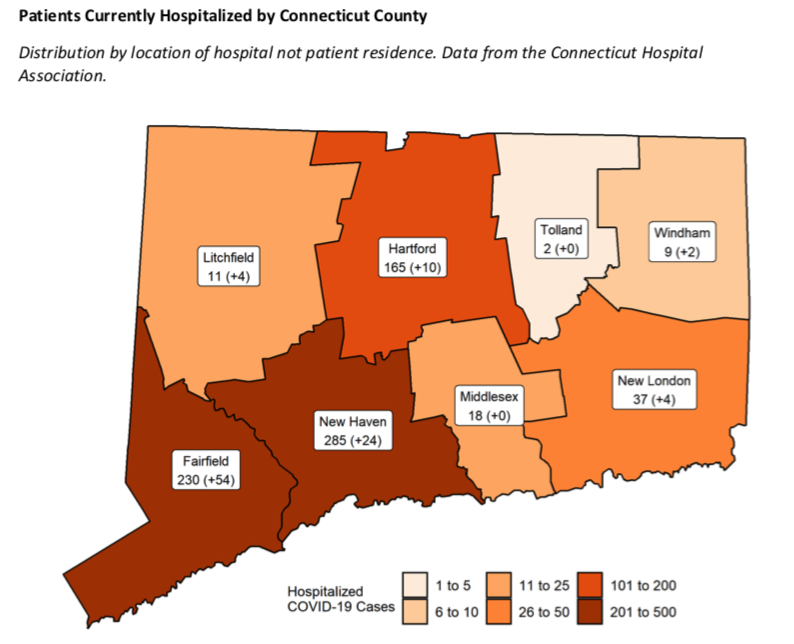 The news Monday was not good. Lamont said the consensus on a conference call with other governors was that Thanksgiving, with its mass migration of college students to their homes, was “a period of great risk.”

Students are urged to test for COVID before returning home.

Lamont said Connecticut was expected to record its 100,000th case by week’s end, but the governor gave no indication that he was considering a further tightening of commerce or public schools, though his administration would be offering school systems further “guidance.”

The positive test rate was a leading indicator of hospitalizations sure to follow: On Monday, 757 patients were hospitalized with COVID in Connecticut, the highest census since mid-May, though well below the peak of 2,000 patients in the spring.

Connecticut’s positivity rate — its seven-day rolling average is 5.6% — is alarming, even if it pales in comparison with Pennsylvania and South Dakota, with rates of 20% and 58%, respectively.

“We continue to do a ton of tests, probably more tests than just about any state in the country,” Lamont said.

A guest at his briefing was Dr. Marcella Nunez-Smith, the physician and Yale epidemiology professor who serves as co-chair of President-elect Joe Biden’s coronavirus task force. Like the rest of the Biden transition team, the task force has been shut out by the  Trump administration, even the career public health professionals, she said.

“I think it’s important to note that the work of the transition is driven by the data, by evidence, by science. We know that there will be differential impacts on front-line and essential workers as we dial up and dial down on openings,” said Nunez-Smith, an expert in health care disparities.

She said she was optimistic that the task force eventually would be briefed by the Trump administration.

“But so far we have not had an opportunity to talk to … even the career folks in the administration who have really valuable information and insights,” she said.

Nunez-Smith urged everyone to hew to “first principles” on combatting COVID — wearing masks and socializing only in a small bubble. Those precautions were necessary to preserve a health care system populated by fatigued doctors, nurses, respiratory therapists and others, she said.

She called them “a precious resource.”

Lamont announced that 600,000 residents of Connecticut already have downloaded an anonymous tracing app since it was made available Thursday, a number that exceeds the critical mass necessary for the tool to be useful.  The app is free and can be obtained on the state’s web site.

Geballe said senior staff got a real-time test over the weekend when they were alerted to having been exposed and given instructions on what to do. The alert did not reveal who had been infected, but the timing told them it was their colleague, Max Reiss.