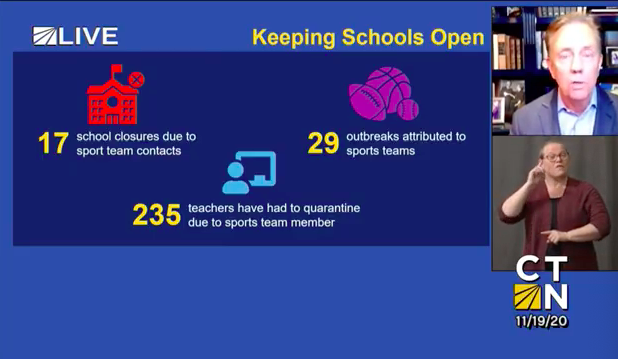 Gov. Ned Lamont made the case to suspend high school, rec league and club sports at his briefing Thursday as a way to keep schools open.

High school and recreational sports leagues will suspend Monday and remain inactive until Jan. 19, a consequence of COVID-19 outbreaks being traced to athletics as Connecticut confronts a spate of new cases, hospitalizations and fatalities, Gov. Ned Lamont said Thursday.

Connecticut reported 21 COVID-19 fatalities, an alarming one-day spike that raised the state’s death toll to 4,805 since the novel coronavirus was first detected here in March. Nearly 6.5% of the 36,339 daily tests were positive, yielding 2,353 new cases.

“Disturbing numbers here, but continuing a trend,” Lamont said. “We continue to creep up.”

Hospitalizations for COVID reached 840, equaling close to 10% of the state’s 8,800 staffed hospital beds. Lamont said the hospitals still have significant capacity and there currently is no need for emergency measures such as constructing mobile field hospitals.

Lamont, who is in quarantine due to positive tests by a senior aide and a state trooper assigned to his security detail, delivered his twice-a-week COVID briefing via Zoom from his home in Greenwich.

In response to questions, the governor continued to insist that broader closures of commercial life are not necessary, saying he would be guided by data collected as the state tracks and traces the latest surge.

“Many, many, many of the infections are related to sports,” Lamont said.

School athletics have been implicated in 17 school closures, 29 outbreaks and exposure of 235 teachers to the coronavirus, forcing them from the classroom into quarantine.

The Connecticut Interscholastic Athletic Conference voted two days ago to postpone the start of winter sports until Jan. 19, and Lamont said club sports and recreational leagues must cease on Monday.

“We’ve just seen too many infections in and around those winter sports, not necessarily on the ice, but everything up to the ice — travel there, locker rooms and the such. There, we have to err on the side of public health,” Lamont said. “And this is the best way we can keep your schools open a little bit longer.”

Unaffected are collegiate and professional sports, where the athletes can better isolate, he said.

Earlier on Thursday, Lamont assured the Connecticut Retail Merchants Association that he had no plans to further restrict retail operations, but he asked merchants to strictly enforce public-health rules, such as limiting capacity, requiring masks and ensuring social distancing in checkout lines.

“I just really urge you to be strict,” Lamont said.

The governor also urged but did not order a limit on visits to nursing homes.

Nearly 60% of the state’s nursing homes have recorded at least one case of COVID-19 among residents or staff during the last two weeks, officials said Thursday, and plans are being made to test every resident in those facilities after the Thanksgiving holiday weekend.

The department’s response to violations had been more educational than punitive over the summer.

“Now, as things are getting worse … we realize we need to step it up to the next level and really take more aggressive action and send a message that these rules are serious, and we need to be following them,” Seagull said.

The state currently ranks 27th among all states in new cases over the past seven days, as measured on a per-capita basis, according to the Centers for Disease Control and Prevention. Connecticut had 49.1 cases per 100,000, compared to 49.7 in the U.S.

But Lamont likened an outbreak in the upper Midwest to a “dark cloud” ranging from Montana to the Great Lakes that may yet drift eastward. The per-capita rates in those states range as high as 161.5 per 100,000 in South Dakota and 177.4 in North Dakota. The highest in the northeast is 82.9 in Rhode Island.

Connecticut is fourth in per-capita COVID deaths behind New Jersey, New York and Massachusetts and ahead of Louisiana, Rhode Island, Mississippi and North Dakota. 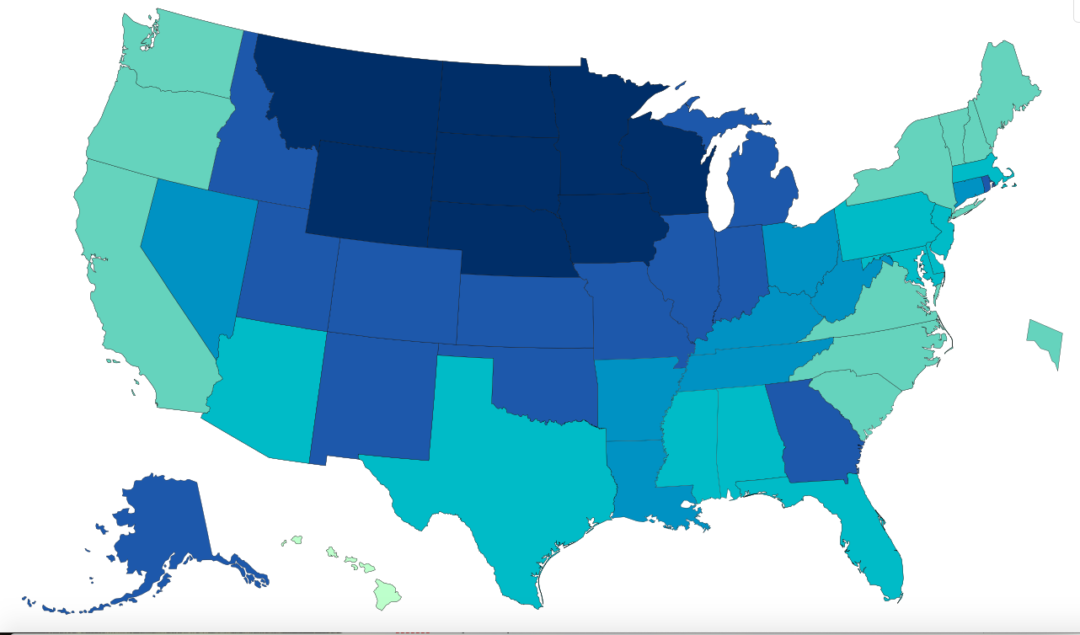 Gov. Ned Lamont likened the high rate of recent COVID cases in the upper Midwest to a “dark cloud.” The darkest color signified new cases over the past seven days ranging from 114.5 to 177.4 per 100,000 residents.