Lamont’s press deputy has COVID, but governor is not in quarantine 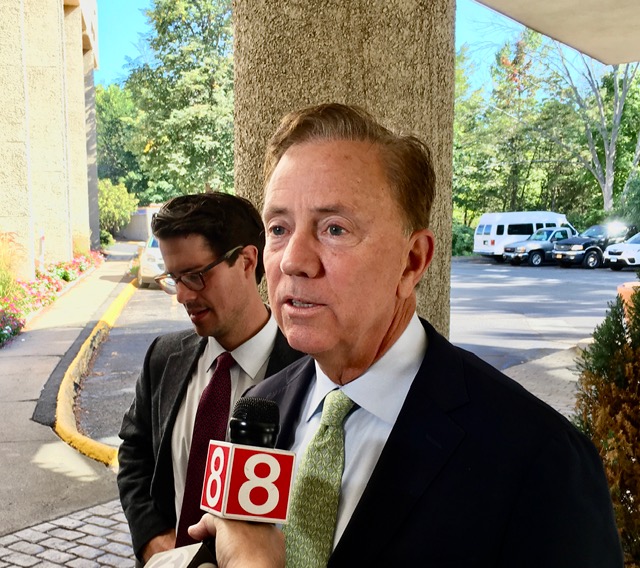 Rob Blanchard is the press deputy often seen over the governor’s shoulder, as in this pre-COVID photo.

Gov. Ned Lamont’s deputy press secretary, Rob Blanchard of Middletown, said Sunday he is in quarantine with COVID-19 symptoms after getting a positive test result early Saturday and again Sunday.

The governor, who quarantined at home for two weeks after his press secretary, Max Reiss, tested positive without ever showing symptoms, is not in quarantine. The standard for a precautionary quarantine is being within six feet an infected person for at least 15 minutes.

Blanchard said in a telephone interview Sunday he has not been within six feet of Lamont since the governor returned to the Capitol on Monday at the end of his quarantine.

Safety protocols in the governor’s office limit access to the governor, with chairs kept at a distance during meetings, said Paul Mounds, the governor’s chief of staff. He said they are assessing if other staff must be quarantined.

With a few exceptions, Mounds said, the governor’s staff has been working remotely, meeting primarily using video conferencing. The State Capitol has been closed to the public since mid-March.

Lamont, Lt. Gov. Susan Bysiewicz and their staffs are tested twice a week, usually on Monday and Thursday. Blanchard’s test from Monday was negative. He was informed electronically shortly after midnight Friday that his Thursday test was positive.

Blanchard, 32, who tries to run daily, worked from home on Friday. He ran 6½ miles, despite feeling fatigued, but he awoke Saturday with more symptoms, including a deeper fatigue, flu-like aches and the sensation someone was sitting on his chest.

Blanchard is one of nearly 128,000 Connecticut residents to test positive for COVID-19 since March. Like most of Connecticut, Blanchard’s hometown of Middletown is in the COVID red zone: 160 of the state’s 169 cities and towns with a per-capita COVID-19 caseload of at least 15 per 100,000 residents. Middletown’s current rate is 53.6.

In addition to working on the governor’s staff, Blanchard is politically active in Middletown. He is the former Democratic chair and currently is chair of the city’s Charter Revision Commission.

Mounds announced Saturday night that a member of Lamont’s staff had tested positive. Blanchard identified himself as the positive on Twitter on Sunday.

My statement regarding a recent positive test for #COVID19: pic.twitter.com/kh4K39ilwW