In a deadly month, the COVID vaccine reaches Connecticut 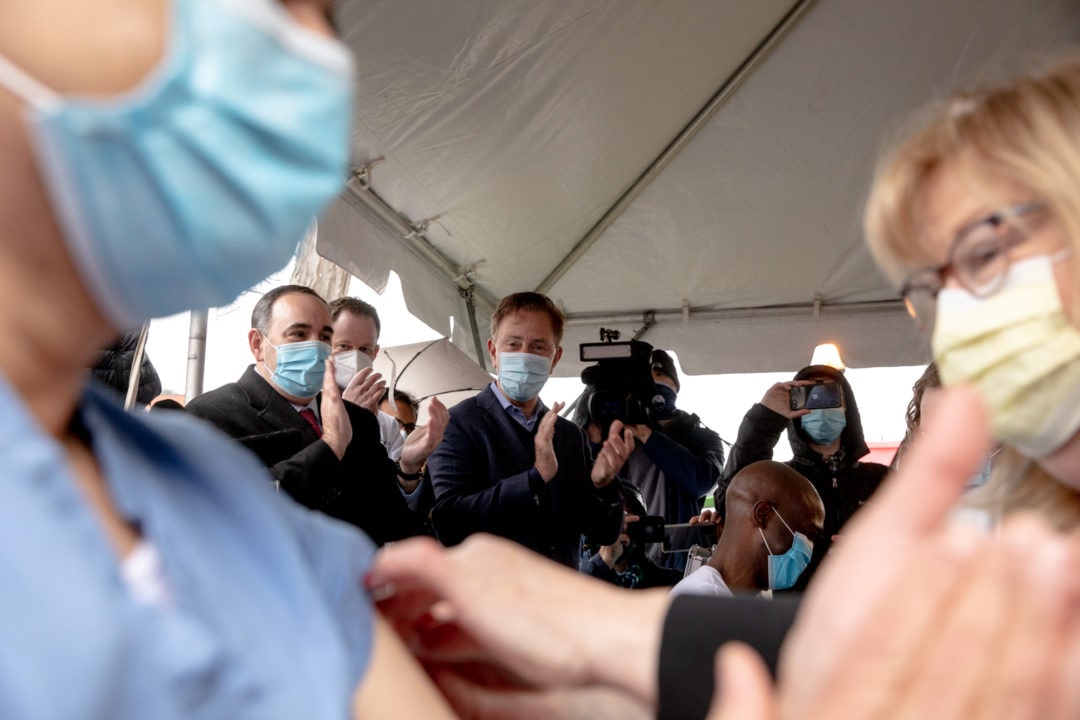 Under a canopy in a sleeting rain outside Hartford Hospital, a nurse injected Dr. Ajay Kumar with the first dose of the COVID-19 vaccine in Connecticut, a scene replicated throughout the United States on Monday.

The injection was likened to a moonshot, a scientific leap forward that Kumar and others say signals the beginning of the end of a resurgent epidemic that is killing thousands of Americans every day, twice exceeding the losses of Sept. 11, 2001.

Photographers kneeled in a tight circle at Kumar’s feet as Marylou Oshana raised a needle to the physician’s upper left arm. A fusillade of clicking cameras signaled the successful administration of the Pfizer-BioNTech vaccine.

“That’s it!” exulted Gov. Ned Lamont, who stood watching with nurses and doctors, a few shivering in white medical coats. “A new day. Help is on the way.”

Connecticut has recorded 343 deaths and 28,007 new infections since the first of December, a month that promises to be among the deadliest in the United States since the first cases were confirmed nine months ago. The U.S. death toll was certain to pass 300,000 Monday; in Connecticut, more than 5,400.

The first vaccinations were choreographed for maximum exposure, an element of a campaign to build public confidence in a quickly developed vaccine granted an emergency use authorization over the weekend by the Food and Drug Administration.

Kumar is the chief clinical officer and executive vice president of Hartford HealthCare, the system that operates Hartford Hospital and six other acute-care hospitals in Connecticut. The second recipient was Keith Grant, an advanced practice nurse and director of infection prevention. Thirteen others followed.

“I want to be the first one to take it to make sure folks know that it is safe and it’s the prudent thing to do,” Kumar said before he sat down for his injection.

Before rolling up his sleeve for an inoculation, Troy urged that everyone get a vaccination when their turn comes.

“This is about doing the right thing for the safety and health of your friends, of your family, your neighbors, your coworkers and your classmates,” Troy said, “The more rapidly we work together to get this vaccine into us, the more rapidly we can began to quickly change the narrative on COVID and get our state back.”

Hartford Hospital was one of 145 hospitals, clinics and public health systems slated to receive the first doses of the vaccine developed by Pfizer, which has a research facility in Connecticut, and its German partner, BioNTech. The initial shipments contained 1,950 doses.

The doses shipped Sunday from a Pfizer facility in Portage, Mich., was expected to come to Hartford via a cold-storage facility UPS established in Louisville, Ky., as the eastern hub of a hastily assembled system to distribute a vaccine that must be stored at minus 70 degrees Celsius.

UPS was tasked with distribution in the east, FedEx in the west.

The arrival of the vaccine in Connecticut was anticlimactic. Expected by UPS at 10, it arrived unexpectedly at Hartford Hospital at 8:30 a.m. by FedEx on the day’s first truck. Eric Arlia, the head of pharmacy, got a call: “It’s here.”

“We were told by the federal government when it was coming and how to expect it,” said Jeffrey Flaks, the president and chief executive officer of Hartford HealthCare. “We were so thrilled it was coming, we didn’t ask questions.”

With the press and first vaccine recipients watching, Arlia reconstituted the vaccine for use by injecting a precise amount of a saline solution into the vial, then repeatedly turning it over to mix.

“All right,” he said, holding the first vial. “This vial is ready.” 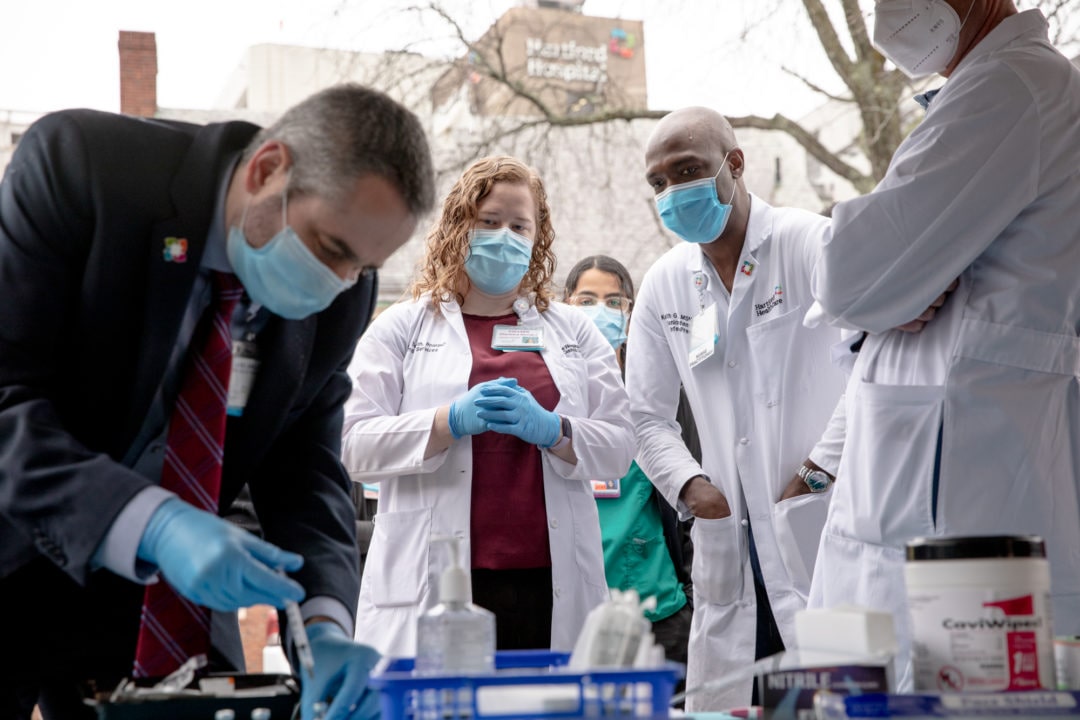 The protocol calls for each recipient to be observed for 15 minutes, a precaution against an allergic reaction. Kumar assured bystanders he felt fine.

“Here is your vaccine card,” said Oshana, the nurse who administered the shot. “And don’t forget to make your appointment.”

The syringe used on Kumar and the first of the three vials used Monday were set aside. They will be preserved in Hartford Hospital’s archive, Flaks said.

“In my career, this is among the most amazing days I’ve ever experienced. I see what happens inside this building and see the tremendous trauma we’re working through with this virus,” Flaks said. “To have hope, it’s the dawn of a new day — to give people now the opportunity to protect them.”

Flaks said the vaccine arrived nine months and one day after Hartford Hospital admitted its first COVID patients, an accomplishment he called “beyond description.”

Whether elected officials should set the same example as medical staff by getting vaccinated immediately has proven more complicated.

“People working in the White House should receive the vaccine somewhat later in the program, unless specifically necessary,” Trump said in a tweet. “I have asked that this adjustment be made. I am not scheduled to take the vaccine, but look forward to doing so at the appropriate time.”

Trump has antibodies after getting COVID in October. The Centers for Disease Control and Prevention recommends that people who had COVID still get vaccinated, while waiting 90 days after their infection. Hartford Hospital officials said they will be vaccinating personnel who had the infection.

The vaccine will be offered in two phases in Connecticut, based on risk factors.

In Phase 1A, the vaccine will be limited to front-line medical providers, nursing home residents and first responders, to be followed in 1B by other critical care workers, high-risk individuals and persons over age 65. Phase 2 for everyone else is expected this summer.

Lamont said he is willing to be publicly vaccinated to promote its safety and efficacy, but he is wary of jumping the line.

“I’ve talked to some of the other governors,” said Lamont, who has had to quarantine after cases on his staff. “We’d like to lead by example, show that it’s the safe thing to do, an effective thing to do. And that makes a lot of sense.”

At age 66, he is eligible in Phase 1B, and he is inclined to wait his turn. But he said if the CDC urges governors to get vaccinated early to set an example, he would not hesitate.

“I’ll be here this afternoon,” he said. 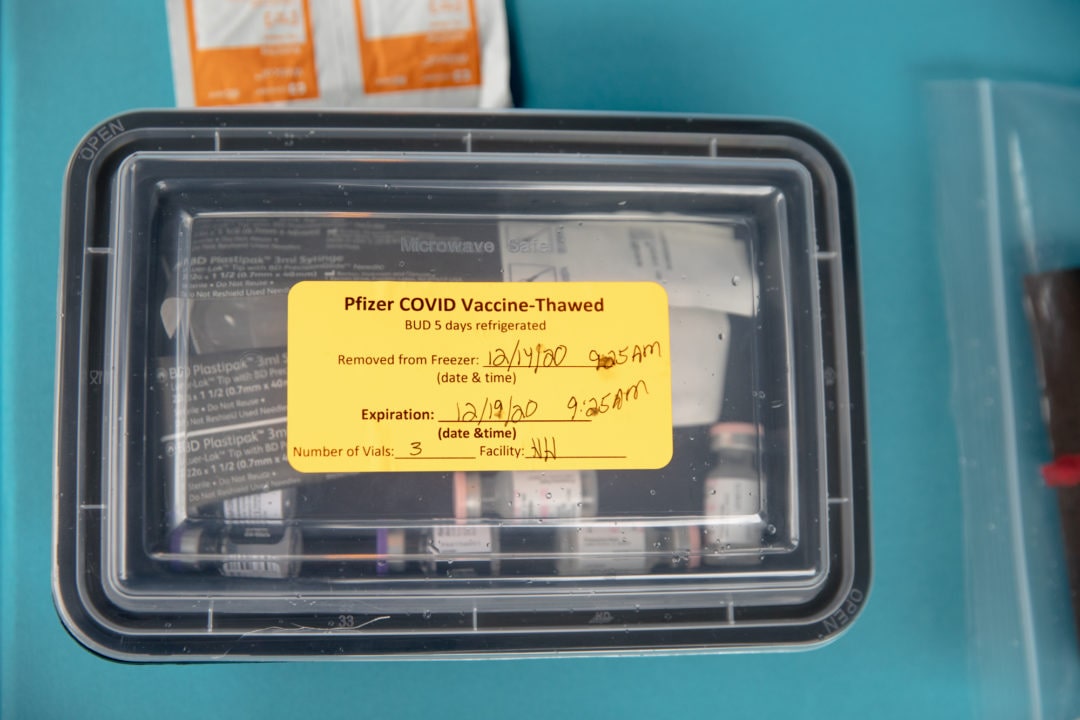 The Pfizer BioNTech COVID-19 vaccine bottles sit on the desk before the distribution starts.