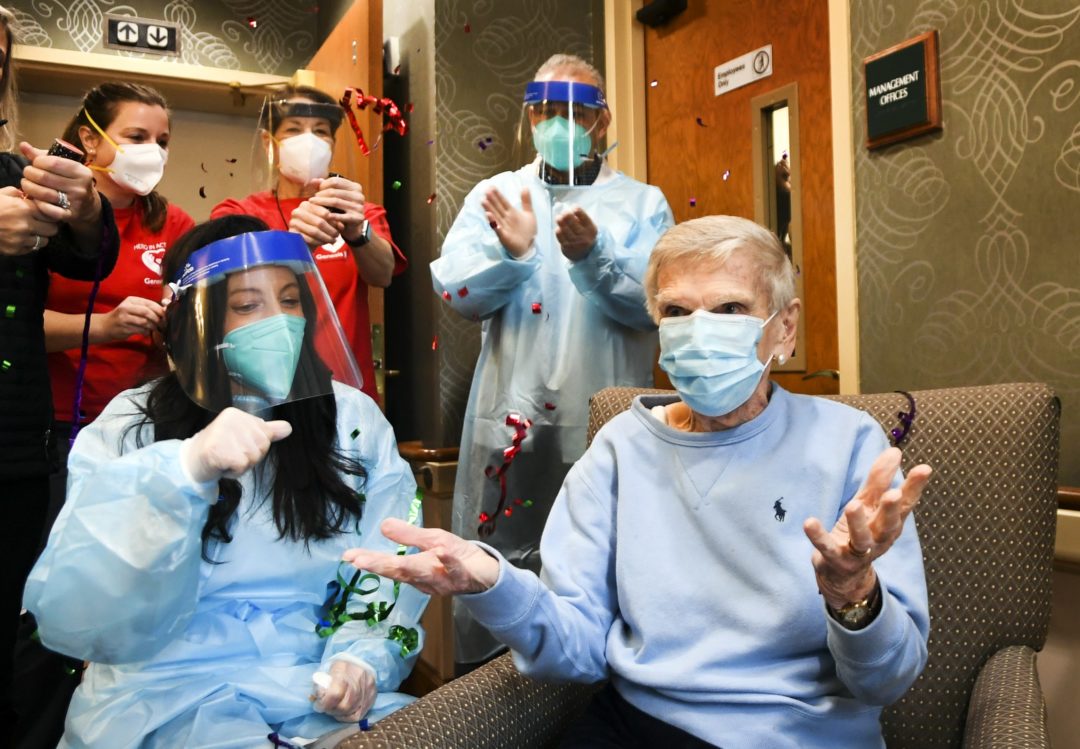 Jeanne Peters, 95, a rehab patient at The Reservoir, a nursing facility, was given the first COVID-19 vaccination in a Connecticut nursing home Friday, Dec. 18, 2020, in West Hartford. Administering the vaccine is Mary Lou Galushko, a CVS pharmacist from North Haven, left. Staff members showered her with confetti after. At rear is Bob Atighechi, a CVS pharmacist from Rocky Hill. (AP Photo/Stephen Dunn)

Genesis HealthCare, the largest publicly traded nursing home company in the United States, invited the press to watch its chief medical officer and others be vaccinated Friday against a novel coronavirus that poses an existential threat to the company.

The first COVID-19 vaccination at a Connecticut nursing home went to Dr. Richard Feifer. A CVS vaccinator inoculated Feifer as he sat outside The Reservoir, one of the 360 facilities operated in 25 states by the struggling Genesis HealthCare.

“This is all about leadership. The only way out of this pandemic — not just for nursing homes, but for society — is through mass vaccination,” said Feifer, who is also the executive vice president of Genesis. “And the faster we can get there, the better.”

More than 3,000 of the 5,581 deaths from COVID-19 in Connecticut have occurred in skilled nursing homes. Including assisted living facilities, the number is close to 4,000. Nationally, about one third of the 305,000 COVID-19 deaths have been in long-term care facilities.

Genesis has been among the most aggressive in publicizing the availability of COVID-19 vaccinations. Among the owners of the five nursing homes getting the first vaccines in Connecticut, it was the only one to disclose that it had received them.

COVID has threatened the company’s financial viability, according to filings with the Securities and Exchange Commission. It reported a negative cash flow for the first nine months of the year, and its COVID-related expenses exceed $250 million.

Its stock traded at $1.77 in February, then lost half its value in March as the coronavirus spread throughout nursing homes. It closed at 52 cents Thursday, less than one-third of the pre-pandemic price. 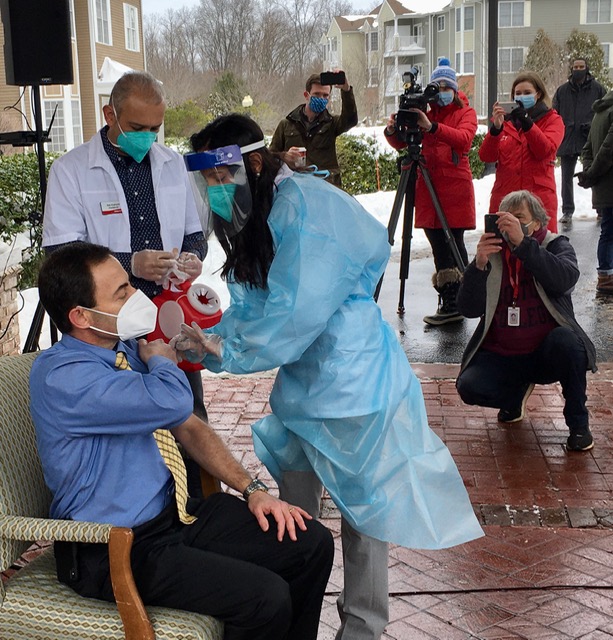 The press records Dr. Richard Feifer getting vaccinated outside The Reservoir, a nursing home in West Hartford.

With a share price of less than $1 for 30 consecutive trading days, Genesis faces being delisted by the New York Stock Exchange. The exchange notified Genesis of non-compliance with the $1 requirement in April, setting a deadline of Dec. 26 for compliance.

Feifer said the publicizing the availability of the vaccine is about health, not finance.

Six residents have died of COVID-19 at The Reservoir, a 75-bed facility. The other 16 facilities owned by Genesis in Connecticut include Kimberly Hall North and South, a two-building campus in Windsor where 61 people died in the early months of the pandemic.

“Our residents have suffered greatly,” Feifer said. “And our staff have felt the strain and the stress and caring for residents during this pandemic and also taking care of themselves and their families, and some have gotten sick themselves. But these vials of hope have arrived. Today is a historic day.”

Occupancy has dropped at most nursing homes during the pandemic. Only 38 of the 75 beds at The Reservoir are occupied, but the vacancies are not all attributed to COVID. Marnie Talamona, the company’s regional vice president of operations, said some of the rooms are being renovated after a water leak in October.

Feifer was joined outside the home by Jonathan Roberts, the chief operating officer of CVS Health, whose company administered the vaccine.

“This is an important day for our country, for our state — and most importantly, for the residents of these long term care facilities. They’re the most vulnerable part of our country, and they’ve been the most isolated,” Roberts said.

CVS and Walgreens are supplying the vaccine to nursing homes in Connecticut.

Connecticut received the 31,600 doses of the Pfizer-BioNTech vaccine promised this week, but the state now has been told to expect 86,000 doses next week, not the 98,000 expected from Pfizer and a second supplier, Moderna.

The mood at The Reservoir was festive. Confetti was tossed inside as Jeanne Peters, 95, was vaccinated in an entry foyer. Vaccinators wore face shields, masks, gloves and sterile gowns.

“This is a remarkable and a joyful day in Connecticut,” said Dr. Deidre Gifford, the acting commissioner of public health. “Over the past nine months, our nursing home residents, families and staffs have been devastated by this virus. Sadly, we have lost over 3,000 residents of nursing homes to COVID-19 in Connecticut. That’s 3,000 grandmothers, grandfathers, sisters, brothers, friends and beloved colleagues.”

Gov. Ned Lamont said nursing homes have done better during the latest surge, but the crisis is not over.

“There’s no victory lap,” he said.

Feifer said Genesis, like other health care providers, believes it is important to show vaccinations to encourage utilization when they are more broadly available. Vaccinations will be initially limited to medical workers, first responders and persons who are older than 65 or have other risk factors.

“So we raised our hand first and said, ‘Let’s go. Let’s get rolling. Let’s do it publicly. Let’s make sure that everyone can see that we are not afraid, we believe in the science, we believe in the approval process.’ We need to make sure everyone rallies around that as well,” Feifer said.

Sophia Walker, a registered nurse, was one of the other staff members to be publicly vaccinated. Walker, who is Black, noted the skepticism about the vaccine among some members of the minority community.

“I know I’m setting a great example for the Black community,” Walker said. “I’m happy to be an example.”

All but one of the 38 residents consented to getting the vaccine, and 50 staff members and vendors were being vaccinated, about half the staff. Officials said most of those not being vaccinated Friday were unavailable, not unwilling.