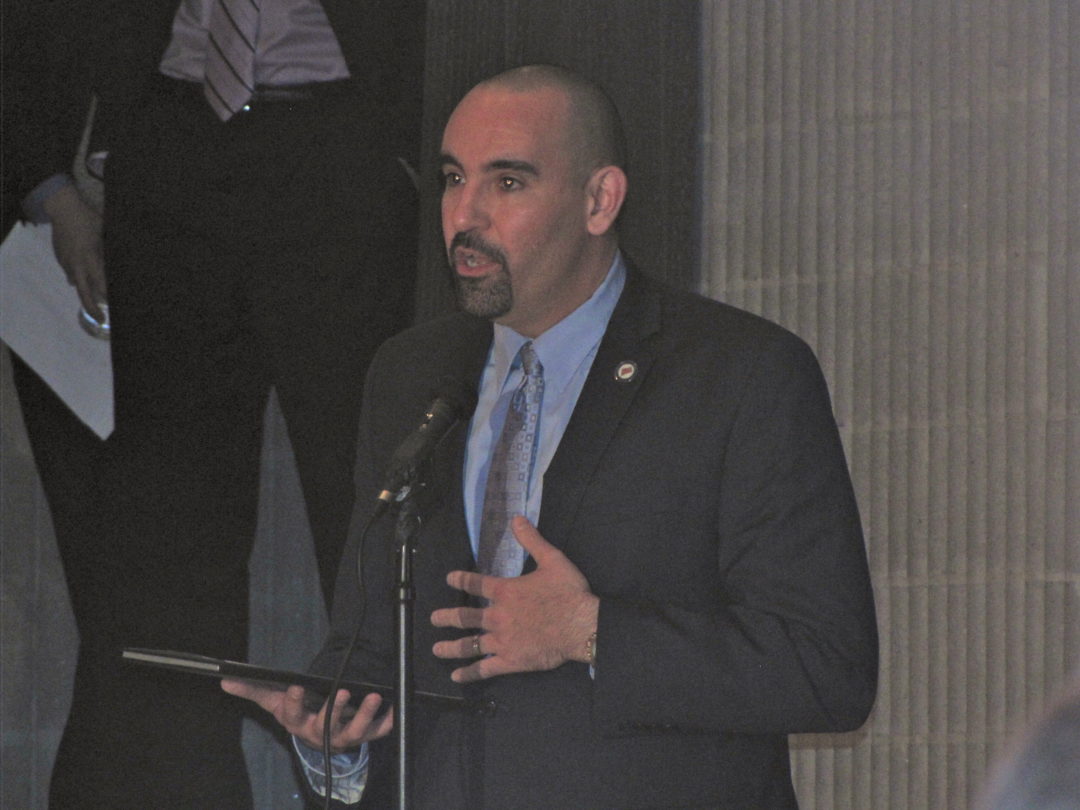 David Bosso of Berlin High School was teacher of the year in 2012.

After David Bosso saw news of the riot in Washington, D.C., unfold Wednesday, he started thinking about how he would approach the issue with the students in his high school social studies class Thursday.

“One of the things we want to do is get them ready for the world,” he said. “This is something that has to be addressed and taken seriously.”

Educators around Connecticut and the country had to abruptly reassess their classes after a mob of President Donald Trump’s supporters ransacked the nation’s Capitol Wednesday.

Teachers said some of what they had to figure out was how to answer the big questions about the rioting.

In the world history class Bosso teaches to freshmen at Berlin High School, students had questions like “Why is this happening?” and “How did we get to this point?” or they talked about the discrepancy in the police response to the U.S. Capitol on Wednesday and to the Black Lives Matter movement.

He explained that one of the most important things educators can do is create space for students to feel safe and welcome to share their perspectives. He said students also need to have a good understanding of where teachers stand — that teachers can be objective when it comes to politics, but not when it comes to humanity and decency.

“There are certain decisions about how much do we sanitize and how much do we whitewash things,” Bosso said. “In a social studies class, in particular … to some extent, we have an obligation to make people aware of the truth, and a lot of the truth is ugly. We shy away from it, I don’t know if we’re doing right by our students.”

He said he wants his students to understand not only the significance of the situation but also to think about how the riot will be looked upon historically.

That is one of the reasons why Great Path Academy social studies teacher David McMullen wanted his 10th-grade students to write down their thoughts and feelings about what happened.

“I say to them often that you are the future’s primary sources, on top of being our future leaders,” he said. “But like 100 years from now or 200 years from now, somebody might be reading what you wrote down — your feelings, your thoughts, your reflections — and then you might end up in the textbook too.”

McMullen said he didn’t know how he was going to integrate the rioting into his class academically, but still knew they needed to have the conversation.

He said one student talked about how their parent was scared to send them to school on the bus. Others brought up how they were scared, nervous and even numb to what they were seeing on TV and social media.

“I think the general consensus that the students are feeling is that they’re just very numb to it all and that it just doesn’t feel like it’s real at times,” McMullen said. “It just leaves them feeling very confused about where we’re going as a society. That’s their general feeling.”

For some educators of younger students, the conversations are different.

At Poquonock School in Windsor, kindergarten teacher and the state’s 2021 Teacher of the Year Rochelle Brown said having one of her students come up to her and ask “Miss Brown, did you see all the crazy things that have been happening on the news?” was not how she wanted to start the first day of in-person learning since returning from the winter break. But she added that it was a necessary conversation for them to have.

“I think even for 4- and 5-year-olds, when they see things, they have this need to talk about them,” Brown said. “And for me, as their teacher, I just wanted to be just as open and honest with them, as I could in a way that they would be able to understand it.”

She said after the one student asked if she had seen the news, that led to other students saying they also saw what happened.

Brown said she explained that even adults don’t make the best choices or have the best of hearts. When they asked her why, she told them sometimes people are afraid of things they don’t know or understand, and of differences.

“I didn’t want to make it too heavy for them,” Brown said. “I think that they felt better, and one of them said, ‘I’m so glad that you’re my teacher and you don’t feel differently about me because I’m not the same color as you.’ I think in their own way, they do understand what’s going on — they are taking it in and, to me, it’s just absolutely heartbreaking to have a conversation like this with a 4- or 5-year-old.”

U.S. Sen. Chris Murphy, D-Conn., who is the father of two sons, was asked on a Zoom news conference call on Thursday what parents should tell their kids about Wednesday’s riot.

“I have to confront that question as well as a parent, you know?” he said. “My third grader spent this morning talking virtually with his class about what happened last night. The teacher felt the need to spend the first hour addressing kids’ concerns. And obviously, my children spent yesterday wondering where their father was through all of this. They knew I was safe.

“But I think we have an obligation to keep democracy going and moving and do it in a very publicly visible way so that we can show everyone in this country, adults and kids together, that you can’t beat us with these thuggish acts. And so, in a way, all of this happening, right on the precipice of the most important moment of American democracy, the inauguration of a new president, gives us the opportunity to show that we’re not going away. American democracy is still here.”