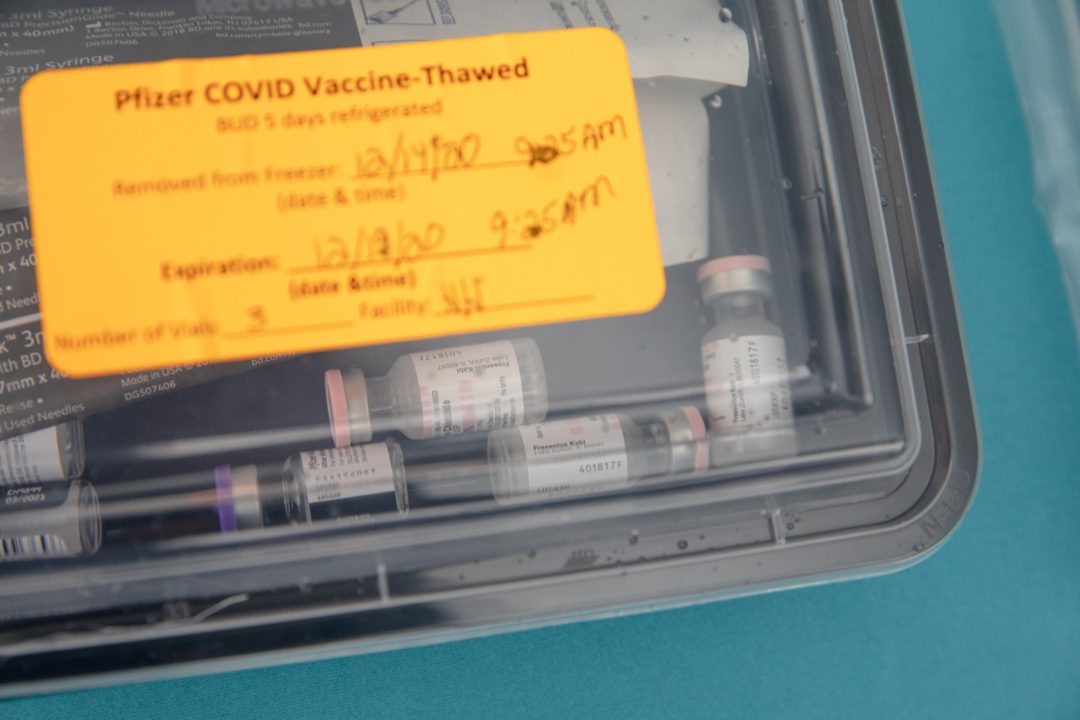 Nursing home residents have received the COVID-19 vaccination at a higher rate than their caretakers during the first round of vaccinations – a troubling trend for state officials and providers who are hoping additional employees will get vaccinated during the second round now underway.

As of Jan. 14, a total of 13,965 nursing home residents have received a vaccination, compared to 13,275 nursing home employees, according to state Department of Public Health data.

The number of nursing home residents and workers can fluctuate daily, but as of Dec. 31 the state estimated there were about 17,000 people living in nursing homes — meaning up to 82 percent of residents have received a vaccination so far. State officials and long-term care providers estimate there are about 26,000 nursing home employees, putting their vaccination rate at barely 50 percent.

Nursing home residents were among the first to get inoculated in the state and country because of the devastating impact the virus has had on that population. In Connecticut, nearly 70 percent of the state’s COVID-19 deaths have occurred in long-term care facilities.

That’s why there was much fanfare when CVS vaccinators showed up at The Reservoir in West Hartford in mid-December to administer the first shots for nursing home residents in the state. But when the photo opportunities were over, only about half of the staff got vaccinated that day, according to Genesis Health Care spokeswoman Lori Mayer.

The numbers weren’t much better at other facilities that were among the first to be vaccinated. At Apple Rehab in Middletown, for example, only about 40 percent of the staff was vaccinated in the first round, and at the Cherry Brook Senior Center in Canton, about 50 percent took the vaccine, facility officials said.

Providers and officials with District 1199 SEIU, the state’s largest health care workers union, attributed the reluctance to a variety of issues – from women unsure about long-term fertility issues to uncertainty about the vaccine’s side effects to minority workers wary of a health care system that has discriminated against people of color.

Nursing home provider Paul Liistro, who owns two facilities in Manchester and Vernon, said the low percentage of staff getting shots would make it difficult to achieve herd immunity until workers who didn’t get vaccinated catch the virus. But the new variants of the virus now spreading make that plan dangerous.

“So, what is going to happen now is that in a few weeks [10 days after administration of the second dose], the residents will be amply protected,” Liistro said. “But the staff, on the other hand, will continue to shed and spread the virus … to each other.”

To avoid that, DPH officials, providers and the union have been trying to reach out to employees and educate them to get vaccinated.

At Apple Rehabilitation centers, the medical directors have held Zoom calls with workers and met with them individually to discuss their concerns, Apple Vice President Karen Donorfio said. They also have tried to educate them on the side effects and efficacy of the vaccines.

Apple’s Middletown facility had eight additional staff members receive the first dose last week when CVS vaccinators returned for a second time. Donorfio said about 50 percent of the staff there has now been vaccinated.

Genesis has fared even better at its West Hartford facility, as now nearly 70 percent of its staff has been vaccinated after the second round.

“Some staff members were waiting until the second clinic as they wanted to see how their peers responded to the vaccine in round one. They simply didn’t want to go first,” Genesis Chief Medical Officer Dr. Richard Feifer said.

“The Reservoir’s clinic was one of the first in the country. Many wanted to learn more before making a decision, and our clinicians and medical professionals have spoken with employees personally to answer any questions they may have had.”

At Cherry Brook in Canton, about 20 additional staff members got vaccinated in the second round, bringing its percentage up to about 65 percent, according to Athena’s director of marketing, Timothy Brown.

Brown said many of the new staffers who got vaccinated did so after “seeing how the guinea pigs” had done.

“We now have actual evidence of people who took the vaccine the first time and are fine, and that’s the biggest incentive for people,” Brown said.

At a recent press conference, the state’s Chief Operating Officer Josh Geballe said officials have been frustrated trying to get more data on who has been vaccinated in nursing homes by CVS and Walgreens personnel.

The two companies were hired by federal authorities to vaccinate all nursing home residents and staff across the country. The state has had little to do with the process other than to distribute the vaccine.

“We are expecting to get that split out from from CVS and Walgreens through the federal systems. We don’t have it yet,” Geballe said, adding all the state has gotten so far is the total numbers.

Geballe added that anecdotally the state believes about 40% to 50% of nursing home staff was vaccinated the first time and that there has been an uptick in the second round.

Even with the increase, the numbers are still far far short of the residents’ participation in the program. Officials estimate that more than 90 percent of the people living in nursing homes will be vaccinated by the time the three rounds of shots are complete.

They acknowledge the staff percentage won’t get that high without making the vaccine mandatory, which many providers are reluctant to do because they already have staff shortages and can’t afford to have people quit.

“We’ve been happy to see that some of the second opportunities have been taken up by employees. We expect for it to climb a little bit higher, but it’s still not going to be as high as the resident population,” said David Skoczulek, vice president of business development for the iCare Health Network, which owns 11 nursing homes in Connecticut.

Leaders at iCare are debating what procedures unvaccinated workers should have to follow in the long term. The company is also considering whether to make the vaccine a requirement for its employees.

“We’ve been very careful to not rule out the idea of it being mandatory. That would obviously have to be something that was legally available to us,” Skoczulek said. “But if it was, we would not rule it out. We want to keep everything on the table.”

iCare is also weighing how to deploy staff depending on whether they are inoculated.

“If a staff member has not had a vaccine, what unit should they work on and in what capacity, using what PPE?” Skoczulek said. “We expect that if you’re not vaccinated, it’s going to be a more tightly regulated environment with more PPE. Obviously, the ideal scenario would be to have high levels of vaccination.”