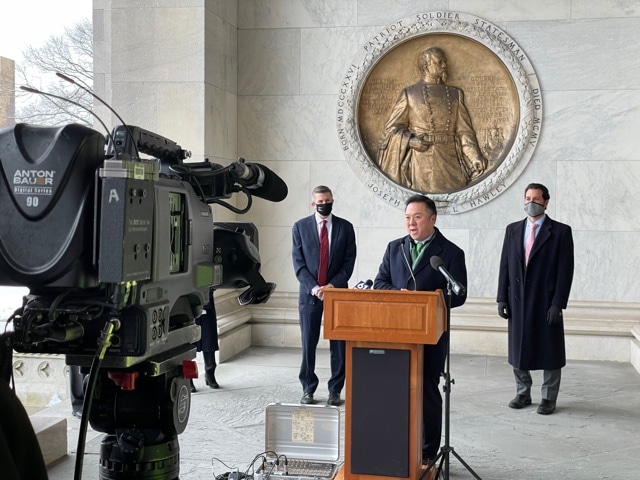 Attorney General William Tong outside the Capitol with Sen. James Maroney, left and Rep. Michael D’Agostino, co-chairs of a committee that will hold a hearing Thursday on a price-gouging bill sought by Tong.

When demand soared for N-95 masks and nitrile gloves last year, so did prices. Hartford HealthCare, the owner of seven acute-care hospitals, saw a seven-fold jump in spending on personal protective equipment, from about $400,000 to $3 million.

Were suppliers simply obeying the laws of supply and demand, or were they committing price gouging in the midst of a pandemic?

Attorney General William Tong and legislators said Wednesday that Connecticut’s existing anti-profiteering law made it difficult to say, a problem they hope to resolve with legislation up for a public hearing Thursday before the General Law Committee.

Tong said his office investigated about 750 complaints of price gouging relating to the COVID-19 pandemic, which created an overnight demand for vast quantities of PPE, the shorthand for personal protective equipment, hand sanitizer and disinfectant cleaners.

“What we discovered, unfortunately, is that our law in Connecticut, our price gouging law, is limited and really only gives us the immediate opportunity to go after the first link in the chain, the retailer,” Tong said.

House Bill 5307 would define price gouging as charging an “unconscionably excessive price” in any area subject to an emergency declaration by the governor or president.

“So what this bill does is enables us to go after everybody who might be responsible for price gouging, including distributors and wholesalers, and to move up the stream of commerce. It also strengthens and clarifies what our law means when it says ‘price gouging,’” Tong said.

The bill has no exact definition of what is excessive.

Instead, it refers to an amount charged by the seller that “represents a gross disparity between the price for which an item was sold, rented or leased” prior to the emergency or an increase “not attributable to additional costs incurred by the seller in connection with the sale, rental or lease of an item.”

Conservative economists long have looked askance at price-gouging laws as an interference with market dynamics. The conservative columnist, Jeff Jacoby, once wrote, “It isn’t gouging to charge what the market will bear. It isn’t greedy or brazen. It’s how goods and services get allocated in a free society.”

But when the goods are potable water in the aftermath of a hurricane or life-saving PPE, some lawmakers say, the ability to pay a profiteer’s price is not a rational or moral way to make those allocations.

“When you have a crisis like this, it brings out the best and the worst in people,” said Rep. Michael D’Agostino, D-Hamden, a lawyer who co-chairs General Law. “And the job of government is to focus those best efforts, like we’re doing with vaccine distribution, but [also] to control and combat those worst impulses.”

A New England trade group that represents convenience stores, gas retailers and their suppliers already has filed written testimony opposing the bill as unnecessary, even while acknowledging episodes of profiteering.

“Despite the pandemic, the marketplace worked,” said Brian P. Moran, the director of government affairs for the group. “Competition also worked, giving customers choices, thereby minimizing those seeking to profiteer. Retailers also helped stem shortages and discouraging hoarding by limiting purchase quantities. A customer also knows a fair or unfair price when they see it, and in a competitive marketplace, they have options to shop elsewhere.”

Moran, who says his association represents 1,700 convenience stores that employ 25,000, said the bill is “unwarranted, unrealistic, highly subjective, and largely ignores supply and demand economic principles with which our local, regional, national and international economy operates.”

D’Agostino and his co-chair, Sen. James Maroney, D-Milford, said the bill sets a reasonable standard, and he expects some lawmakers to push for more aggressive language and harsher penalties.

“What we’ve learned in the shared experience with our attorney general is that Connecticut’s current law is really insufficient to successfully empower his office, to engage in the enforcement necessary to weed out the bad actors in the supply chain,” said Carl Schiessl, the director of regulatory advocacy for the hospitals association. 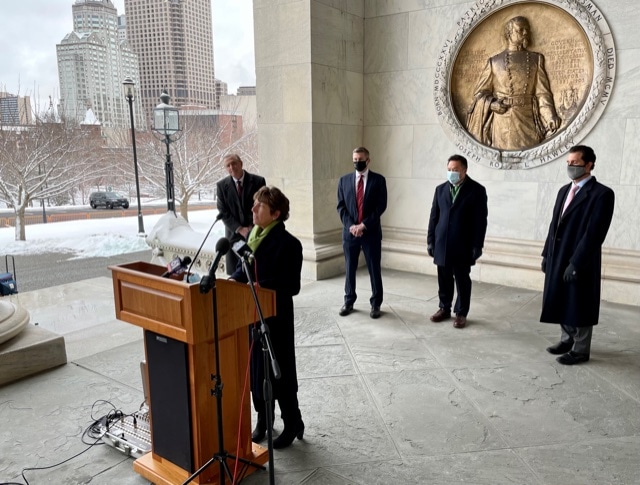 Sharon Fried, who oversees the supply chain for Hartford HealthCare, said her hospitals saw a sevenfold increase in spending on PPE due to COVID-19.

Sharon Fried, the vice president of supply chain management for Hartford HealthCare, said health-care providers were especially vulnerable to gouging, when the protocols for protecting staff against COVID-19 required vast quantities of PPE.

“As always, safety is the most important thing. So we needed to do what we needed to do.” Fried said. “And what we learned is in that immediate period, our demand was so critical, and the suppliers that we work with couldn’t keep up.”

In some cases, new distributors with the right connections bought up supplies then sold them at huge mark-ups.

D’Agostino said the proposed legislation would allow the attorney general, whose jurisdiction is civil, to seek the disgorgement of excessive profits and punitive damages.

“So the message today is very simple. If you’re thinking about price gouging, even if it’s just for a day, or one sale, ‘I’ll make that profit and I’ll get away with it,’ don’t do it,” he said. “The state will find you. The state will catch you. The state will stop you, and you’re going to regret it for a long, long time.”