‘Socially vulnerable’ towns and cities still lag behind in vaccinations for 75-and-older, even as tiny Roxbury nears 100% 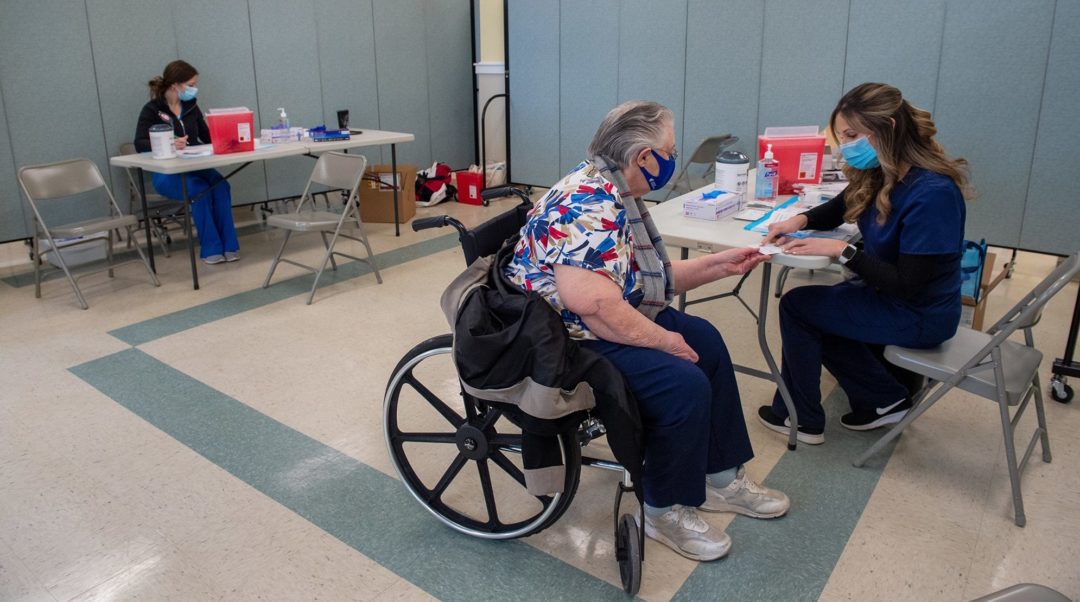 Mikaela Coady, a physician assistant with Priority Urgent Care of Ellington, gives Jane McCarthy, of Manchester, a vaccination record card before giving her the first dose of the Moderna COVID-19 vaccine at a clinic at St. Bernard Church in Vernon Thursday, Jan. 28. The one-day clinic was set up by Priority Urgent Care in partnership with the town of Vernon in an effort to reach out to the community to make it easier for seniors age 75 and over to get the vaccine. They dispensed 100 doses.

A tiny, wealthy Litchfield County town, known to many as the place Marilyn Monroe lived while she was married to playwright Arthur Miller, has vaccinated almost all of its 75-and-older population — by far the highest rate in Connecticut, according to state data.

An analysis of vaccine doses administered in the state during those six days shows that many of the communities that qualify as “socially vulnerable,” according to the Centers for Disease Control — meaning they are most likely to need assistance in a public health emergency — are still lagging behind, while smaller communities such as Roxbury are quickly vaccinating their smaller populations.

During that period, the “socially vulnerable” town with the largest percentage-point increase in shots administered among the 75-and-older age group was Griswold, which saw its percentage go from slightly over 20% to 47%.

Other towns that qualify that had marked increases include Killingly, Groton, Montville and Waterford — all mid-sized communities.

There were five other towns that reached the 80 percent level of vaccinations, but all are smaller towns with few minority residents. At his Monday press conference, Gov. Ned Lamont gave a shoutout to many of them, acknowledging the milestone.

“This is not a competition, but it is worth noting that Oxford and Wilton and Roxbury and Hebron and Essex and Marlborough are champs so far — over 80% of their folks 75 and above have had at least their first vaccination,” Lamont said.

Lamont went on to say they’d be working with some of the communities towards the bottom of the scale – many of them major cities, such as Bridgeport and New Britain.

“We’re going to work with you to help you do better. These are some of the towns that have less than 25%, while the winners are over 80% — New Britain, Winchester, Thomaston, Bridgeport, all at less than 25%,” Lamont said. “So we’re going to help catch up there, make sure this incredibly vulnerable population gets their dose.”

Many bigger cities remain near the bottom even as their numbers are improving.

For example, Bridgeport did nearly 600 vaccinations over the past six days, raising its percentage of 75-and-older residents that have been vaccinated from barely 14% to 23%, according to the data.

Many of the towns that are doing better, whether they are small or large, are ones with active local health departments that are running weekly vaccination clinics.

The state is adding vaccinators almost daily, trying to reach areas that lack coverage, and Lamont said they will be running more mobile clinics to try and reach the city populations — similar to what the state did with COVID-19 testing in the spring.

Roxbury First Selectwoman Barbara Henry is proud that her town tops the list, even if she doesn’t quite agree with the state’s totals that all but one of the 144 elderly residents in her town has gotten vaccinated.

“I don’t know how they came up with that, because I know five people personally who haven’t been vaccinated,” Henry said Tuesday. Any discrepancy between 2010 Census data, which the state uses to estimate the number of 75-and-older residents, and the actual population in 2021 could explain it.

Henry said when the state announced that anyone 75 and older could be vaccinated, she sent an e-mail blast to all Roxbury residents explaining how to sign up using the federal vaccine system known as VAMS.

Almost immediately, her office was inundated with calls from people who couldn’t get an appointment or couldn’t register.

So Henry, along with her Agent for the Elderly Jerrilynn Skene-Tiso and her Senior Center Director Linda Wahlers, started helping people find appointments. She said many ended up skipping VAMS altogether and just calling Griffin Hospital, which runs an almost daily vaccination clinic in Shelton.

To help people get to Shelton, they used the senior center bus to transport small numbers of elderly residents at a time. Henry said others signed up for a clinic at Post University in Waterbury, only to have their appointments canceled because they didn’t get enough vaccine.

Roxbury is part of a health district with Newtown and Bridgewater, and Henry said the health district held its first vaccine clinic in Newtown last weekend. Roxbury filled its 10 slots out of the 100 vaccinations that were administered.

“We are a small town, so we are used to being at the bottom of the food chain for health services,” Henry said. “So we just took it upon ourselves to help people get signed up, and I’m proud that we have done well.”

Henry did use the VAMS system to sign up her own 95-year-old mother. She drove her to Waterbury to get her first vaccine at the Della Pietra Pharmacy on Highland Avenue.

“It went very quickly. She actually got vaccinated before her appointment time, because there were only a few people there,” Henry said.

Waterbury is one of the cities that has been lagging behind in vaccinating its elderly population. By Monday morning, it had vaccinated only 24 percent of the 1,770 people eligible.

Correction: A previous version of this story incorrectly reported that Marilyn Monroe had been married in Roxbury. She and Arthur Miller were married in New York.