Hearing is expected to run 24 hours 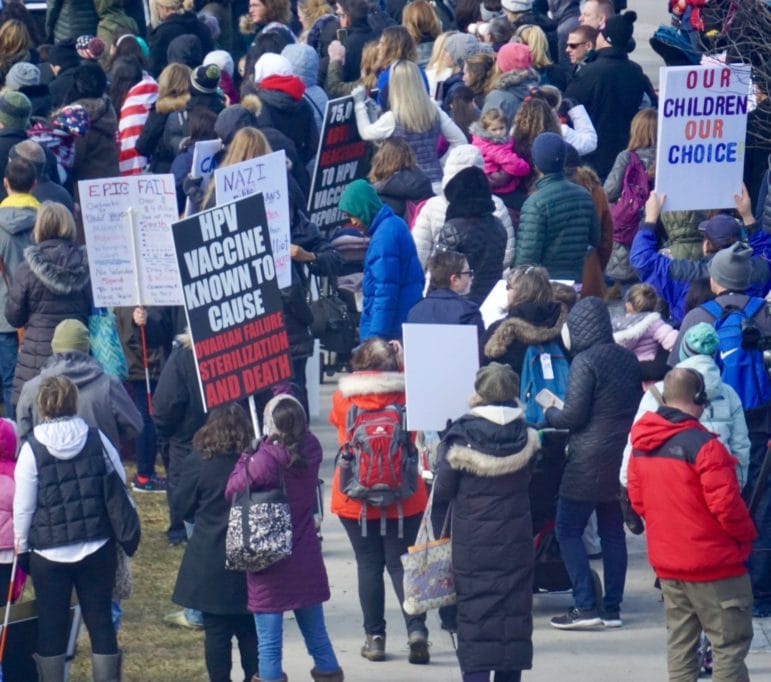 A public hearing on the religious exemption bill last year drew crowds to the state Capitol and ran for more than 21 hours. This year’s hearing is expected to last 24 hours.

Tensions flared Tuesday as parents, educators, and others testified for and against bills that would remove Connecticut’s religious exemption from mandatory school vaccinations.

Nearly 2,000 people signed up to speak at a public hearing that began at 9 a.m. and is expected to run no more than 24 hours. Leaders of the Public Health Committee imposed the time restriction, saying that if everyone who signed up to testify were permitted to speak, the hearing would last for days. Each speaker was limited to three minutes.

Most of those who testified during the first four hours of the hearing were opposed to the measure.

“I am a small business owner and a single parent to a 5-year-old who will not be able to attend Kindergarten with his peers if these bills are to pass,” said Kristen Diekmann, an Ellington resident. “Religious freedom is not just about the right to worship in a church or synagogue. It’s about not having to violate your core beliefs to conform to culture or to government. Removing the religious exemption will not change my values or beliefs around vaccination. It will, however, force myself and many others like me to consider leaving the state.”

Critics of the bills said the proposals violate their religious freedom and constitutional rights. Some threatened to move out of Connecticut if the measures were to pass. Others warned that they would sue.

“There are people, including me, that are preparing for a potential – if this thing does get through – we’re preparing for a legal challenge,” said Lindy Urso, a Stamford attorney. “And we actually like our chances very much.”

Many speakers fumed over the time restriction, saying it silenced the voices of hundreds who are unlikely to be able to testify despite signing up. Some said holding a virtual public hearing – the state Capitol complex is closed due to the pandemic – was unfair to those who don’t have an internet connection or don’t have access to a computer or mobile device.

More than one speaker questioned the priorities of the Public Health Committee, given that Connecticut is still dealing with the COVID-19 crisis.

“We’re in the middle of this COVID pandemic with its countless public health challenges, and you people are making this committee’s No. 1 priority what is by far the most controversial issue probably ever,” Urso said. “Worst of all, you’re pressing ahead with this bill at a time when all children in the state have already suffered measurable psychological harm from the pandemic.”

“I cannot imagine the disappointment my son will feel if I have to tell him that he will not be able to enroll in camp or school next year because our religion doesn’t matter to the state,” parent Catherine Ambrose said. “But know that we will not change our convictions to comply with an unconstitutional law if this bill is passed.”

About four hours into the hearing, a school nurse was the first to testify in favor of the measures, both of which would erase the religious exemption.

The latest version of the proposal would allow children in seventh grade or higher to continue claiming the religious exemption. Anyone in grades six or under would no longer be eligible, as would anyone entering the school system in the future.

Rep. Jonathan Steinberg, a co-chair of the health committee, has said the growing number of young children claiming the exemption in recent years concerned him and others working on the bill. It is also more difficult for older children, who have been enrolled in school for years and have deeper ties to the classroom, to stop attending in person, he has said.

The bills do not force children to be immunized, but they do bar children who are not vaccinated because of a religious or personal belief from attending public or private school.

Along with repealing the religious exemption, the bills would require the public health commissioner to release school-by-school vaccination rates annually, establish a board to review Connecticut’s vaccine program and urge doctors to carefully consider autoimmune disorders or a family history of them when granting medical exemptions.

This is the third consecutive year lawmakers have held a public hearing on the proposal. In 2019, legislators called press conferences and openly discussed rolling back the exemption, though no bill was introduced. Last year, they wasted little time addressing the issue: Two weeks into the session, they organized a public hearing and passed the bill out of committee just five days later. It never came up for a vote in the House or Senate, however, because the session was canceled amid the pandemic.

This year’s effort has been complicated by the COVID-19 crisis. Proponents of the bills say they expect more opposition because of the new coronavirus vaccine, even though that shot is not on the list of the state’s mandatory immunizations. Required vaccines include measles, mumps and rubella; diphtheria; tetanus; and poliomyelitis.

Critics worry the COVID-19 shot will eventually be on the state’s mandatory list. The vaccine is not currently approved for use in people younger than 16, though clinical trials for children are underway, and Dr. Anthony Fauci said children as young as first grade may be able to get it by the time school starts next fall, ProPublica reported.

Some of the speakers seized on those concerns Tuesday.