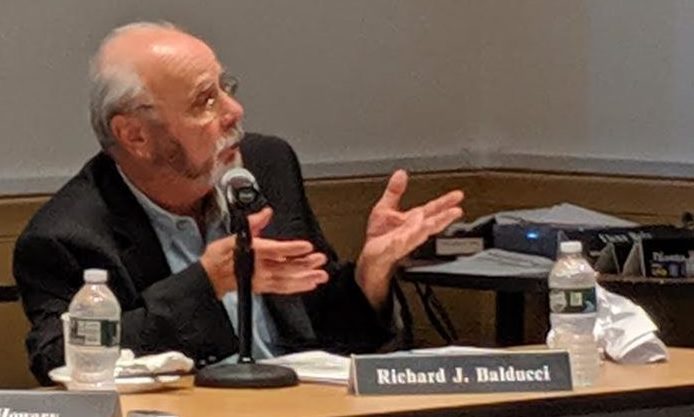 Richard Balducci, chairman of the Board of Regents finance committee, told the board Thursday that the community college system’s deficit will be much higher than expected.

Declining enrollment at Connecticut’s community colleges has increased the system’s deficit from $16 million in the fall to $22 million now, officials said Thursday.

During the Connecticut State Colleges and Universities board of regents meeting, Finance Committee Chairman Richard Balducci told board members that the system-wide deficit, pegged at $69 million this fall, dropped to $58 million due to reductions in spending.

But spending cuts did not help the state’s community colleges as much, as that system’s deficit is now projected to grow by nearly 38%, largely due to declining student enrollment. In October, Connecticut’s 12 community colleges saw a 15% drop in enrollment, and the four regional state universities saw a 5.5% drop.

Balducci added that the projected deficit increase does not include the second round of federal money under the Higher Education Emergency Relief Fund that the CSCU system expects, which they anticipate putting toward lost revenue and student financial assistance.

The system’s Chief Financial Officer Ben Barnes told the finance committee on Tuesday that even with help from the relief money, getting people to enroll is going to be a persistent issue and that they should invest in increasing enrollment to replace revenue the system may lose in the next few years.

“Community colleges make a lot more sense financially when we get closer to 30,000 [students]. But unfortunately, right now, the pandemic has pushed us in the other direction, and we’re getting down toward 20,000 [full-time equivalent] students, and so recovery of that is going to be a challenge,” Barnes said.

The University of Connecticut faced a $76 million projected budget deficit for the 2021 fiscal year but shrank it to $8 million by cutting $48 million in institutional costs — through hiring freezes, pay cuts, furlough days and other cost-saving measures — and receiving $20 million in federal coronavirus relief. The additional federal relief will close the remaining $8 million gap, and the rest of the funds will help cover its $18.3 million projected deficit for fiscal year 2022.

The proposal also provides $6 million to maintain funding for the Pledge to Advance Connecticut, or PACT, program — which helps low-income residential students to take community college classes debt-free – for the next two fiscal years.

But during Thursday’s meeting, board members said they are going to continue to push to get more help from the administration.

“We will have to be advocating very, very, very, very strongly for our system in the context of the many, many demands that the administration and the legislature will be facing,” said Matt Fleury, the chairman of the board of regents. “But I know that the regents certainly stand ready to participate and support that in any way we can. And I know that the rest of our university and college community will do so as well.”

by Adria Watson and Kasturi Pananjady

Fewer high school seniors are applying for college financial aid, largely due to the uncertainty of the COVID era.