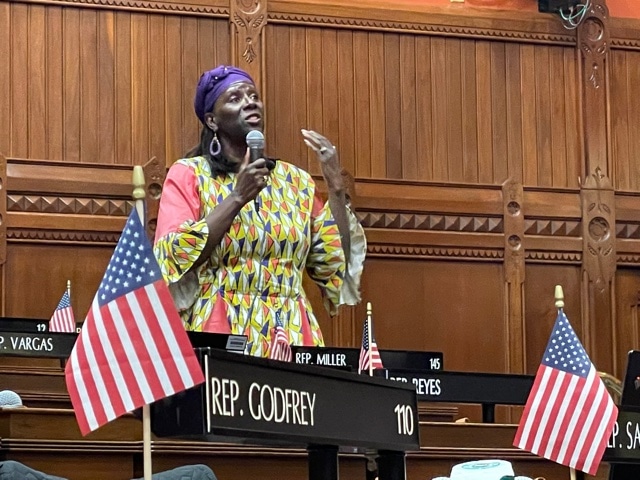 Rep. Patricia Billie Miller, who says she chose to wear African-influenced clothes for the session, argued in favor of a bill intended to protect Black women from discrimination over their hair.

The stories were personal, some from childhood. Rep. Toni Walker, D-New Haven, recalled walking into the wrong bathroom as a young girl in North Carolina in the late 1950s, only to be grabbed by her hair by a white store manager and pushed towards her mother.

“He said, ‘Take your nappy-headed kid out of my store,’” Walker said.

Others spoke of a pressure to conform. Rep. Patricia Billie Miller, D-Stamford, talked about the shame of caving in decades ago, straightening her hair to be hired — only to have her young daughter plead to straighten her own hair.

On Wednesday, those stories from Black women were central to the debate preceding a 139-9 vote by the House of Representatives to pass Connecticut’s version of the Crown Act, an acronym for “Creating a Respectful and Open World for Natural hair.” The bill now goes to the Senate.

The acts prohibit discrimination on the basis of hairstyles historically associated with race. California passed the first version in 2019 and was quickly followed by a half-dozen states and the U.S. House of Representatives.

The legislation is a reaction to the refusal of some courts to halt what advocates say was discrimination directed primarily at Black girls and women over how they can wear their hair on athletic fields and at the office. Courts disagreed over whether certain hairstyles associated with Blacks are racial characteristics protected by law.

“We deserve to be accepted in our authentic selves,” said Rep. Robyn Porter, D-New Haven, the measure’s lead sponsor.

On a day otherwise devoted to fiscal measures, the bill was fast-tracked to the House floor, at least in part as a rebuke of racist abuse on social media recently directed at Porter.

“You know how we respond? Not on social media,” House Speaker Matt Ritter, D-Hartford, said before the session at a news conference with the Black and Puerto Rican Caucus. “We pass bills, when we come right back with legislation on the Crown Act.”

House Minority Leader Vincent J. Candelora, R-North Branford, consented to the quick vote, noting that a similar measure was filed last year before the COVID-19 pandemic forced a premature end to the 2020 session.

COVID still is hampering the legislature. Public hearings and committee meetings are conducted by video conference, and most House members watched the debate Wednesday and voted from their offices.

“Given that we are limiting the amount of time that we come into the chamber, the opportunity presented to take up legislation that is agreeable. And in addition, it’s not lost on any of us that we’re in Black History Month,” said Candelora, who voted for the bill.

All nine no votes were cast by Republicans.

One was Rep. Kimberly Fiorello, R-Greenwich, an Asian woman married to a Caucasian man. She said her mixed-race son has been subjected to racial epithets by opponents in athletic contests.

“The racial epithet hurts, and hurts me when he comes home and tells me what was said to him,” Fiorello said.

But she said she did not see legislation as an antidote to racism.

“The journey we’re on is not all about passing laws,” she said. “We can pass many more like this bill. We can pass laws and legislation and address each and every instance of racism. Today, it’s hair texture.”

After the vote, when Porter celebrated the passage, Fiorello waited to talk to her. They briefly chatted about perhaps finding common ground on other issues. 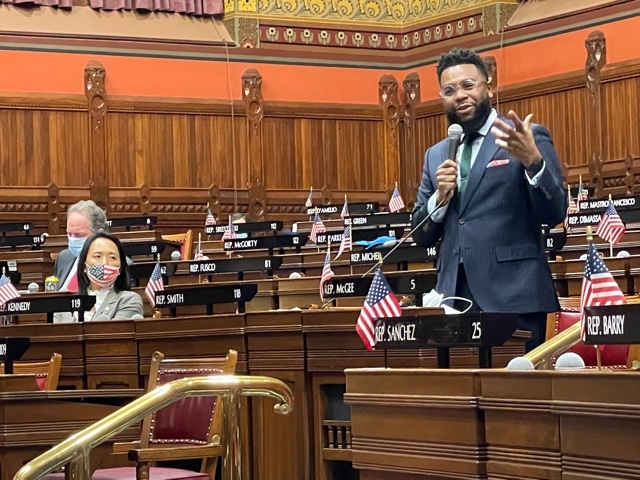 Rep. Kimberly Fiorello, left, who spoke against the bill, listens to a supporter, Rep. Brandon McGee.