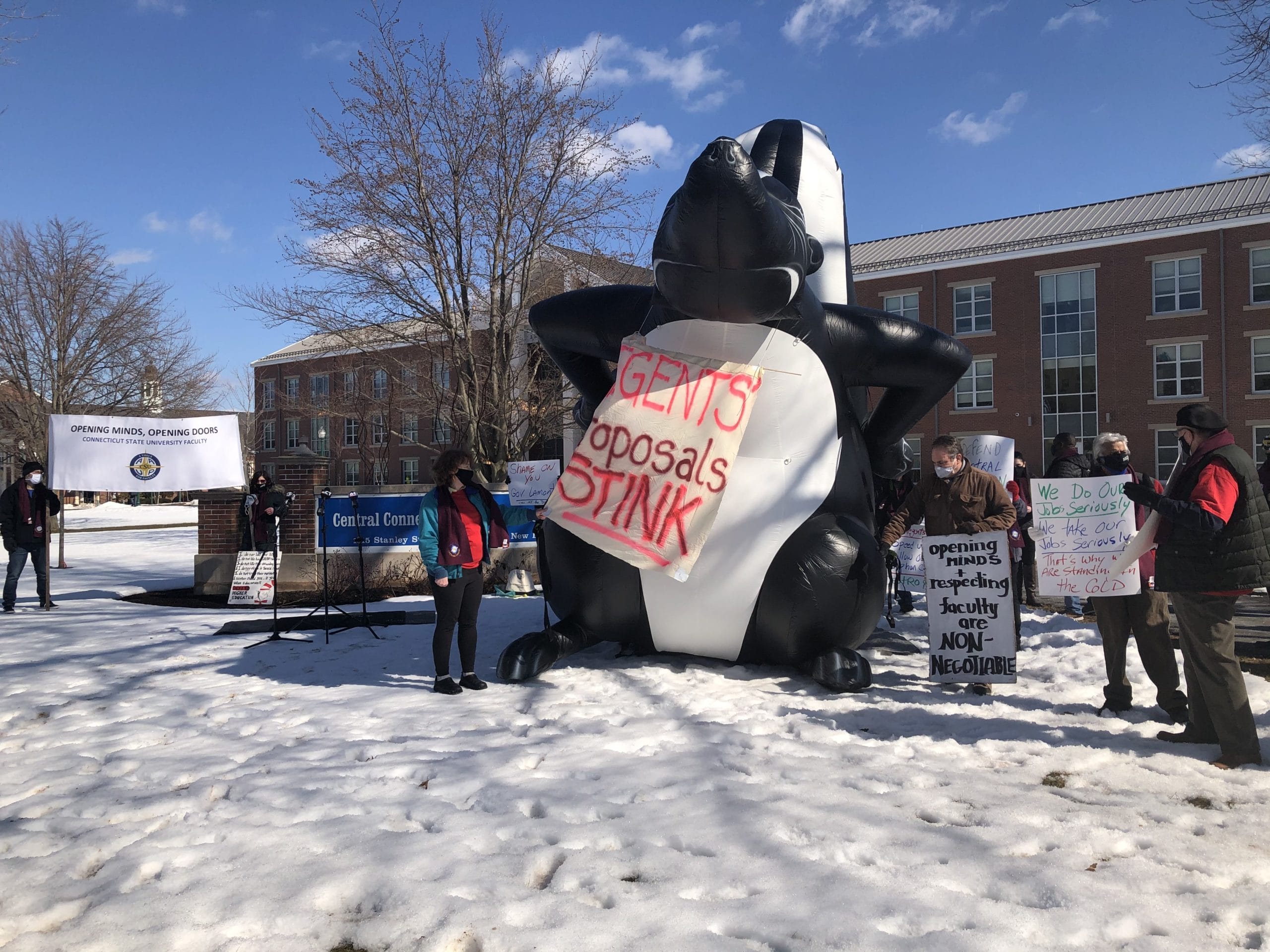 CSCU students and faculty protest against the Board of Regents’ contract proposals outside of Central Connecticut State University on Feb. 26.

Connecticut State Colleges and Universities faculty and students gathered outside of Central Connecticut State University Friday morning to protest the Board of Regents’ recent contract proposals, saying the changes could lead to larger class sizes and possibly losing accreditation.

“The BOR must … understand their proposals are developed with union-busting in mind,” said Eastern Connecticut State University anthropology professor Sarah Baires. “And while they might believe they are attempting to build a better CSU system, they are ultimately destroying opportunities for students to be successful and hence undermining the future of the state.”

The contract proposals are in negotiations and details haven’t been made public, but those privy to negotiations expressed a wide range of concerns.

Some of the concerns were focused on potentially losing accreditation, professors taking on extra work and having larger class sizes, and students losing out on search time and having fewer counselors.

“The BOR wants to take away certain safeguards that professors have that will not allow students to gain a quality education and a promising degree,” said Central Connecticut State University student Johanna Zukowski. “Increased class sizes and increased demand of course loads for full-time faculty will directly impact the students.”

Allowing limited class sizes creates a positive learning environment for students, and they like to be in classes where they feel seen, she said.

“It is important that students have these interactions, because they oftentimes lead to educational and career opportunities. This support will undoubtedly disappear under the BOR’s new proposals.”

Legislative leaders who joined students and faculty Friday voiced their disapproval with the BOR’s contract proposals and the process, saying that they could not believe the proposals that were being made by the BOR when they saw them and did not think they would be good for the university system.

“We as legislators, we have an obligation to be here with you and support you to understand these issues, and to make sure that the people who are running this place realize that they can’t make these negotiations secret or private,” said Labor Committee Co-Chair Sen. Julie Kushner, D-Danbury. “We’re going to shine a light on what’s happening here, and we’re going to demand that they come to the table and negotiate a fair contract that not only benefits the faculty but also benefits the students.”

Rep. Josh Elliott, D-Hamden, the co-chair of the Higher Education Committee, shared the same concerns as Kushner, adding that what’s been made clear to him is that there has been a lack of transparency, communication and respect from the board.

“Looking at what the Board of Regents wants to do, and looking at how these contract negotiations are going, it’s very clear that they’re taking the approach of asking for absolutely everything and trying to negotiate to whatever that perceived middle is,” Elliot said. “And you never want to accuse the person that you’re dealing with of acting in bad faith. But the terms of the contracts that I’ve read are onerous, they are disrespectful, they treat you like chattel.”

CSCU Interim President Jane Gates responded to Elliott on Friday, saying that his comments comparing the contract proposal to slavery are “beyond the pale.”

“I will not sit back and allow someone who has not been involved in this process to compare our contract proposal, which, by the way, includes livable wages and job security for university professors, to the horrors of slavery – a stain on our nation’s history from which we have still not recovered,” Gates said in a statement. “I am disappointed by Representative Elliott’s comments. I hope he will take the time to learn how inappropriate it is for him to try to use the horror of slavery rather than take the time to discern what the truths are and how best to act upon them.”

Gates sent out a video to the CSCU students, faculty and staff Friday morning addressing the concerns raised about the contract proposals.

In the video, Gates said she recognized the importance of professional development opportunities for professors, shared governance and accreditation.

“Despite disinformation that I know has caused fear among members of our community, all the items I just mentioned are important to the Board of Regents and to our institutions and will be supported,” she said, adding that there are disagreements coming from both sides but that is how the process works, and they will continue to work through it.

“I am confident – and [the CSCU community] should be, too – that we will come to terms on a contract that maintains the quality and affordability of our institutions while setting us up for long-term viability.”

During a Feb. 18 Board of Regents meeting, faculty members and students also brought their concerns and frustrations with the proposal to the board during the public discussion portion of the meeting.

Board Chairman Matt Fleury refrained from responding to specific comments directed at the board during public comment but said the board is serious about getting the contract right.

“We listen to hear, we take notes, and we revisit with our management team and our negotiating team … recognizing that parties began at the extremities and then arrive at the middle because they both care about what’s best in the end for students and those who serve them,” he said.

Fleury added that the board does not expect the current state of the contract to remain when negotiations end, which is expected to be by May 1.

“Nobody who is in the negotiating game on either side in their right mind believes that. Don’t let them tell you that. It’s not true.”