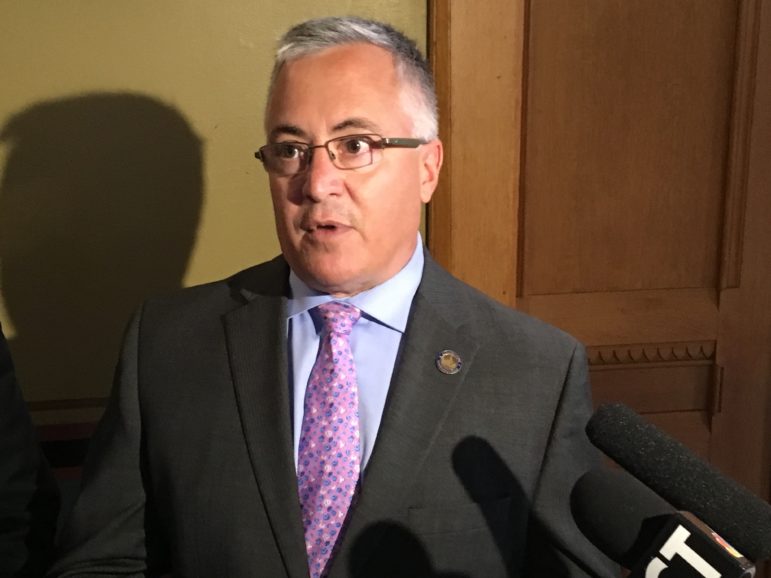 State officials imposed a new payroll tax starting Jan. 1 to launch the Connecticut’s Family and Medical Leave program — but it’s more than two months into the year, and they haven’t begun collecting the levy from qualified state employees.

Many businesses also are late collecting the 0.5% payroll tax, and all overdue contributions — from both public- and private-sector workers — will eventually be paid to the state retroactively.

The state’s delay sends the worst possible message to households struggling during the pandemic, the House of Representatives’ top Republican charged Tuesday.

“It’s the height of arrogance, and it is certainly, in my opinion, why Connecticut households are so discouraged,” Minority Leader Vincent J. Candelora of North Branford, who first discovered the delay, said Tuesday afternoon.

Comptroller Kevin P. Lembo’s office, which oversees most of the state’s payroll system, said payroll deductions are scheduled to begin for non-union employees in mid-April. Unionized state employees are not part of the paid leave system.

But Connecticut’s finances aren’t handled uniformly. The various branches of government, as well as specialized units such as the University of Connecticut, also play a role.

The CORE-CT computer system that helps these different entities manage payroll couldn’t handle the necessary deductions. Rather than have each payroll agency manage its own deductions, “It was decided that it was worth the effort to get it right on a larger scale to maximize state resources and ensure the accuracy of the deductions,” said Tyler Van Buren, Lembo’s communications director.

“We’re grateful for the legislators who have brought this issue forward and share their commitment to making sure this critical program is successful as it will benefit thousands of workers throughout the state,” Van Buren added.

According to the Connecticut Business and Industry Association, about 60% of businesses have registered to participate so far.

The Department of Labor did anticipate that businesses would have issues with the new payroll requirement and allowed them until June 30 to begin collecting the deduction. All those that begin late, though, most also pay funds into the system retroactive to Jan. 1.

The Democrat-controlled legislature enacted the paid leave program amid much fanfare in 2019, making Connecticut a national leader in terms of guaranteeing some financial security to workers who must take time away from work to care for an ill relative or to resolve some other family crisis.

The benefits become available in January 2022, but Connecticut was supposed to begin building a trust fund to finance the program this past Jan. 1.

Candelora appealed unsuccessfully to Gov. Ned Lamont and to majority Democrats in the legislature back in December, suggesting Connecticut postpone the assessment for six months.

Given the toll the coronavirus pandemic had taken on so many, the North Branford lawmaker argued, many businesses weren’t ready to begin collecting the tax, and many households couldn’t afford to pay it.

“Let the people keep their money, and let’s get through this” pandemic, Candelora said. “Now the state hasn’t even complied with the law that it says is so necessary? It’s outrageous.”