Can the state defend a newspaper against a hedge fund? 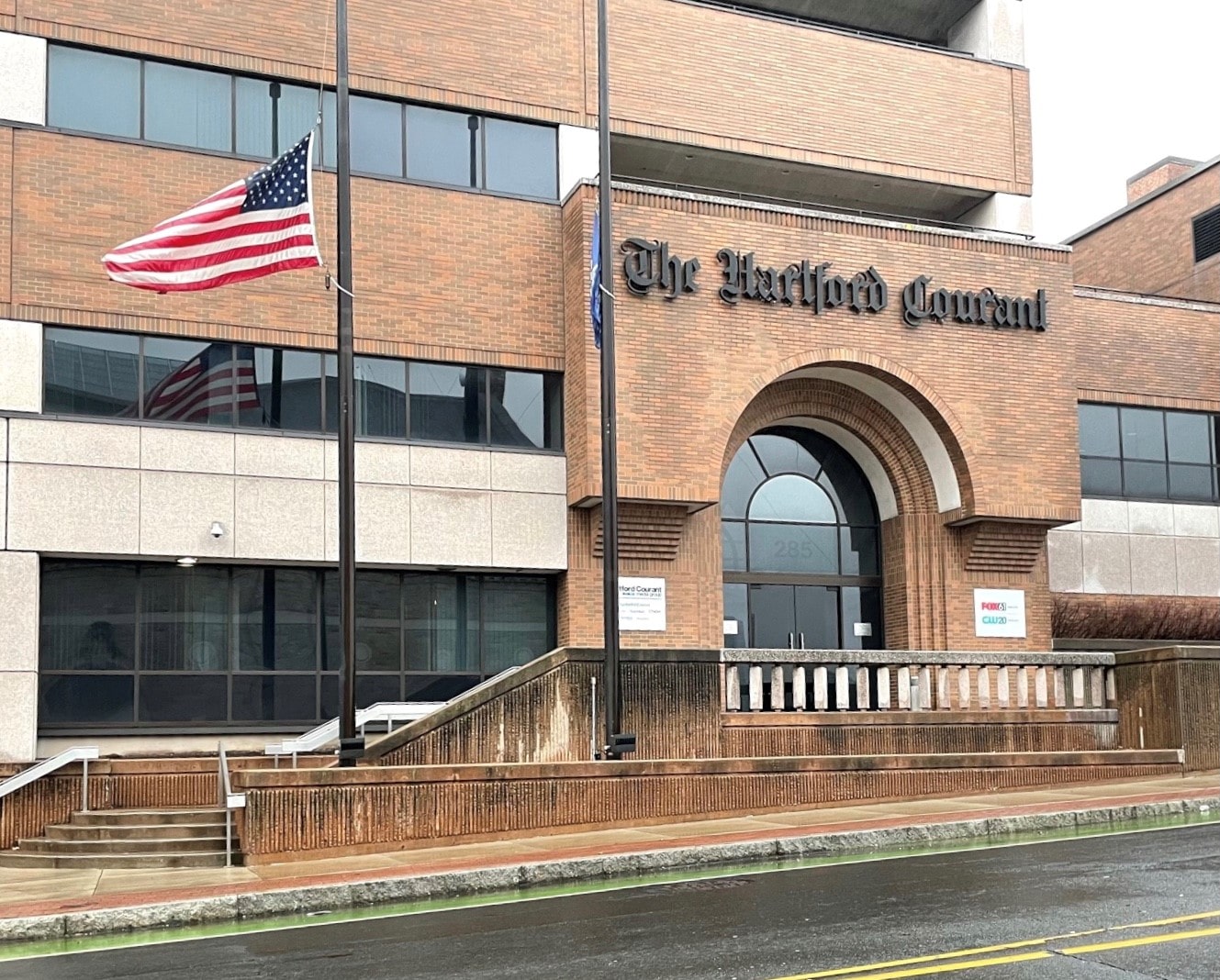 The Hartford Courant’s building on Broad Street in Hartford is for sale.

The impending takeover of The Hartford Courant by a cost-cutting hedge fund, Alden Global Capital, was decried in testimony Thursday before a legislative committee weighing an unusual bill that would give the state a role in the newspaper’s finances.

Behind the legislation is a notion embraced by publishers in any other setting: Newspapers, especially one whose founding in 1764 predates the American Revolution, are institutions of public trust and benefit, even if privately owned.

The bill filed by Sen. Matt Lesser, D-Middletown, whose father once reported for the Washington Post, seizes on the fact that The Courant, owned by national newspaper chains since 1979, sought a business charter the General Assembly granted in 1887 and revised repeatedly, most recently in 1951.

“So there is a history of the legislature passing special acts about the corporate structure of the parent company of The Hartford Courant,” Lesser said. “That is different from me going in and saying, ‘I’m looking to manage the news operations of the publication.’”

The bill would bar The Courant’s ownership from incurring debt or issuing dividends that are “not in the public interest,” provisions aimed at blocking Alden from some of the vehicles used by equity funds to wring cash out of newspapers, rather than invest in them.

It would allow the attorney general or anyone who has subscribed to the paper for at least a year the legal standing to go to court and seek an injunction against Alden for financial moves not in the public interest.

Andrew Julien, the publisher and editor-in-chief of The Courant, and Chris VanDeHoef, the executive director of the association that represents all 17 daily newspapers in Connecticut, opposed the bill as a government intrusion at odds with the First Amendment.

But no one defended Alden or its business model.

Alden is expected to close later this year on a $630 million deal struck to purchase Tribune Publishing, the publicly traded owner of papers such as The Courant, the Chicago Tribune, Orlando Sentinel, Baltimore Sun and New York Daily News.

Lesser’s bill appears calculated to give Alden a reason to sell The Courant, should a white knight step forward to operate the paper as a non-profit, as has happened in Salt Lake City, Philadelphia, and is being attempted in Baltimore.

(The Washington Post reported this week that Stewart Bainum Jr., the potential buyer for The Sun, recently complained that Alden was trying to gouge him with fees, prompting him to say he might try to convince Tribune to sell him and their investors the whole chain.)

Indeed, Rebecca Lurye, the reporter who is the chair of the Hartford Courant Guild, cast her support of the bill as an element of a campaign to eventually put the paper in the hands of new, civic-minded ownership.

“We believe ample community support exists to liberate The Courant from a hedge fund content to let it die,” Lurye said in written testimony. “We urge the legislature to do anything and everything in its power to protect and preserve this institution.”

Much of the testimony delivered Thursday, either live during a hearing conducted via Zoom or in writing, reflected the anger and fears over the rapid diminishment of American newspapers during the shift from print to digital publishing.

Newsroom jobs have shrunk by about half since 2008, according to research published last year by the Pew Research Center. With a news staff of nearly 400 at its peak two decades earlier, The Courant currently has about 70 reporters, editors and photographers, Lurye said.

While the erosion of newsroom staff and coverage generally has come in increments, two recent developments have packed a bigger punch: first, the outsourcing of printing to Springfield and then the permanent closure of the paper’s newsroom and offices at 285 Broad St., across from the Legislative Office Building and a block from the Capitol.

Its news staff had been working remotely during the COVID-19 pandemic, but the loss of the newsroom and the absence of any public plan for a new home rocked not only the staff but a broad range of politicians, including Lesser.

VanDeHoef, of the Connecticut Daily Newspapers Association, acknowledged that the consolidation of the media, the cutbacks in staff and coverage, and the closing of newsrooms are troubling, but they do not justify Lesser’s bill.

“We believe that it’s an unconstitutional attempt to exert government influence over a free press,” he said.

In written testimony, The Courant’s publisher made the same point.

“Handing the Attorney General or Superior Court judges the authority to decide if a newspaper is acting in the public interest undermines that fundamental tenet, whether it be involving scrutiny of the newspaper’s editorial or business decisions,” Julien said. “A press whose actions are subject to government review and action is not free.”

“I don’t like that framing, that we want a newspaper to do certain things,” Lesser told VanDeHoef. “That to me is anathema to what the First Amendment’s about and what our role is.”

Lesser said the bill is tightly focused on preserving The Courant’s fiscal health and gives no outside entity a say in news decisions.

A public hearing before the legislature’s Insurance and Real Estate Committee was an unlikely venue for a debate over the diminishment of newspapers.

Much of the testimony Thursday was directed at the committee’s more typical interests: bills directed at insurance coverage for medical procedures and tests, including bariatric surgery and ultrasounds to detect cancer in women who have dense breast tissue that leave mammograms unreliable.

But Lesser is co-chair of the committee, and its members agreed to raise the bill for the public hearing.

Penelope Abernathy, a journalism professor and former senior executive at the New York Times, Wall Street Journal and other papers, gave the committee a succinct overview of the threats to newspapers like The Courant and the dangers to civic engagement.

“There’s a whole raft of research that says why every one of us should be concerned about the loss of a newspaper or the diminishment of a long standing newspaper, like The Hartford Courant,” said Abernathy, whose post-newspaper academic life has focused on tracking the stresses on the industry.

She coined the term “news desert” in exploring the loss of 2,100 newspapers — one quarter of all papers — in the last 15 years. Abernathy allowed that “news poverty” might be a more appropriate term for markets that still have papers but have seen a dramatic reduction in coverage.

Abernathy said the impact of shrinking newsrooms ripples widely, depressing voter turnout and leaving the public more susceptible to misinformation. The Pew Research Center found in 2019 that more than half of people surveyed had noticed that the coverage of local news was shrinking fast, and an examination of 100 communities by other scholars found 20 with no local news.

“So for me, as the researcher who’s been banging this drum for the last five years, it is very encouraging to me that we finally got public awareness that something is slipping away,” she said.

Fraser Nelson, the vice president of business innovation at the Salt Lake Tribune in Utah, told the committee that a wealthy philanthropist, Paul Huntsman, was able to wrest that paper from Alden, then place it in the hands of a non-profit foundation. It was the first such transfer, though not the last.

“And maybe a few of them are listening now.”