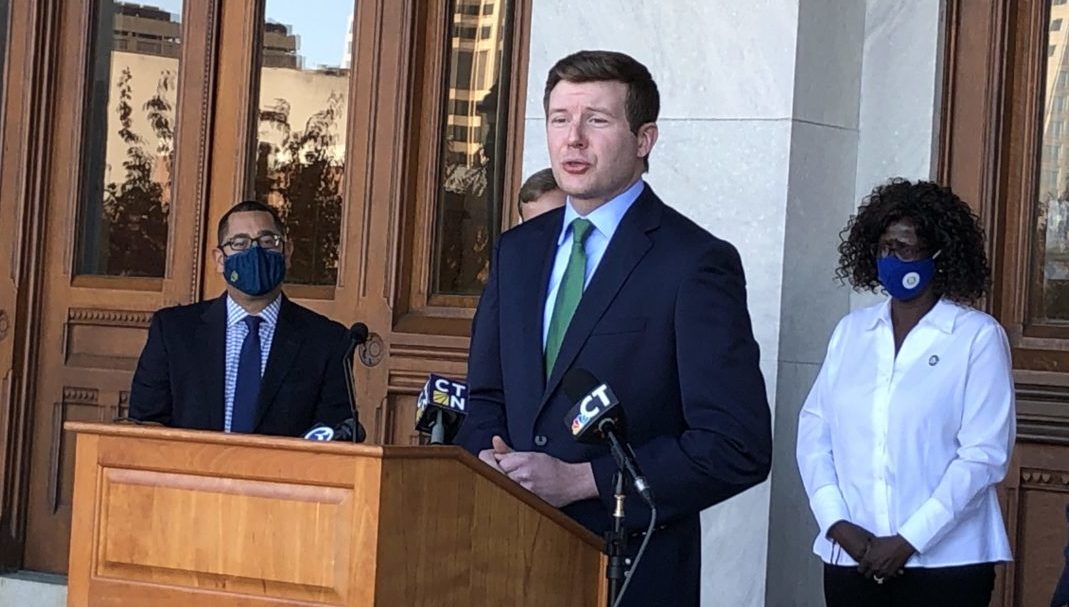 House Democrats insisted Wednesday they remain committed to delivering state income tax relief to families with children, but it won’t arrive until the spring of 2023.

House Speaker Matt Ritter of Hartford and Rep. Sean Scanlon of Guilford said the caucus is determined to launch a program that provides both significant and lasting relief for low- and middle-income households struggling to afford raising a family in Connecticut.

“We want to make sure we get this right. We don’t want to have it be: it goes up, then it goes down, we’re phasing in and phasing out forever,” Ritter said during a live-streamed press conference. “We want it to be predictable and stable for families.”

Scanlon’s proposal is patterned somewhat after the federal child tax credit, though the Guilford lawmaker noted that the federal tax break, for most of its history, has not been refundable, effectively excluding millions of people who needed it the most.

“We did not want to make the same mistake with our state version and leave the most vulnerable behind,” he said.

As part of the $1.9 trillion American Rescue Plan Act enacted last month, Congress temporarily enhanced the federal credit and made it fully refundable. The change applies to the 2021 tax year.

Scanlon’s proposal will launch the Connecticut child tax credit in the 2022 tax year, meaning eligible households can begin claiming it with returns filed in early 2023.

But the credit, as initially envisioned by Scanlon, would have been broader in scope.

It was originally aimed at households earning as much as $682,000 per year, though credits for those topping $200,000 would have been reduced on a sliding scale.

Scanlon said Wednesday that rough projections show the program would cost the state $150 million in the first year and between $250 million and $300 million annually after that.

One of the goals, he said, is to avoid the wide swings that another middle-class state tax relief program has experienced throughout its history — one which reimbursed households for a portion of their local property tax payments.

But from 2011 onward, state officials steadily whittled away at this credit to close one budget deficit after another. It has fallen from $500 to $200, it was limited only to seniors or to households with children, and income eligibility guidelines were tightened.

The program that provided $365 million per year in middle-class tax relief one decade ago now offers $63 million annually.

Ritter added that House Democrats still plan to complement the new child tax credit with a proposal to bolster a key non-education grant program for cities and towns.

The PILOT, or Payment In Lieu Of Taxes program, reimburses communities for a portion of the revenue they lose because state law exempts certain types of property from local taxation.

The legislature enacted a measure earlier this month that bolsters PILOT payments for low-income communities. It’s projected to cost the state about $136 million per year.