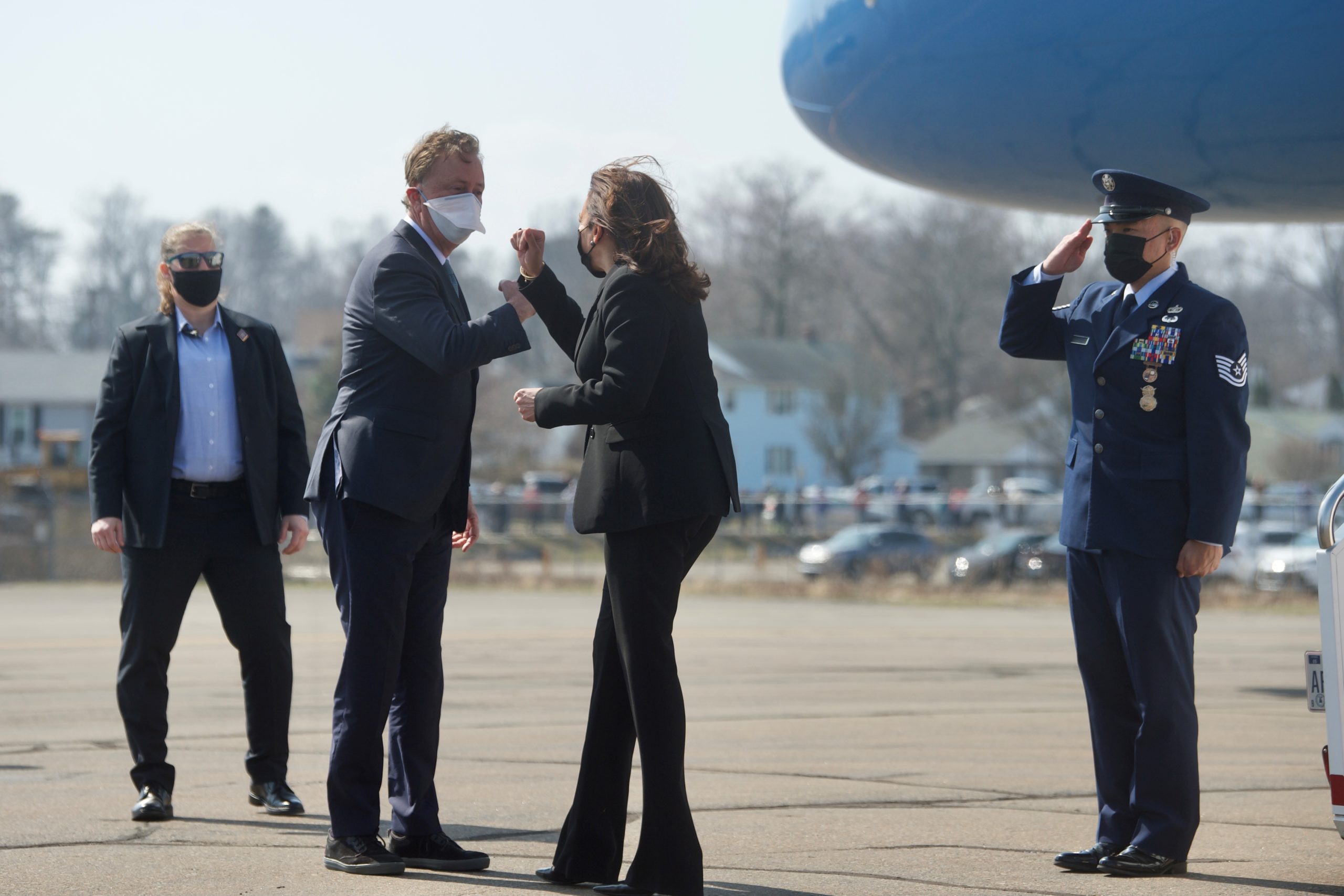 The residential streets surrounding the airport were lined with crowds. Many appeared to be supporters, clapping and cheering as the motorcade passed. One large plywood sign was spray painted with the words “Americans First.”

The visit, which was announced Monday by the White House, is part of the Biden administration’s “Help is Here” tour to promote the stimulus package.

Her first stop was the Boys & Girls Club of New Haven, where she was introduced by Cardona.

Harris said Connecticut adopted education policies that are “very progressive, courageous and innovative.” The pandemic, she said, has exposed “fault lines” in our system, and the administration’s American Rescue Plan will have a generational impact in addressing childhood poverty.

“The connection between childcare and these other systems are so direct,” she said.

When she entered the red stone building that houses the Boys & Girls Club, Harris said she thought back to her own experience growing up as the child of a working mother. She would often walk to her neighbor, Regina Shelton, who she said was “like a second mother” to her.

The roundtable discussion, which featured Harris, Cardona and Beth Bye, commissioner of Connecticut’s Office of Early Childhood, and other political dignitaries, was closed to the press, but reporters were briefed after.

Harris says the group spoke about the increase in the number of reports of child neglect that rose in Connecticut during the pandemic, as well as the mental health impact of the coronavirus crisis on children.

On Georgia’s voting restrictions, Harris said she believes “very strongly that Congress needs to pass the ‘For the People Act’” and strengthen the Voting Rights Act. She said Georgia’s new voting law, which imposes a number of restrictions, is an intentional “attempt to prevent whole populations of people from exercising their constitutional right to vote in their elections.”

She also said President Joe Biden did “a really great job” during his news conference Thursday.

“We should take a look at the filibuster,” she said. “Ultimately it’s going to be the Senate that’s going to make that decision. But … we do have to get to a place where it’s not so easy to block progress, because the American people need us to act.”

Asked if President Biden should take executive action on issues such as gun control, she said, “I think the president has been quite obvious in his intention to be bold.” The American Rescue Plan is an example of that boldness, she said.

From there, the group drove to the West Haven Child Development Center, where they arrived around 4:20 p.m. A group of 3- and 4-year-olds wearing masks were waiting.

Peter Velz, with the vice president’s office, taught the children that Harris’ name was pronounced “Comma-la.” They repeated after him.

When she arrived, Harris knelt on the floor and told the children they can be anything they want to be. “I want to be everything,” one little girl declared.

DeLauro, who is known for her bold fashion choices, complimented some of the youngsters on their clothes. “I love your unicorn shirt,” she told one child.

Later, DeLauro addressed a crowd of reporters and political leaders, highlighting the child tax credit and aid to child care centers that are part of the American Rescue Plan.

“Today is a celebration. We are celebrating a historic victory. It is an unbelievable effort that was made to get this bill passed,” she said.

Harris “understands what parents go through … she has been so tireless in breaking down the barriers,” DeLauro said. The benefits that are part of the plan will address child poverty and help working parents, she said.

Harris said she was impressed by the preschoolers.

“I am positive one of them will be president of the United States,” she said.

Visiting the center showed that “when a child is supported by the infrastructure that says they have beautiful brains that must be fed … these children can and will be anything they chose.”

“We know when children don’t have their basic needs [met], they can’t perform,” she said. “It’s so fundamental, what we are talking about. … You invest in our children, you’re going to get a huge return on your investment,” Harris said.

Harris also thanked DeLauro. Before coming to Connecticut, Harris said, she stopped in the Oval Office to meet with Biden. Before she left, Biden said, “Please tell Rosa I love her.”