'The religious exemption will be removed from Connecticut state statute this year,' House Speaker says 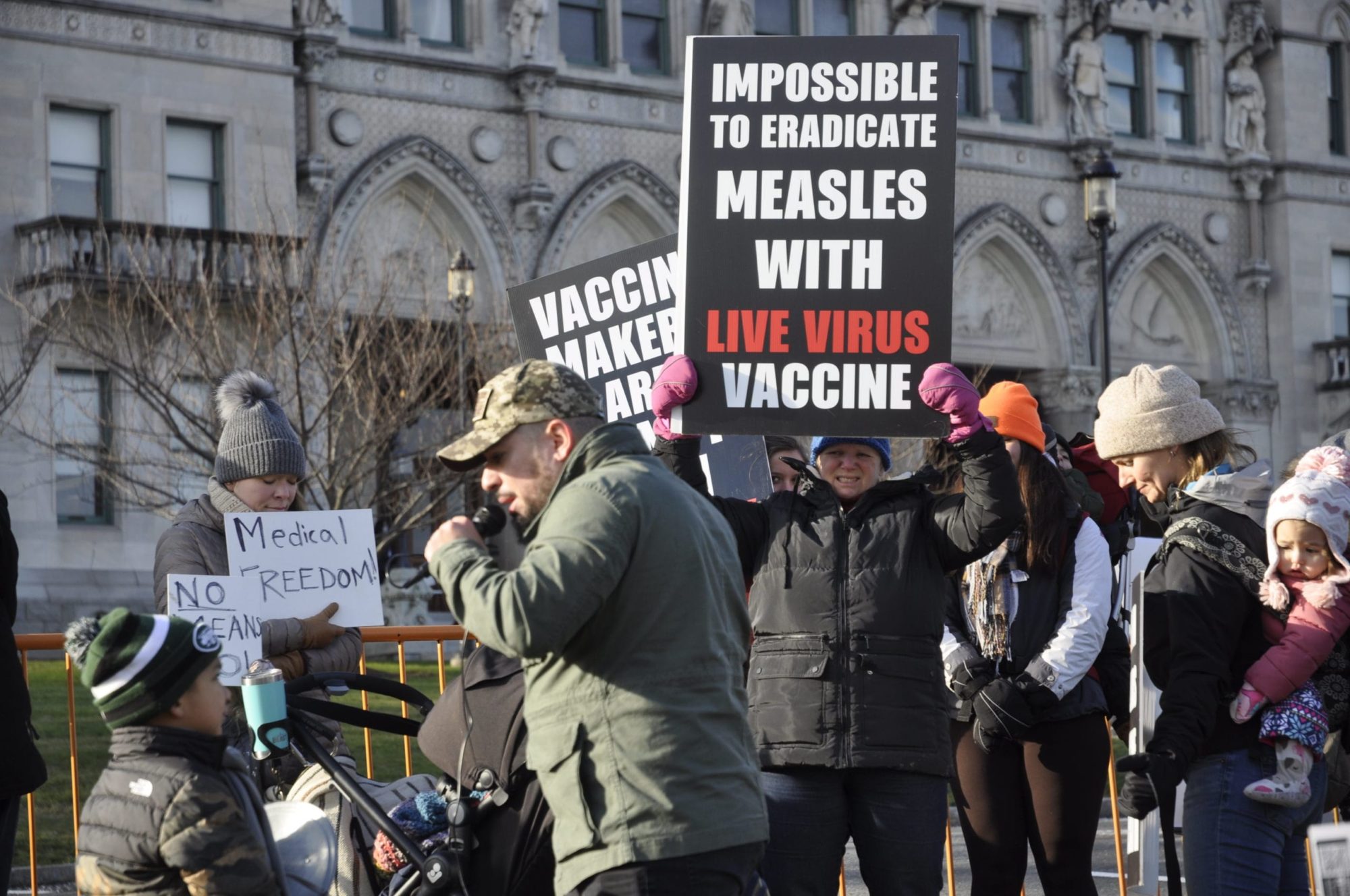 Protesters waved flags and carried signs outside the state Capitol in January in opposition to the state’s COVID restrictions and in protest of a proposal to eliminate the state’s religious exemption from mandatory childhood vaccinations.

Legislation that would remove Connecticut’s religious exemption from mandatory school vaccinations is headed to the House and Senate after the Public Health Committee approved two identical bills Wednesday, saying it wanted to give the proposal the best chance of succeeding by sending it to both chambers at once.

It’s unclear which chamber will take up the bill first. House Speaker Matthew Ritter declined to discuss the timetable for a vote but said he’s confident the measure will win approval.

“The religious exemption will be removed from Connecticut state statute this year,” Ritter said in an interview Wednesday. “I think there’s going to be some debate about when it will be effective and which grades it will apply to. But the committee vote demonstrates that there’s broad support to do this.”

“It’s a very emotional issue, and each member has to make their own determination,” he said. “But the overall question of whether we should have a religious exemption going forward in Connecticut, I think the answer is that people realize it’s not going to happen.”

Senate President Pro Tem Martin Looney also did not say which chamber would address the legislation first, but echoed that the measure would be successful.

“I believe we have the votes in the Senate to pass a strong bill,” he said. “I think people, over the years prior to the pandemic, had become a little too casual about some very serious diseases because they no longer saw them having an impact. We’re now seeing the impact of a disease that went close to a year without having an effective vaccine. That should create a climate of greater support for broad-based vaccinations.”

Looney said the Senate is aiming to vote on the measure by the end of April.

Despite strong support for the bills, Republicans on the Public Health Committee criticized the idea Wednesday of moving along two identical measures that would both erase the exemption. The vote broke along party lines, with all 22 Democrats backing the proposals and 11 Republicans voting against them.

“The fact that there are two separate bills, one for each chamber, is disingenuous at best. And in my personal opinion, it’s a game,” Rep. Christie Carpino, R-Cromwell. “We should not be playing games. The public needs to understand what is happening.”

Jonathan Steinberg, a Democratic co-chair of the committee, said the strategy was meant to “preserve flexibility for scheduling such a bill in whichever chamber is able to deal with it,” and to ensure the proposal moves though the General Assembly “as expeditiously as possible.”

Several members – Republicans and Democrats – suggested the language of the bills be revised to allow all children currently enrolled in school to continue claiming the religious exemption; as currently drafted, the bills only allow students seventh grade and higher to keep claiming the exemption. Authors of the proposal drew the line at seventh grade because of state data showing a larger number of children in younger grades opting for the religious exemption.

“You’re displacing children from school who’ve just missed an entire year,” said Sen. Heather Somers, R-Groton. “This bill will tear families apart if we don’t at least … grandfather in those from kindergarten and above. But I would go further; if you’re going to do that you have to look at families … that have children in preschool or daycare. If you only allow the grandfathering from kindergarten and above, you’re going to leave out their toddler.”

Rep. Sean Scanlon, D-Guilford, said that once the measure gets to the floor of the House, he will suggest an amendment that would allow all children currently in school to continue claiming the religious exemption. In that case, the bill would only apply to new children entering the school system in the future.

“What I do have a little bit of a problem with is the notion that children who cannot make a decision for themselves will be the ones hurt by this decision, if we don’t grandfather all of them in together,” he said. “Going forward, I believe the choice is clear. Any parent who has a child [not yet in kindergarten] or has not had a child yet would know full well what they are facing, and they can make decisions accordingly. But parents who already made the decision based on what was in current law, I just am finding it hard to accept they should have to have this change on them.”

Along with removing the religious exemption, the bills require the state’s public health commissioner to annually release school-by-school immunization data; help parents who cannot afford vaccines get access by mandating that cities and towns cover the expense; and create a board to review Connecticut’s vaccine program and issue recommendations.

Committee members noted Wednesday that the COVID-19 vaccine was not on the state’s list of mandatory immunizations and that the bills did not mention the coronavirus shot. Required vaccines include measles, mumps and rubella; diphtheria; pertussis (whooping cough); tetanus; poliomyelitis; and haemophilus influenzae type B.

As currently drafted, the bills would remove the religious exemption for everyone in sixth grade and under starting Sept. 1, 2022.