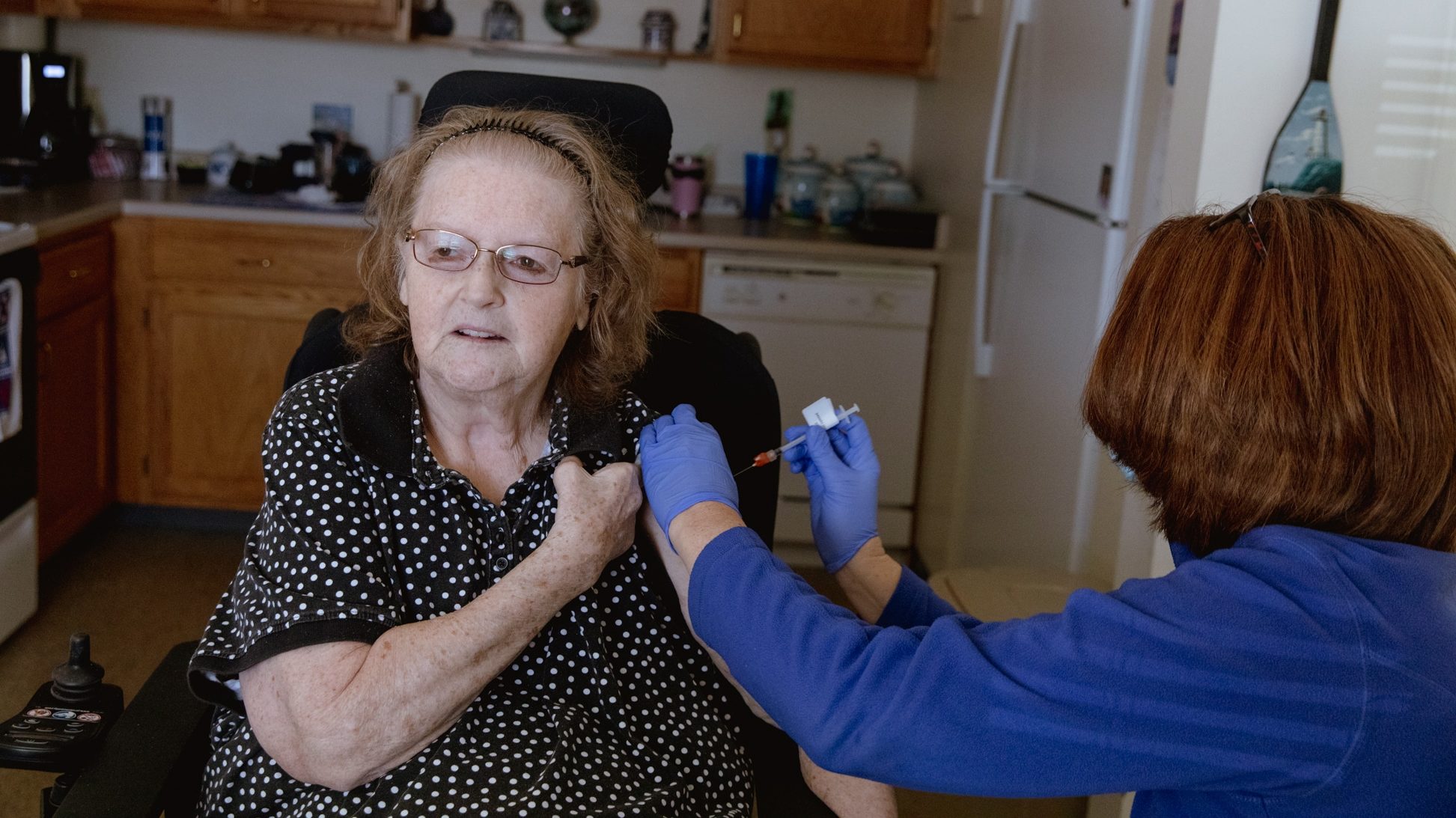 Joan Pennington, 73, gets the first dose of COVID-19 vaccine at her home. “It’s gratifying,” Pennington said.

The state launched a homebound vaccination program this week in which local health departments could be tasked with inoculating nearly 2,000 people who are “physically unable” to get to vaccination clinics.

The homebound option was added without fanfare to the state’s website in early March, but actual vaccinations didn’t begin until this week. Residents who wish to receive a vaccine at home must fill out a one-page form asserting they are “physically unable to go to a vaccination clinic or mass vaccination site with or without assistance.”

The form then asks for a home address, an e-mail address and a phone number. No referral from a doctor is required.

DPH spokeswoman Maura Fitzgerald said that filling out the form doesn’t guarantee someone a vaccine at their home. The local health department or whoever is designated as the primary contact with DPH is supposed to call each resident to determine if the person is indeed homebound.

The department tweaked the original sign-up form this week to include a warning at the bottom of the questionnaire reading: “Under penalty of perjury that the information included in this form is accurate. Submission of a false statement in this form to the Department of Public Health is subject to the penalties of false statements.”

Officials with the state Department of Public Health said 1,840 people have registered so far for the program. They did not provide a town-by-town registration breakdown for fear of identifying people from smaller towns but did provide a county-by-county breakdown.

The most requests – 634 — came from New Haven County. Fairfield and Hartford counties had 437 and 424 registrations, respectively.

Some local health directors, who are still in the process of vaccinating thousands of teachers, said they are concerned the system will be abused by people who don’t really need it and stressed the logistics of providing the service, particularly in rural districts.

“We’re still trying to plan if we could even do it. It’s going to be an enormous undertaking for a local health district,” said Robert Rubbo, director of the Torrington Area Health District.

DPH has told Rubbo he has 50 to 60 residents who need a vaccine at home in the 18 towns in his health district, which runs from Goshen to Thomaston and from Middlebury to Kent — creating a potential logistical nightmare, Rubbo said, because once a vial of vaccine is opened, it has to be administered in a certain amount of time.

Rubbo pointed out several other concerns, such as needing an adequate supply of the one-shot Johnson & Johnson vaccine so a second trip isn’t necessary; staff shortages that result from potentially assigning three-person teams to administer the vaccinations; and the need to alert local EMS in case someone has an adverse reaction.

“One person may be there in case there’s an adverse reaction, one person may be there to handle all the administrative data input for VAMS,” Rubbo said. “And if we’re going to be going out into a region to do four or five [shots], we’re probably going to want to reach out to local EMS to give them a heads-up that we’re in their area doing this, in the event that there is a reaction, so we can get good response times, because a lot of our communities have volunteer-based EMS response. ” 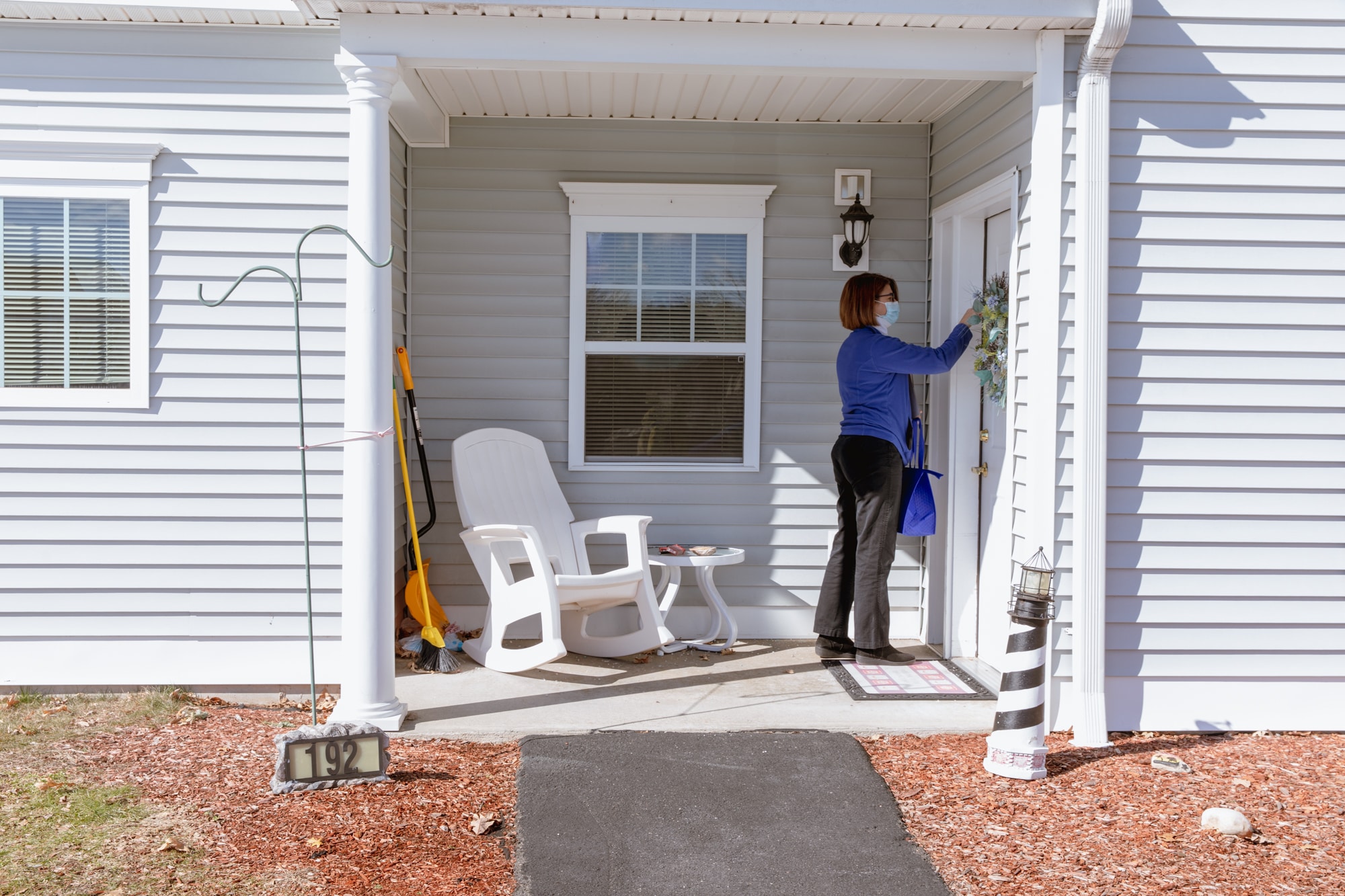 Bridget Kennedy knocks on the door of a housebound patient in Manchester. Staff at Hartford HealthCare at Home focused on vaccinating patients in Hartford and Bloomfield, said Andrea Griffith, vice president of business operation.

DPH officials informed local health directors in late February about the homebound vaccination program, another way state officials are trying to reach people who cannot get to clinics and to serve a vulnerable population. While there were already isolated attempts in individual communities to reach home-bound residents, such as Hartford HealthCare’s mobile clinic, this is the first state-wide effort.

Several health directors said they are not concerned about people cutting the line for a vaccine now that all residents 16 and up are eligible to register but are worried about the time and inconvenience of vaccinating homebound residents, especially if it turns out people were taking advantage of the system.

“We were concerned that people were going to say they were homebound yet they just have other issues why they weren’t going out, like they were nervous to be around other people or didn’t want to drive far to get vaccinated or didn’t have somebody to take them,” said Uncas Health District Director Patrick McCormack said.

The Uncas Health District comprises 11 towns and  is fairly spread out, with communities from Voluntown on the Rhode Island border to Lebanon. McCormack said 44 residents have scheduled visits.

McCormack said he’s already had a couple of questionable cases in Franklin.

“I had a call from the town of Franklin saying they had a couple that needed to be vaccinated at home, and when I called them back and said ‘You know, we want to get these people on the list,’ … they said ‘No, they got vaccinated,’” McCormack said. “I asked what happened, and they said the couple actually had a vehicle even though they had originally said they had no way to get to a clinic and were homebound.”

McCormack plans to reach homebound residents by using some of the area’s medical reserve corps to assist with the vaccinations.

“I’m still trying to figure out a way to come up with a schedule of homes that are close enough together so that you can do them in some organized fashion,” McCormack said. “It’s not like we’re going to do one person in Voluntown and then go do one person in Sprague because of the time and resources involved.” 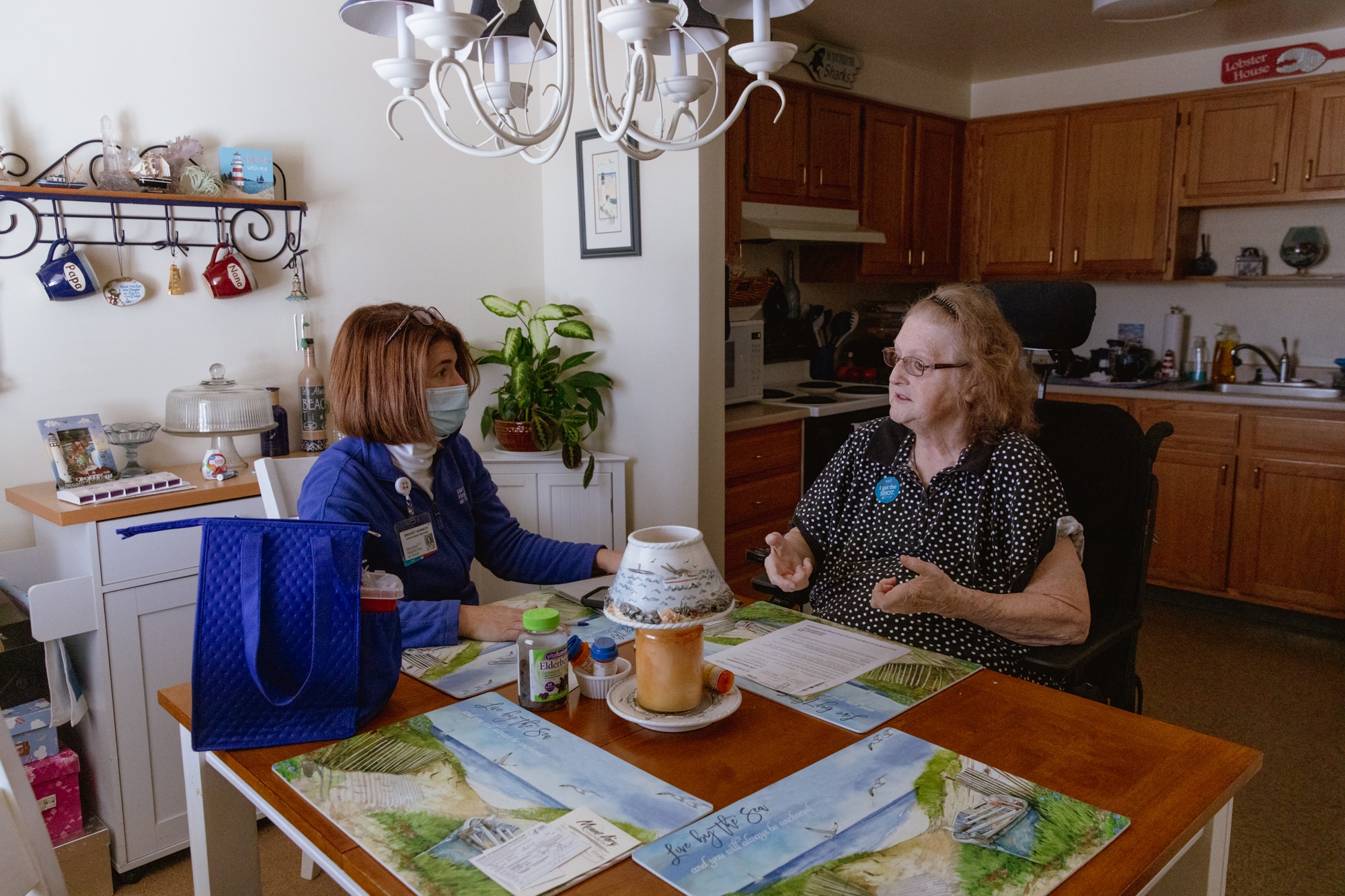 Bridget Kennedy, left, and Joan Pennington talk during the observation time after vaccination. “These homebound patients in particular have many comorbidities which put them at very high risk of, if contracting COVID-19, being hospitalized or even dying,” said Andrea Griffith, vice president of business operations at Hartford HealthCare at Home. “This program really was initiated because of that risk. These patients would otherwise not have the opportunity to make it out of their home, make it to a vaccination site to get vaccinated.”

Some health directors have asked their towns for help checking the forms submitted by residents who signed up and to be the primary contact with both DPH and the people who need to be vaccinated. Ledge Light Health District Director Steve Mansfield said each of the 10 towns in his district, located in New London County, has a point person.

“Offering vaccine to individuals in their homes is a tremendously resource-intensive mission, and LLHD will not be able to accomplish this task without assistance of our community partners,” Mansfield wrote in a memo to each town.

He cited many of the concerns others have — the limited amount of time once the vaccine vial is pierced, the need to have at least two people go to each home and stay for at least 15 minutes afterward, and possible difficulties obtaining consent from people who may have cognitive issues.

With everyone over 16 now eligible to be vaccinated, the people who signed up for the homebound program may have to wait a while for door-to-door service.

McCormack and Rubbo both said their estimated timetable to start vaccinating these residents is mid-April.

“We’ve been meeting with some partners over the past two weeks now. We’re trying to bring some Visiting Nurse Associations on board to help out with this if they’re willing,” Rubbo said. “There are a lot of little logistical things that we really want to iron out before we tackle this.”