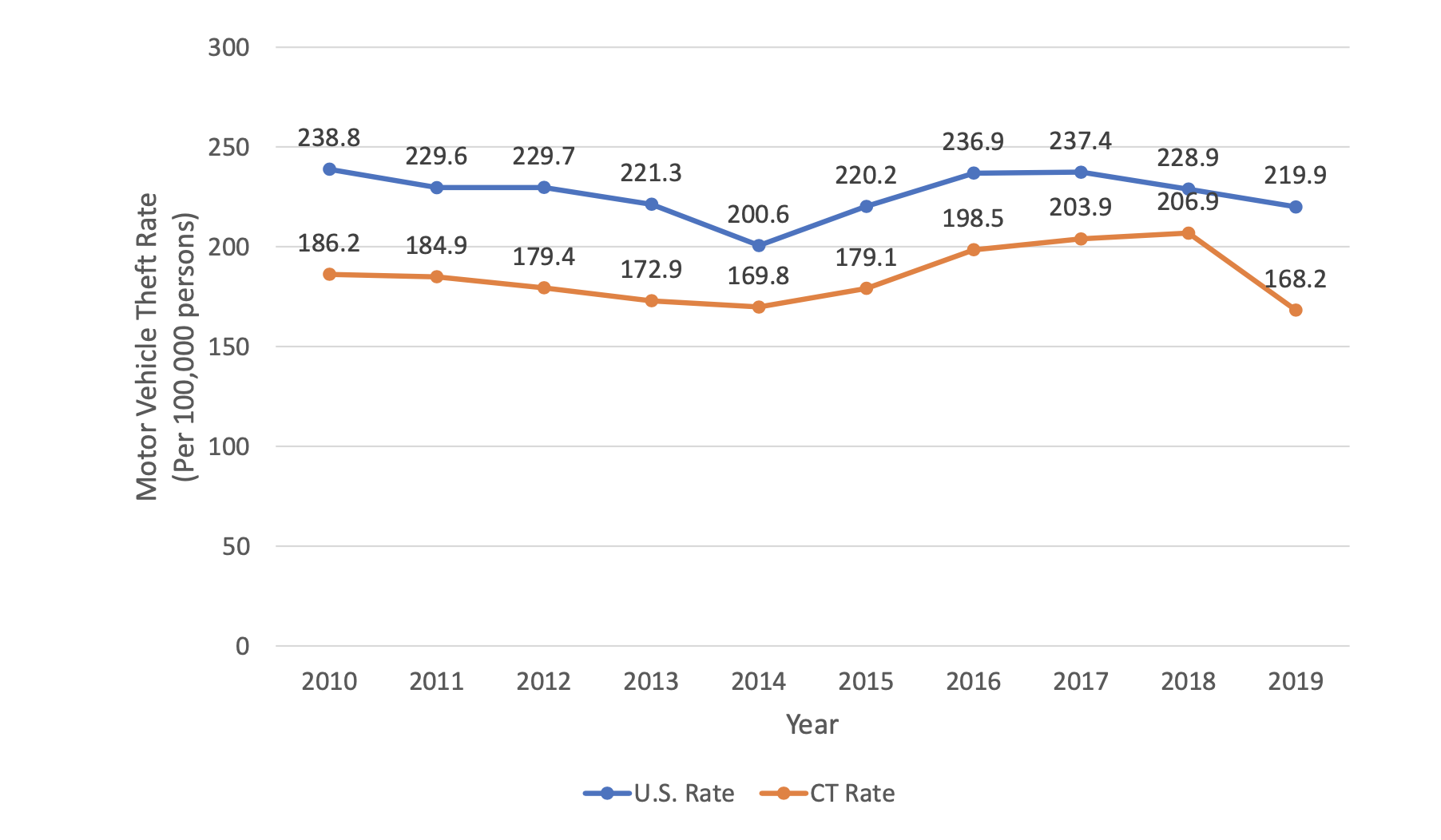 Connecticut’s motor vehicle theft rate dropped by a larger percentage than the national average between 2010 and 2019. Source: DESPP

The Judiciary Committee advanced two bills on Thursday that offer strikingly different approaches to addressing the needs of young people who commit crimes: one aimed at keeping youths out of the justice system by improving educational programs and diversionary programs, the other intended to hold young people accountable for stealing cars and punish adults who get youths to commit a crime.

“The philosophies behind these two bills are in complete opposition to one another,” said Christina Quaranta, executive director of the Connecticut Justice Alliance and a member of the Juvenile Justice Policy and Oversight Committee, the group behind one of the proposals.

“You can see that the thought process behind all of the pieces in the JJPOC bill is, ‘How can we best serve young people in their communities? What can we do to transform, and in some ways end, the criminalization of young people?'” Quaranta said. “And if you look at the car theft bill, it’s the complete opposite … It is punitive, and punishment, and thinking punishment will change behavior.”

One of the measures would make it a felony for anyone 18 or older to entice a child to commit a crime, would require the Judicial Branch to crunch data on police requests to detain youths, and would subject kids to electronic monitoring if they are charged with a motor vehicle offense when they already have another case pending. It would also add another factor that juvenile courts can consider when weighing whether a child poses a public safety risk and should be held before their case is tried: whether the charge involves a gun or a violent offense with a deadly weapon.

The other bill, based on recommendations made by the Juvenile Justice Policy and Oversight Committee, would raise the minimum age of the juvenile court’s jurisdiction from age 7 to 10; prohibit the use of chemical agents on children in prison; and establish a committee to develop a plan to phase in a ban on school suspensions and expulsions.

Rep. Robyn Porter, D-New Haven and member of JJPOC, said the bills stood in stark contrast to one another. One deals with the root causes of crime and attempts to give struggling kids what they need to thrive, and the other could lead to more children being put in detention.

“We’re trying to restore and heal kids and put them on a pathway to positivity,” Porter said of her work on JJPOC. “In my mind, what the car theft bill does is create more disparity and less equity. It’s not equitable because white kids are not going to be held to the same accountability as Black kids.”

The proposal would make a team to help the Department of Children and Families create an education unit, and it would require the creation of a system that standardizes the transfer of credits, so young people get credit for completing coursework while they are incarcerated. It would also erase certain juvenile records so their records don’t follow them for the rest of their lives.

Republicans expressed concern over the erasure section of the bill. Rep. Craig Fishbein, the ranking member of Judiciary Committee, said he was worried about erasing serious crimes from a young person’s record.

“In all candor, I started the day, I was going to vote for this. But this — I have a lot of trouble with that,” Fishbein said.

The process of erasure would involve a young person admitting they have done wrong and that they are trying to do better, said Rep. Toni Walker, D-New Haven.

“It’s looking for rehabilitation of our kids, as opposed to retribution,” Walker said. “We’re trying to salvage our children and make sure that they get out of the criminal justice system.”

Motor vehicle thefts have gotten a lot of public attention on social media community groups and from towns approving resolutions to ask the governor for more resources to address stolen cars.

After outlining the bill, Rep. Steven Stafstrom, D-Bridgeport and co-chair of the Judiciary Committee, emphasized that the bill was a product of a bipartisan approach.

“I have heard from many members on both sides of the aisle who are understandably concerned with the uptick in car thefts in some communities,” Stafstrom said. “We have endeavored over the last several months on this committee to work in a bipartisan way to try to put forward bills that both sides of the aisle care about and members from various communities care about.”

Stafstrom voted against the bill but said he likely would have voted to pass it out of committee if the votes hadn’t been there.

“There’s concern on the car theft issue across party lines,” he said after the vote. “It’s undeniable there’s been an uptick. Folks just have very different perspectives on how to address that.”

Stafstrom pointed out that the data don’t back up the narrative that car thefts are running rampant in Connecticut. Recently published research by the Institute for Municipal and Regional Policy at Central Connecticut State University showed car thefts in 2019 were at their lowest rate since the state started collecting data in 1985. Preliminary data from 2020 show there was an increase in motor vehicle thefts in Connecticut compared to the previous year, but those preliminary numbers from 2020 are still 3% lower than they were in 2018.

Additionally, the spike in car thefts last year occurred across the country, suggesting past legislative reforms passed by state lawmakers aimed at helping children ensnared in the criminal legal system did not lead to rampant car thefts.

Multiple members of the public submitted written testimony in favor of the car theft bill, House Bill 6669, stating that they endorse measures that “give law enforcement officers and the courts the tools they need to stop future crimes.”

Others warned that allowing young people who steal cars to skirt incarceration could make them more inclined to commit crimes.

“It would be far better to impose punishment upon those committing these crimes initially than to wait until they have adopted such behavior as a permanent lifestyle,” one woman warned.

“This specifically is for repeat offenders,” said Rep. Rosa Rebimbas, R-Naugatuck. “This would come into play with those individuals who, sadly enough for one reason or the other, continue to steal vehicles.”

Notably, IMRP’s research showed that as motor vehicle thefts have declined in Connecticut’s major cities, they have increased in surrounding suburban communities. That fact was not lost on Porter, who pointed out this has been a problem in urban communities for decades, but now that it is creeping into suburban, white communities, the legislature has chosen to act.

“There are Black kids, brown kids, white kids, all kids — this is childhood behavior. So, it’s not a matter of just poor kids committing these crimes,” Porter said. “But we know this country, this state, we don’t prosecute people the same.”

Porter said racial disparities permeate the justice system, in arrests, charging and sentencing decisions. If legislators pass a law that creates a new crime, as the car theft bill does for 18-year-olds who entice a minor to commit a crime, Porter expects Black and brown people to be disproportionately affected. She said the bill might “look good on the surface, but we know when you start to peel the layers back on this onion, it’s the stuff that makes Black mothers cry. It’s our babies that are being arrested.”

The bill passed out of committee 21-17. Rep. Jillian Gilchrest, D-West Hartford, echoed several of her Democratic colleagues, saying she voted the bill out of committee to continue the conversation but reserves the right to vote no when the bill comes up for a vote later. She said she struggled with several aspects of the bill but hopes the measure can be used as an opportunity to fund community programs that reduce violence and high-risk behaviors.

“I, too, have many reservations about this legislation. I think there are much better ways to go about addressing this issue,” Gilchrest said. “As a state representative from West Hartford, this is a concern in my community. That said, I would agree that more things can be done, like locking our doors in our driveways.”