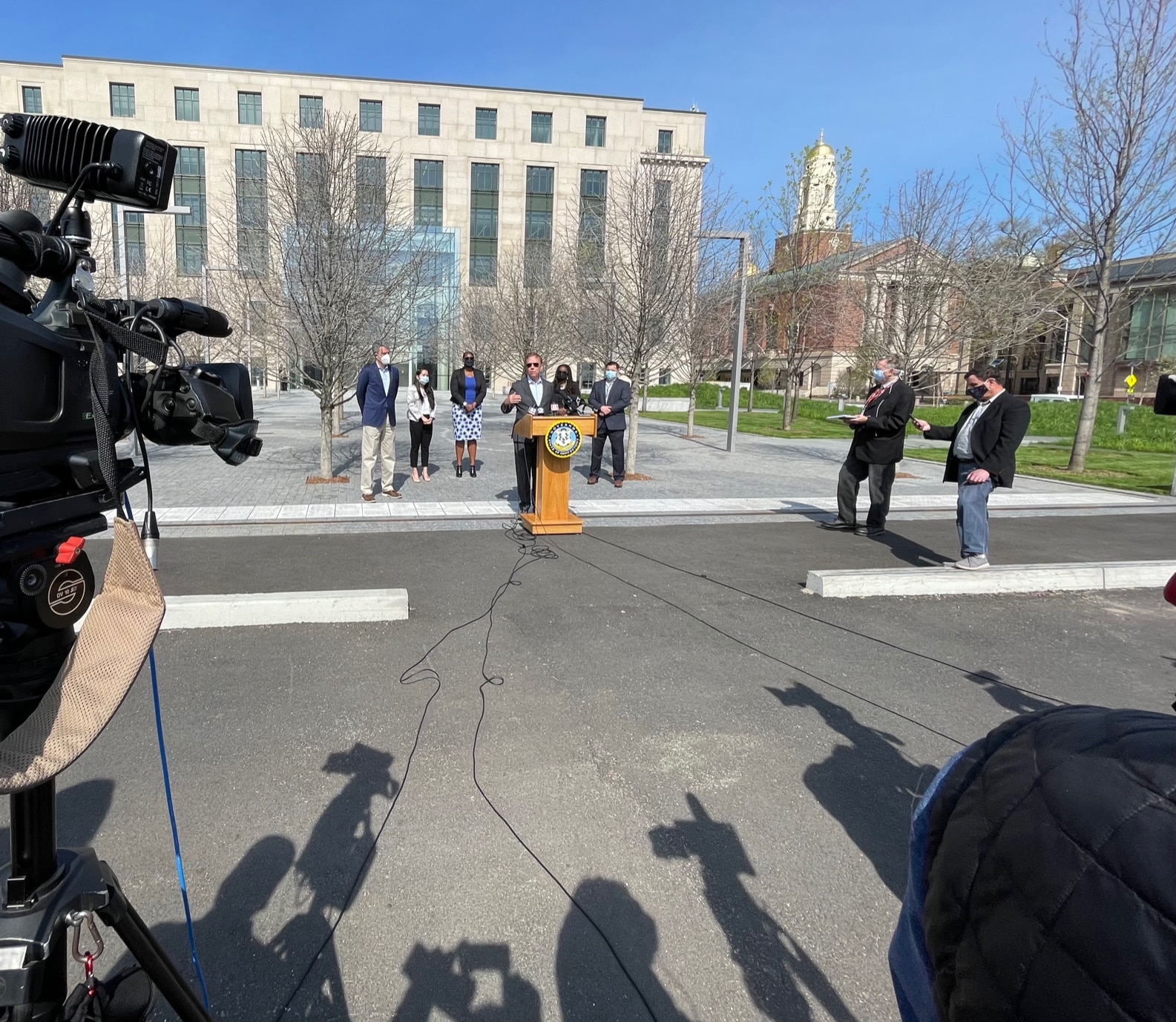 With the refurbished State Office B building as a backdrop, Gov. Ned Lamont celebrated advances in personnel practices.

Gov. Ned Lamont and his chief operating officer, Josh Geballe, took a break Tuesday from the daily slog of managing the COVID-19 pandemic to engage their inner nerds and celebrate delivering on a campaign promise you may have forgotten.

That would be the promise to modernize state government, one that generated no headlines or controversy in a 2018 campaign that offered Connecticut gubernatorial voters three flavors of business executive: Democrat, Republican and unaffiliated.

Outside the refurbished State Office Building, Lamont and Geballe talked about progress in the battle to modernize Connecticut’s ossified and redundant personnel system, one of the below-the-radar projects Lamont assigned to Geballe, a former IBM executive.

By centralizing human resources functions that used to operate independently in nearly every state agency, Lamont said, the state has consolidated 140 personnel positions into 70.

The Lamont administration has upgraded information-technology systems and overhauled purchasing procedures that seemed designed to intimidate and discourage vendors.

Geballe said a new online portal at the Department of Motor Vehicles is now used by one-third of the agency customers in renewing their licenses.

Geballe was hired in the first weeks of the administration as the commissioner of the Department of Administrative Services, the agency that acts as the landlord, purchasing agent, information-technology provider, construction manager and personnel department for all of state government.

A year later, Lamont broadened Geballe’s role by giving him the additional title of chief operating officer, bringing the back-water tasks of DAS into the governor’s suite, a move branding modernization as a priority of the Democratic governor, who has an MBA from the Yale School of Management.

“He wants this to be part of the legacy he leaves the state of Connecticut, that we are running this state in a more modern, more efficient way,” Geballe said. “We’re providing better services to people. It’s not always the most glamorous work, but it’s something that he put the stake in the ground very early on.”

Government efficiency has taken on a higher profile in anticipation of a wave of retirements.

A report released last month by the administration says 8,000 of the 30,000 executive-branch employees are eligible to retire by July 1, 2022, when retirement benefits will be reduced under the terms of a 2017 concession deal. A survey found about 70% of the eligible workers were leaning toward retiring.

The Boston Consulting Group report identified as much as $900 million in potential savings in executive agencies with total budgets of $14 billion, while acknowledging the significant obstacles to making changes in one of the most heavily unionized public-sector workforces in the United States.

“We got a pretty good study going forward,” Lamont said. “It confronts reality. We take the very best ideas, see how we can implement them. I know people belittle these studies, but what they do is they give you some of the best practices from around the rest of the country.”