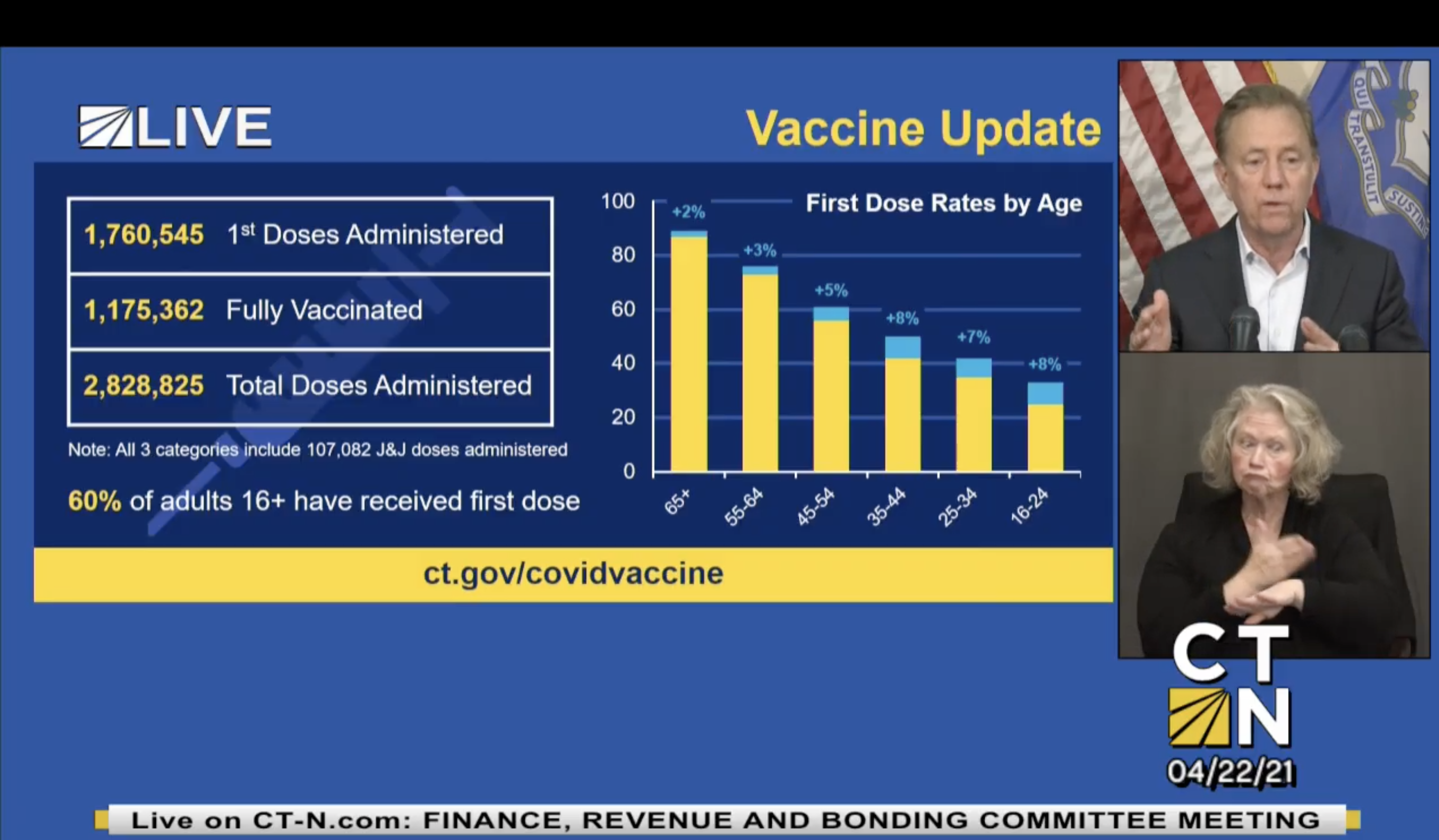 As the demand for COVID-19 vaccinations begins to ebb, Gov. Ned Lamont on Thursday encouraged employers and labor officials to incentivize workers to get vaccinated.

“Supply is now more than demand in many places,” Lamont said. “You can often go right online and get an appointment.”

More than 60% of Connecticut residents 16 and older have received their first dose of a COVID-19 vaccine, and more than half of eligible residents have gotten both shots, Lamont said at his twice-weekly press conference. Compared to states like Georgia and Alabama, where vaccination rates are around 30%, Connecticut’s performance is encouraging, the governor said.

But demand is lessening, Lamont said. For instance, mobile vaccination clinics that used to give 140 doses in a day are now administering 15 doses daily.

Enter the business and labor communities.

“Getting people vaccinated is critical to both the health crisis and the economic crisis that COVID has rained down on the state and the country,” said Chris DiPentima, the CEO of the Connecticut Business and Industry Association, said at the governor’s briefing.

DiPentima said employees were excited about the state’s restrictions ending on May 19, making them “charged up and incentivized to get vaccinated.”

Lamont said he’s heard of businesses offering incentives for their staffers to get vaccinated, including free lunches, time off, gift cards and raffles.

“Business and labor from time to time tend to butt heads. Not always, but it happens,” Roche said. “But we also know how to come together when we know what’s best for the state and everyone who lives here.”

Wednesday’s COVID-positive test rate was 1.78%, and the seven-day rolling average is 2.5% — “probably the lowest it’s been in a month and a half,” Lamont said. “So we still feel like we’re on very stable footing there.”

Lamont said hospitalizations peaked a year ago, when 1,972 people were hospitalized with COVID-19. On Thursday, there were 515.

“We were losing, many days, over 100 people a day,” Lamont said, noting there were a dozen COVID-associated deaths since the last day of reporting. “So I still continue to be confident that the vaccinations are making a difference.”

Nationwide, prison and jails have been COVID-19 hotspots during the pandemic, congregate settings where social distancing is virtually impossible. More than 4,400 people in Connecticut correctional facilities had contracted the virus as of April 16. Nineteen have died.

Corrections systems in other states have explored ways to incentivize the incarcerated to get vaccinated. The Massachusetts Department of Correction offered 7.5 days in “good time credit” in exchange for prisoners getting both doses of the shot, watching educational videos and reading informational flyers. That policy was later rescinded after the DOC’s memo was made public because it was “not consistent with the Administration’s policies regarding reduced prison terms,” a spokesperson told WBUR.

North Carolina rolled out a similar policy, offering prisoners five days off their sentences if they got the shot. They also received extra visits from family and friends and a free 10-minute phone call.

Officials in Pennsylvania, meanwhile, are offering a $25 commissary credit to incarcerated people who get vaccinated. The money can be used to purchase clothes, food or other items. The program was so successful that more than 70% of people in two prisons opted to get the shots. The compliance stands out, given that only about a quarter of the incarcerated population gets vaccinated for the flu, according to Spotlight PA.

More than 4,360 people in Connecticut prisons and jails — less than half of all people in state correctional facilities — have been vaccinated as of April 21. Lamont was open to the possibility of incentivizing the incarcerated population to get the shot.

“I’m interested in incentivizing everybody to get vaccinated, and that includes people in congregate settings; that includes folks in our correctional facilities,” Lamont said. “So, let me think about that. If it makes everybody in that facility safer, maybe it’s something we ought to think about.”

Officials from the Centers for Disease Control and Prevention and the Department of Public Health are meeting Friday to decide how to proceed with administering the Johnson & Johnson vaccine, which officials paused after six of the 6.8 million people who got the shot developed a rare form of blood clots and low platelet counts.

If authorities approve resuming the vaccine, the Department of Correction will begin using the Johnson & Johnson vaccine at its intake facilities, a spokesperson said Tuesday. If the pause remains in effect, the DOC will begin administering the Moderna vaccine at those facilities next week.

Roughly 30% of the vaccines given to the incarcerated so far were administered in jails, where many people are held before trial and turnover is higher, not prisons, where people are primarily serving sentences after their cases are adjudicated.

The agency had been planning on administering the single-shot J&J vaccine to many of those who are held pretrial in Connecticut jails, accelerating the rollout in correctional centers. Because turnover in the jails is higher than in the state’s prisons, officials said a single shot would have been less complicated than scheduling follow-up inoculations weeks after the first doses, potentially after people had already been released.

Of the 4,362 people in correctional facilities who had gotten their first dose of the COVID-19 vaccine, 240 had been discharged. The DOC said those who were released from custody were educated about the importance of getting their second shot, and were given a list of locations where they could get a second shot.