A Hartford minister takes a U.S. senator on a grim tour 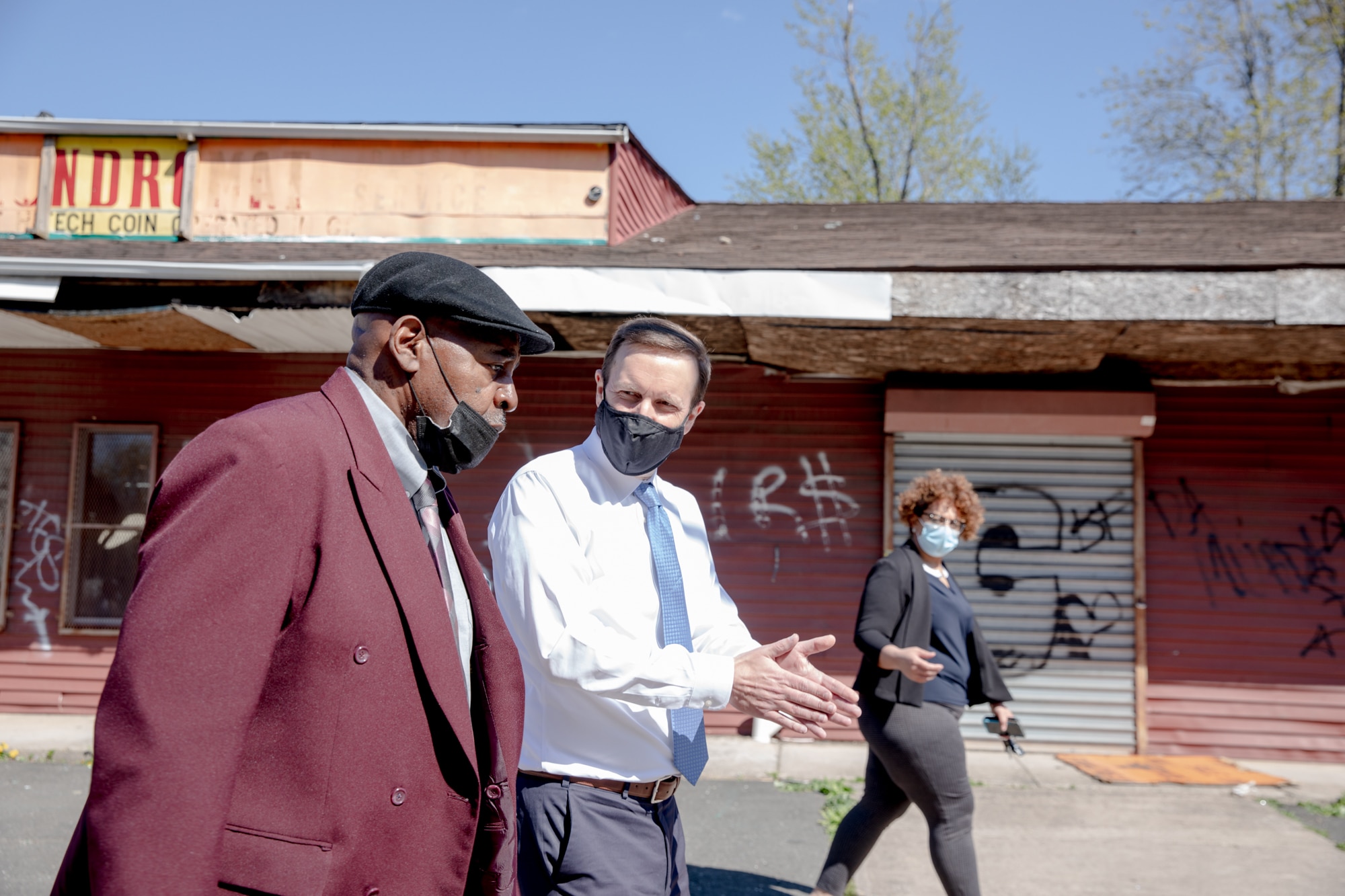 Sen. Chris Murphy, center, talks to the Rev. Henry Brown on a tour of the scenes of recent shooting deaths in Hartford, including 3-year-old Randell Jones.

HARTFORD — The leading proponent of gun control in the U.S. Senate could bring only condolences to the mother of the three-year-old boy shot to death two weeks ago.

Sen. Chris Murphy met with Solmary Cruz, the mother of the slain toddler, Randell Jones, in a private meeting arranged by the Rev. Henry Brown, an activist who once heckled Murphy as insufficiently engaged on urban violence. Brown is a co-founder of Mothers United Against Violence.

They talked about violence, the ease of a teenager obtaining a gun in America, and the difficulty of convincing a divided Congress to regulate the sale of firearms. It was Friday afternoon, around the same time her son was fatally wounded on April 10, a Saturday that saw two boys killed in Connecticut’s capital city.

Then Murphy and Brown toured the neighborhood, starting at the corner bodega where Randell was shot while sitting in a parked car with his mother, two siblings and a man police assume was the intended target of the daylight driveby attack.

Joining them were some of the women in the collective Brown simply calls “the mothers,” a sorority of the forever grieving. The mother of Randell Jones did not join them. Too soon, Brown said.

He was talking about violence, not the prospects of a passing a compromise version of H.R. 8, the gun-control bill recently passed by the House. It would require universal background checks before the sale of any firearm in the United States, even among family members.

“I don’t think it’s a secret that a universal background checks bill like H.R. 8 can’t pass the Senate right now,” Murphy said. “It’s more likely that we can get consensus around background checks on commercial sales.”

He would like commercial sales to reach beyond federally licensed firearms dealer to private sales conducted at gun shows and online, two major loopholes in the current requirement for background checks.

Murphy said he spent much of the congressional recess in search of Republican votes, a necessity in a chamber where each caucus has 50 members and 60 votes are necessary to evade a filibuster.

“I’ve talked to at least half of the Senate Republican conference, and a surprising number of them are open to a potential compromise,” Murphy said. “The sort of tone I’m hearing from Republican senators is very different than what I heard in five or six years ago. I think, especially with the NRA potentially down for the count, a lot of them see a potential path forward.”

The NRA is in bankruptcy, and Murphy said the organizations’s pledge to spend $2 million in advertising opposed to further gun controls — along with the confirmation of President Joe Biden’s nomination to lead the Bureau of Alcohol, Tobacco and Firearms — is evidence of weakness.

“If I were them, I wouldn’t have planted a story about a buy that essentially telegraphs that they have no money. A national $2 million buy is like a needle in a mile-high haystack,” Murphy said.

Murphy said Randell’s siblings were casualties, even if spared being shot.

“I won’t go into details about it,” said Murphy, the father of two boys. “But those kids are dealing with something that’s unthinkable.”

Henry Brown played a memorable role in Murphy’s first days as a U.S. senator in January 2013.

In a scene witnessed by reporters and recounted in a book Murphy published last fall, the Black minister scorned Murphy at a community meeting as a white dilettante disinterested in gun violence until it claimed the lives of 26 educators and children at Sandy Hook. 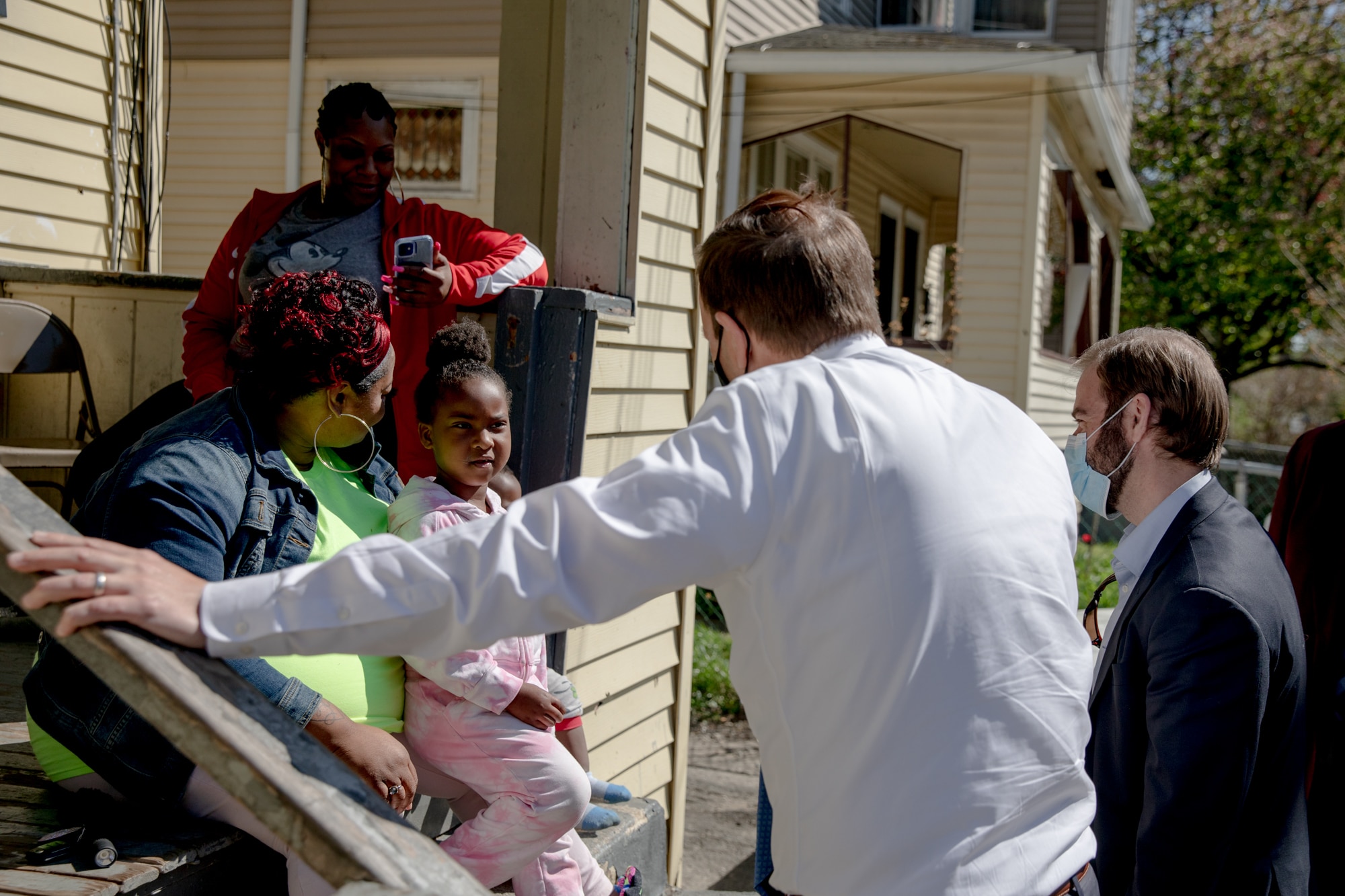 His book, “The Violence Inside Us: A Brief History of an Ongoing American Tragedy,” is as much about racial inequity as violence. On Friday, in his conversation with the mothers, he learned that the fear of the simplest conflicts turning violent causes parents to send their children away.

“It’s so impossible to calculate how big this problem is,” Murphy said. “It’s not just the kids who get shot. It’s not just their relatives, it’s all these kids who, in the middle of the school year, literally have to flee the city because they’ve been threatened or they’re in a dispute. And moms and dads are so certain that that’s gonna lead to gun violence that they send their kids away from home. I mean, it’s just something that a family in Avon has zero conception of and yet is a daily reality here.”

Eight years have passed since the day Brown schooled Murphy and Sen. Richard Blumenthal at a community center in the city’s North End, a few blocks from La Caribena.

Brown’s complaint in 2013 was that mass shootings generate headlines, but the steady loss of young Black men and children on corners like Nelson and Garden often go unnoticed, even when one is three-years-old.

“I think now that the senators got it,” Brown said. “I think the president got it. And I think that now is the time for these changes to happen. If we don’t get it done now, we’re not gonna get it done.”

Lobbying for change is only a part of Mothers United Against Violence, a group known for public vigils and marches. When there is another shooting, another death of someone’s child, the mothers reach out without fanfare.

They came to Deborah Davis on a January day after her 20-year-old son, Phillip, was shot to death by another young man, a friend who told the police they were taking turns dry-firing what they thought was an unloaded gun.

“They were the only ones that came to my house — and right at the beginning. You really needed that. And they stayed with me,” Davis said, referring to the talks and calls that followed and continued.

That was 11 years ago. On Friday, Davis walked with Murphy, Brown and Mayor Luke Bronin, occasionally stopping to chat with women sitting on steps, enjoying the afternoon sun. She told one woman, who sat with toddlers, about the mothers.

Davis wore a blue windbreaker with the Mothers United logo, as did the others on the tour. The walk was a gesture.

“it means that our senator, our mayor, they have to be thinking about us,” Davis said. “They have to give us some care. And that they’re demonstrating that they want to be here with us, you know, at the moment. And then they see literally what’s happening in our city. They see how folks are sometimes living.”

They walked south on Garden Street, a high-rise  headquarters of a Fortune 500 company, The Hartford, visible at the end of the street. Then it was over to Enfield Street towards Magnolia, where 16-year-old Ja’Mari Preston, 16, was shot and killed about two hours after Randell Jones.

Brown and some of the mothers were out that day, responding to Randell’s shooting, when they heard rapid gunfire on Magnolia. “We were right here,” Brown told Murphy.

On Enfield, they passed a shrine, a collection of votive candles and deflated Mylar balloons. It marked the spot where a 34-year-old man was shot to death in what police said was an exchange of gunfire with members of a federal anti-crime task force in January.

Later came the vacant lot, where Davis made them stop. She told Murphy was the spot last month where 30-year-old Alton Veal was shot to death. They didn’t make it all way to Magnolia.

Murphy was recovering from knee surgery, a car arrived and he bid the group goodbye. There was no heckling from Brown.

Brown and the women gathered in a circle, joined by a Hartford police officer, for a prayer before leaving. They prayed for justice, for the children and the men and women in their lives. 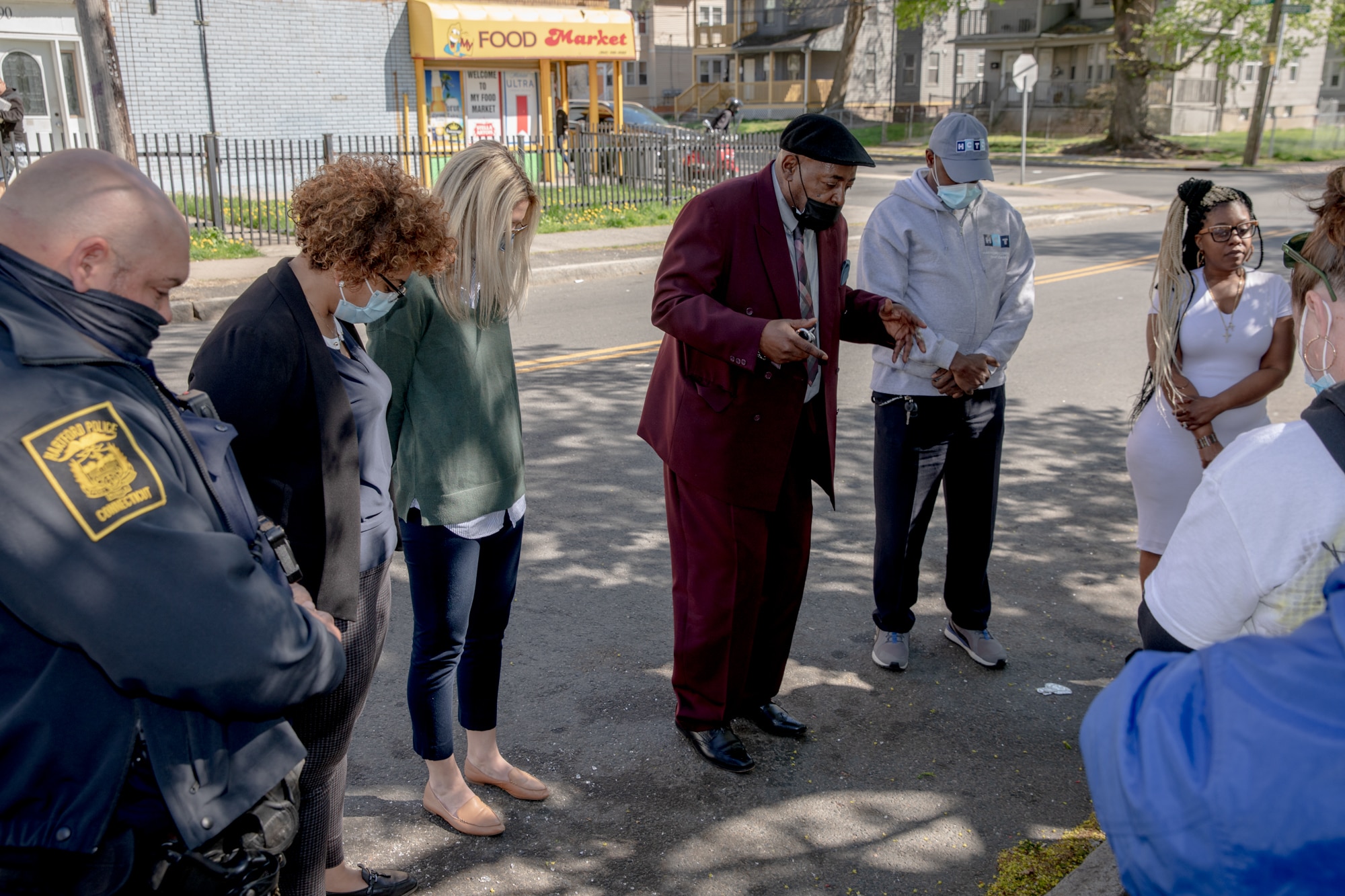 Rev. Henry Brown, center, leads a prayer at the end of their walk.