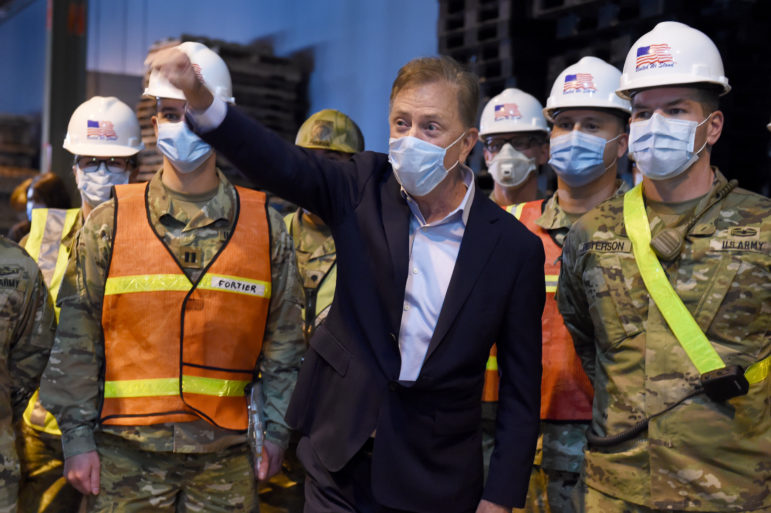 Gov. Ned Lamont and members of the Connecticut National Guard.

Gov. Ned Lamont put the state’s largest healthcare workers’ union on notice Tuesday evening that he’d made his last and best financial offer to avert a strike threatened for Friday.

The governor’s chief of staff, Paul Mounds Jr., also used a virtual news conference to challenge SEIU District 1199 New England and more than three dozen congregate care facilities to remain at the bargaining table and hammer out a deal.

The $280 million, two-year package the administration disclosed publicly Monday “was the best and final offer proposal which would be presented,” Mounds said, adding “this is a very fair, aggressive and honest offer that has been put forth by the governor.”

About 4,000 members of District 1199 spread across 39 nursing homes have warned of their intent to strike. Workers at 33 facilities are set to stop work Friday, with those at the remaining six homes setting a strike deadline of May 28. Employees at more than 50 homes have been working under contracts that expired in March and are insisting on a major pay adjustment, plus enhanced benefits and staffing levels.

Technically they are negotiating with nursing home owners, but since these facilities receive the bulk of their revenue from the state in exchange for serving Medicaid patients, Lamont and the legislature have a bit role to play in this drama.

The governor disclosed Monday that he proposed a $280 million funding boost for the industry that includes:

Lamont’s budget director, Melissa McCaw, said the $280 million investment spread over two years would, on an annual basis, represent four times the increase in nursing home funding that the industry has averaged since 2007.

But that date also marks the start of what many economists call the Great Recession, and when it ended in late 2009, it was followed by one of the most sluggish recoveries in state history. Connecticut lagged the rest of the nation and never recovered all of the jobs or wages lost during that period.

In other words, few segments of state spending saw any significant increase during that period, and nursing home funding within the state budget averaged just 1.1% growth between 2007 and 2021.

And now, union leaders say, the coronavirus has changed everything.

An industry whose caregivers are predominantly poor Black and Hispanic workers has been provided inadequate compensation and benefits for many years, and the pandemic has made many of those jobs intolerable, they say. District 1199 officials say 22 of their members died due to COVID-19 and hundreds more became sick because of it.

“We are facing a critical situation in the nursing home industry with workers trapped in poverty,” Baril wrote. “Operators cannot find enough job applicants to hire at current industry wages. The reduced staffing teams of existing nurses, assistants and other supports bear the brunt of ruthless workloads, and vulnerable patients and residents get less time of direct care.”

“The last best offer from the administration is not the conclusion of the appropriations process,” Matthew Barrett, president and CEO of the Connecticut Association of Health Care Facilities, said after Mounds’ press conference. “We don’t have a final [state] budget yet, and as long as the final appropriation is pending, all parties should stay engaged in the process, at the bargaining table.”

But Barrett, whose association represents more than 140 nursing homes — including all 39 at risk of a strike — added that his appeal wasn’t aimed solely at the union but also includes the Lamont administration and the General Assembly.

Also Tuesday, Lamont disclosed that he formally notified the Connecticut National Guard on Monday to be prepared in the event nursing home workers at 33 facilities strike as planned Friday.

But the governor’s communications director, Max Reiss, described the letter more as a standard precaution rather than an indication that some nursing homes had failed to adequately prepare for a work stoppage.

“I authorize you to immediately call up a sufficient force of members of the armed forces of the state to support as needed the Department of Public Health in protecting the public health and safety in response to any potential work stoppage or strike of workers at long-term care facilities or other congregate settings in the state beginning on or about May 14, 2021,” the governor wrote Monday to Major General Francis J. Evon, Jr., the adjutant general for the state’s Military Department.

The National Guard could be needed, in the event of a strike, only if targeted homes haven’t secured adequate replacement staffing. In that event, National Guard members might be needed to transfer residents from a home with insufficient workers to a better-staffed facility. They also will help state health officials monitor nursing home operations in the event of a work stoppage.

All facilities notified about a strike must submit contingency plans to the state, and Department of Public Health spokesman David Dearborn said Tuesday those plans are under review.

Putting the National Guard on alert, Reiss said, was not necessarily an indicator of insufficient plans but merely a step to ensure all nursing home residents are guaranteed “an adequate standard of care” regardless of what happens Friday.

DPH Commissioner Deirdre Gifford said her agency has approved about two-thirds of the strike readiness plans submitted by targeted nursing homes, adding she is confident that others will be modified if necessary and approved before Friday.

Nursing homes must follow all safety and infection control measures regardless of whether there is a strike, she said, and COVID-19 testing and vaccination programs will continue, even if implemented by temporary employees filling in during a work stoppage.

“We’re just beginning to turn the corner in our nursing homes after an unbelievably difficult year,” Gifford added, noting that last week was the first in Connecticut since last fall that no coronavirus-related deaths occurred in nursing homes. “So we really strongly urge the parties to avoid this strike. It will be very, very disruptive for the families of residents and [for] workers, and that can be avoided.”

And while no deal had been reached by mid-day Tuesday, Ritter said he remains optimistic.

“I think they’re close,” the speaker said, adding he wasn’t dismayed that the union’s wage request and Lamont’s counter-offer were far apart.

“That’s how everybody negotiates now,” Ritter said, urging both sides to strive for middle ground. “Tell people what you want. Tell them what a fair deal is, and they’ll probably get it.”